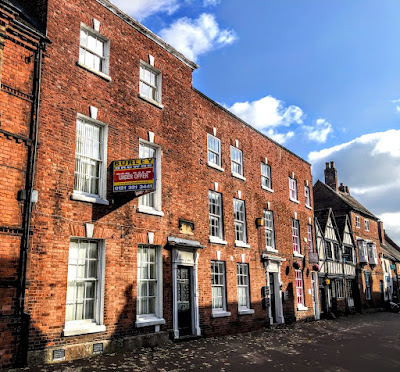 Brooke House on Dam Street, Lichfield … on sale and with links to a dramatic shooting in the English Civil War (Photograph: Patrick Comerford, 2021)

During my strolls around Lichfield this week, I noticed that one of Lichfield’s historic houses is up for sale.

Brooke House, at 24 Dam Street, is half-way between Lichfield Cathedral and the Market Place, and close to both Minster Pool and Stowe Pool. It is currently ‘under offer’ and is being sold freehold through Burley Browne, Chartered Surveyors, of Sutton Coldfield.

Brooke House is a three-storey over-basement building, with a mix of offices and meeting rooms and office areas totalling 265.46 sq metres (2,858 sq ft). Burley Browne were inviting offers of around £495,000, and a virtual tour is available through the marketing brochure on the site HERE.

The house was given listed status in 1952, and the brochure produced by Burley Browne says it is embedded into the history of Lichfield. It takes its name from a dramatic moment during the siege of Lichfield in 1643, and, for me, it also recalls 17th century links between the Comberford family and the Dyott family of Lichfield.

Brooke House takes its name from Richard Greville, Lord Brooke, a general who led the Parliamentarian forces against the Royalist troops during the first siege of the Cathedral Close in Lichfield during the English Civil War in March 1643. He was killed by a sniper firing from the central spire of Lichfield Cathedral on 2 March 1643, an event recalled in a plaque above the front door.

Although the present building is 200 years old, the plaque above the front door is much older and dates from an earlier house on the site. The plaque was commissioned by Richard Greene (1716-1793), who established the first Museum in Lichfield and who was a kinsman of Samuel Johnson.

‘March 2nd 1643 Lord Brooke, a general of the Parliament Forces, preparing to besiege the Close of Lichfield, then garrisoned for King Charles the First, received his death wound on the spot beneath this inscription by a shot in the forehead, from Mr Dyott, a gentleman who had placed himself on the battlements of the Great Steeple to annoy the besiegers.’

I am amused by the idea thant any ‘gentleman’ would climb the walls and spires of Lichfield Cathedral merely ‘to annoy’ his political opponents. Indeed, looking from the doorway of Brooke House north through the trees to Lichfield Cathedral, it is hard to imagine how anyone on the cathedral spires could see, never mind aim at, someone standing in the door of Brooke House on Dam Street. But the deadly shot is said to have been fired by a deaf-mute, John ‘Dumb’ Dyott, who was a godson of the Royalist High Sheriff of Staffordshire, William Comberford of Comberford Hall and the Moat House, Tamworth.

John Dyott was also a brother of Sir Richard Dyott of Lichfield, one of three members of the trust into which William Comberford placed all his interests in the Comberford estates on 16 May 1641. The three trustees were Sir Richard Dyott of Lichfield, John Birch of Cannock and Thomas Wollaston. The trust was formed to ensure that Comberford Hall and other the estates remained in the hands of the Comberford family in the face of a looming political and civil crisis in mid-17th century England.

William Comberford appears to have lived in Lichfield at the time, drawing on his neighbours in the city to form trusts that secured his interest in the mortgaged Comberford estates, acting as godfather to the children of many leading citizens in Lichfield, and leaving bequests to them at his death.

As the civil war unfolded, Colonel William Comberford was appointed High Sheriff of Staffordshire. On 2 February 1643, he wrote from a besieged Stafford to his kinsman Ralph Weston of Rugeley, asking him to send ‘with all speed to Lichfield’ for muskets and fowling pieces to help in the defence of Stafford. 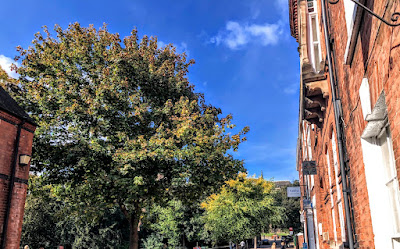 It is hard to imagine how a shot from the cathedral spires could kill someone in Dam Street (Photograph: Patrick Comerford, 2021)

The Parliamentary assault on Lichfield in March 1643 was led by Richard Greville, 2nd Lord Brooke, and Sir John Gell. Brooke was notorious for his hostility to the Church of England. As he was leaning out the window of a house in Dam Street, he was hit by a deflected bullet in a shot fired from the central tower of Lichfield Cathedral fired by John ‘Dumb’ Dyott. The incident took place on 2 March, Saint Chad’s Day, and because of this coincidence the accidental killing of Brooke was quickly hailed as a miracle by the Royalists.

However, Lichfield was captured by the besieging parliamentary forces three days later, on Sunday 5 March 1643. During the fighting that ensued in Lichfield, two people from Comberford died as they fought on the Parliamentarian side: Richard Waughton of Comberford was killed as he took part in building a trench on the west side of Lichfield, outside the Cathedral Close, and he was buried in Saint Editha’s Church, Tamworth, on 21 March 1643; Thomas Riccard of Comberford died in fighting in the Cathedral Close.

William Comberford then took a royalist force to garrison Tamworth Castle for the crown. As High Sheriff, he issued a warrant for the seizure of the estate of his neighbour, the Lord General and Parliamentarian commander, Robert Devereux of Drayton Bassett, 3rd Earl of Essex, who also held the lordship of the Manor of Lichfield. The House of Commons moved on 4 April 1643 to compensate Essex with the estate of the royalist Lord Capell, who was later beheaded. The House of Lords concurred with the Commons on 26 May, saying Essex had been ‘plundered, robbed, and spoiled, of his Goods and Estate, amounting to a great Value, by divers Traitors and Rebels’ under a warrant issued by ‘William Comberford, the pretended High Sheriff of the County of Stafford.’

During the siege of Tamworth in June 1643, Comberford and his supporters sought refuge with the Ferrers family in Tamworth Castle. The siege of the castle lasted just two days before the castle was captured by a parliamentary detachment commanded by Colonel William Purefoy. After the fall of Tamworth, as the Moat House was being sacked, William Comberford escaped to Lichfield, where once again he joined the royalist army defending the city against a new siege.

The exhibits in Richard Greene’s ‘Museum of Curiosities’ in Lichfield included ‘Part of the Porch, under which stood Lord Brooke General of the Parliament forces, when he receiv’d a mortal wound in his forehead, by some shot from the Battlements of the great Steeple of the Cathedral Church of Lichfield, the force of which was abated by the bullets passing through the above piece of Board.’

The local historian Kate Gomez of Lichfield Discovered suggests Greene’s ownership of this piece of Lichfield history inspired Greene to commission the plaque above the door at Brooke House. 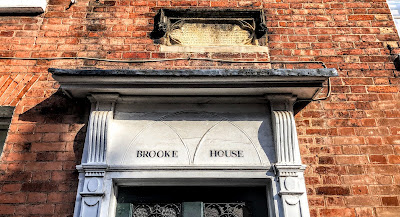 The plaque and name above the front door of Brooke House (Photograph: Patrick Comerford, 2021)