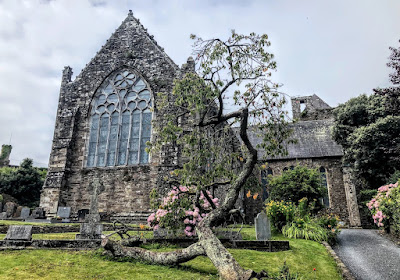 The charms of West Cork, with its small towns, harbours, bookshops, cafés and offshore islands, are well-known. But during this year’s ‘road trip’ or summer ‘staycation,’ I also rediscovered the charms of Youghal, in east Cork Cork, on the estuary of the River Blackwater, and 30 km south of Cappoquin, which holds so many of my childhood memories.

Youghal, with a population of about 8,000, stands on the edge of a steep riverbank, and has long, narrow streets and narrow side lanes. The town dates back to a Viking settlement in the 11th century, and received its first charter in 1209.

Canon Andrew Orr, and two parishioners, Lydia Mossop and Norman McDonald, offered a personalised tour of Saint Mary’s Collegiate Church, the largest and most important mediaeval building in Youghal and one of the largest churches in Ireland.

The church may stand on the site of a monastic settlement associated with Saint Declan of Ardmore, ca 450. It was rebuilt ca 750, the roof timbers have been carbon dated to 1170, and the Great Nave was erected in 1220. The marks of the masters are still found on the pillars of the gothic arches.

In the chancel, a sepulchre tomb on the north side of the altar is a rare example of this liturgical feature. It was a major focus for mediaeval piety in Holy Week, but was defaced during the Reformation.

The font dates from ca 1400; the unusual fortified bell tower probably dates from the 15th century. The mediaeval remains include effigies, head-slabs, canopy tombs, and the Bennet chantry chapel that later became the Boyle Chapel.

Saint Mary’s became a Collegiate Church in 1464 with the foundation of a college that included a Warden and Clerks, or priests, with eight fellows and eight singing men. 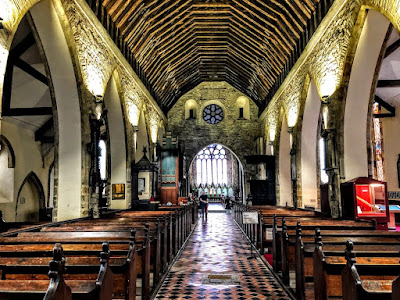 Inside Saint Mary’s Collegiate Church, Youghal … the timbers of the roof have been carbon dated to 1170 (Photograph: Patrick Comerford, 2021)

After the Desmond rebellion, Sir Walter Raleigh was granted vast tracts of land in Lismore and Youghal. They were later bought by Richard Boyle (1566-1643), 1st Earl of Cork. Boyle rebuilt the church in 1608, and erected a marble monument for himself and his family in the Boyle Chapel.

The Boyle monument shows a reclining Boyle between his first wife, Joan Apsley, and his second wife, Catherine Fenton, and their children below them, including Robert Boyle, who gives his name to ‘Boyle’s Law.’

Oliver Cromwell delivered a funeral oration from the top of a chest still in the church. A sword rest once held the ceremonial sword of the Mayors of Youghal. The pulpit dates from the 1730s.

Large-scale restoration in 1851-1854 included rebuilding the chancel. The stonework in the great East Window, dating from the 1460s, was restored, and the glass depicts the coats-of-arms of many leading families associated with the church.

A Chapel of Remembrance in the North Transept was created in the late 1980s, with furnishings from the closed church in Templemichael.

Saint Mary’s is now a National Monument under the care of the government, and is leased by Representative Church Body to the local council. 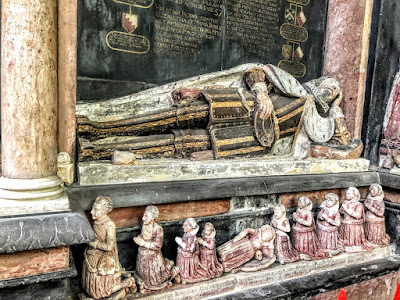 Youghal and the first
Jewish Mayor in Ireland

During my visit I was reminded that Youghal is the first town in either Ireland or Britain to have a Jewish mayor. William Annyas or William Moses Annyas Eanes (Ben Yohanan) was elected Mayor of Youghal in 1555.

His grandfather, Gil Anes, was a Marrano Jew or converso who had emigrated from Belmonte in Portugal. Belmonte was the birthplace of Pedro Álvares Cabral, the Portuguese navigator who discovered the land of Vera Cruz, now known as Brazil.

Many of the first Jews to come to Ireland were Marrano merchants from Spain and Portugal, who arrived as religious refugees fleeing the persecutions of Inquisition.

The surname of William Annyas is sometimes written as Ãnes and anglicised to Ames. It has been suggested that in some cases the family may have used the surname Ennis. His daughter married Yacov Kassin, son of Yehuda Kassin (Juan Cassin), a Marrano merchant who had moved to Galway.

Later, in the late 16th century, Francis Annyas was a three-time Mayor of Youghal in 1569, 1576 and again in 1581. He commanded the English garrison in Youghal during the Desmond Rebellions and had a colourful life working as a spy for Sir Francis Drake in the Azores. However, his exact kinship or family ties with William Annyas are not known. 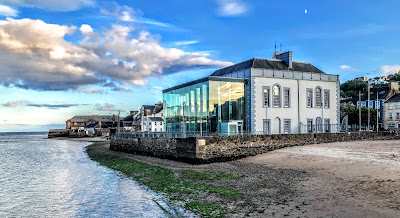 There never seems to have been being a synagogue in Youghal. The first Sephardic synagogue in Cork City may date from the later arrivals of merchants and families from Portugal and Spain in the late 17th and early 18th centuries.

The site of the Sephardic cemetery in Cork was discovered in the last century in Kemp Street, on the south-east corner of White Street, to the rear of the Cork Hebrew Congregation’s synagogue in South Terrace, which closed in 2016. However, no traces of a Sephardic synagogue have been found in the city.

As for Belmonte, it is, perhaps, the Portuguese town with the strongest Jewish presence. Hebrew culture and tradition have survived there continuously from the early 16th century until today, keeping their existence secret from their neighbours in the centuries after the Inquisition.

The Jewish community in Belmonte dates from the Middle Ages and the town’s first synagogue may have been founded in 1297. King Manuel issued an edict in 1496 expelling all Jews from Portugal, but a group of Crypto-Jews remained in Belmonte and they were the immediate, direct ancestors of the community that has survived until today.

They were a closed community, where the women preserved their Jewish traditions, keeping them alive in their isolation and handing them down through the generations for 500 years. The post-Inquisition Jewish presence in Belmonte was first documented in 1917 by Samuel Schwarz, a Jewish engineer from Poland. He was working at a nearby tin mine when he noticed the secretive habits of many families in the town. 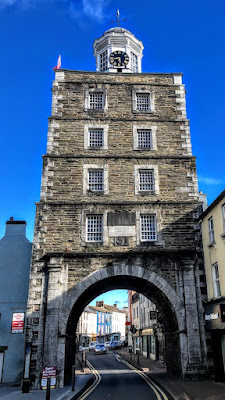 Myrtle Grove and
the first potatoes

The streets around Saint Mary’s Church have been renamed the ‘Raleigh Quarter’ and Youghal is attracting a new generation of tourists. Myrtle Grove, the Tudor house beside Saint Mary’s Collegiate Church, was once the home of Sir Walter Raleigh, and was also the home of the writer and journalist Claud Cockburn.

Myrtle Grove is said to stand on the site of the house of the Wardens of Youghal. With its tall chimneys, oriel windows and many gables, it is a rare Irish example of an unfortified, late mediaeval Tudor style stone house. It is said to have been built by Sir Walter Raleigh, and there are many legends associated with his time in the house.

One legend says a panicked servant at Myrtle Grove dowsed Raleigh in water while he was smoking the first tobacco in Ireland. Another says Raleigh brought the first potatoes from Virginia to Ireland in 1585 and planted them at Myrtle Grove.

For the following two years, Raleigh was mayor of Youghal, where Queen Elizabeth I granted him 170 sq km (42,000 acres) of land. At Myrtle Grove, he entertained the poet Edmund Spenser, who is said to have been inspired to write the last verse of the ‘Faerie Queene’ while looking out the window of Myrtle Grove.

However, many of the legends about his days in Youghal may be romantic myths created in the 1850s by Samuel Hayman, whose family acquired Myrtle Grove in the previous century. 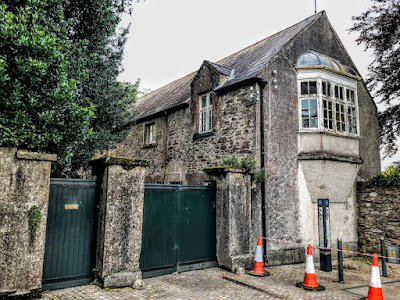 In the early 20th century, Myrtle Grove was the home of Sir Henry Arthur Blake (1840-1918), who had been Governor of the Bahamas, Newfoundland, Jamaica, Hong Kong and Ceylon (Sri Lanka). He was born in Limerick and died at Myrtle Grove in 1918.

Blake’s daughter, Olive, and her husband, Major John Bernard Arbuthnot, moved into Myrtle Grove with their family in 1916. Their youngest child was the writer and artist Patricia Evangeline Anne Cockburn (1914-1989). When her parents moved to London in 1918, Patricia was left at Myrtle Grove with her widowed grandmother.

For many years, Claud Cockburn was a columnist with The Irish Times while I worked there, and some of his sons, including Patrick Cockburn, also contributed to The Irish Times. Patrick’s godmother, Lady Clodagh Anson, once lived at the Towers in Ballysaggartmore, an exotic Gothic folly near Lismore, Co Waterford.

Patricia and Claud Cockburn moved to Ardmore, Co Waterford, in 1980. Claud died in 1980, Patricia died in 1989, and they are buried in Saint Mary’s Churchyard, close to the gates of Myrtle Grove.

Myrtle Grove remains in private ownership and is closed to the public, but it is being renovated and restored. 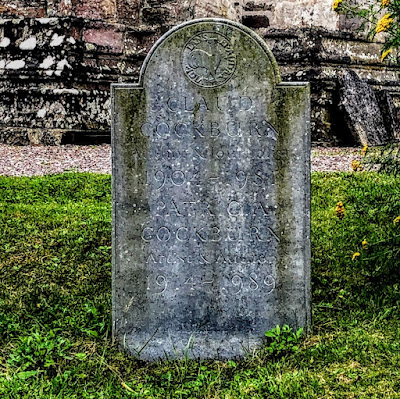 The grave of Patricia and Claud Cockburn in the churchyard of Saint Mary’s Collegiate Church (Photograph: Patrick Comerford, 2021) 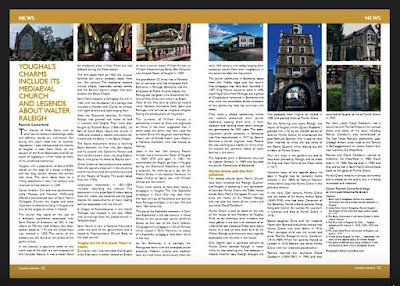 A two-page feature on Youghal, Co Cork, in the October 2021 edition of the ‘Church Review’