Learning more about the life
of Denis Comerford, signalman
in Winslow station for 30 years 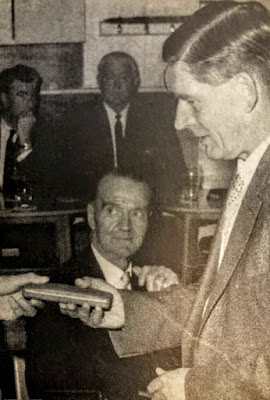 Some months ago, on a recent visit to the Buckinghamshire village of Winslow, just half an hour from Stony Stratford, half way between Stony Stratford and Aylesbury, I came visited Comerford Way, off Station Road.

At one time, I thought this modern housing development took its name from an area known as Great Comerford. But, during that visit to Winslow in September, I learned that Comerford Way takes its name from Denis A Comerford, who lived at No 11 Station Road and who was the last railway signalman at Winslow Station.

Denis A Comerford worked at Winslow station from 1937 until 1968, when the railway line and the station closed and he was made redundant.

During those years, Denis Comerford lived at No 11 Station Road. Station Road was known as Railway Station Road until 1864. The road existed in 1838, although most of the houses on the north side were built in the mid-1800s.

No 63 Station Road was once the Station Inn, and Station Road became the second most populated street in Winslow.

Comerford Way, which keeps alive the memory of Denis Comerford, is a new housing development at the east end of Station Road in Winslow, at the junction with McLernon Way.

However, I am only beginning to learn a little more about Denis Comerford and his life in Winslow, and have found some glimpses of his life in Robert Cook’s local history, The Book of Winslow (Buckingham: Barracuda Books, 1989). 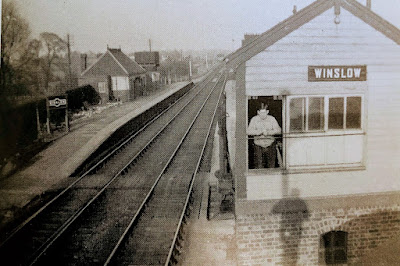 The original station (1850-1968) in Winslow was on the historical Varsity Line between Cambridge and Oxford or Banbury Merton Street, where it was an important stop before the routes diverged.

Thomas Brassey employed 2,000 navvies in 1847 to build the Bletchley to Banbury railway line. He also set aside £200 for their religious education.

Winslow Station was opened by the Buckinghamshire Railway on 1 May 1850 as part of this line from Banbury to Bletchley. The line was later extended westwards to Islip, to a temporary station at Banbury Road and then to Oxford, opening throughout on 20 May 1851. There were four trains each way daily.

The London and North Western Railway (LNWR) absorbed the Buckinghamshire Railway in 1879.

Winslow Station was conveniently situated at the end of Station Road which branches off from the High Street, serving the village of Winslow, which then had 1,805 inhabitants. The coming of the railway had a significant impact on the village, resulting in its northward extension and the opening of a ‘Railway Inn.’

Denis Comerford came to Winslow from Derby in 1937. His father was a railway guard and advised Denis that the railways offered security in hungry times.

Denis later recalled: ‘One of my first jobs was checking Claycross tunnel, Stephenson’s masterpiece near Chesterfield. It were dark, damp and smelt of sooty old steam engines. Winslow were a step up. Mr Brudenell was in charge of the station. He was a solid looking man, always immaculate with his white collar winged and starched. It was his rule to be on the platform to meet every train. An’ he had a remarkable head for figures. He looked after neighbouring Swanbourne as well.

In 1936, the year before Denis arrived in Winslow, the Aylesbury-Buckingham railway closed to passengers.

World War II brought new demands for the railways, but improved aircraft also put Winslow directly in the firing line as bombers passed over to prime targets like Coventry. The High Street and Sheep Street in Winslow trembled under the weight of tanks as they practised manoeuvres in and around town, and troops from all corners of the Empire, and eventually the US, filled local pubs to bursting.

No 63 Station Road, Winslow, was once the Station Inn (Photograph: Patrick Comerford, 2022)

The Station Inn, near Denis Comerford’s home and his place of work, did a roaring trade. Heavily defended by gun emplacements, it was the pub where most servicemen stopped off as they came and went by train.

As a signalman, Denis Comerford recalled many hijinks among the young men as they waited on his station platforms. He once recalled an occasion when two Canadians were amorously pursuing a local young woman and took a short cut towards her through the couplings of a train that was slowly departing.

‘They missed death by a fraction,’ Denis later remarked, according to Robert Cook’s account.

Denis Comerford continued to work at Winslow station for more than three decades after the end of World War II. However, the station declined after World War II, and in 1963 Winslow station was listed for closure in the Beeching report, which called for the closure of all minor stations on the line.

Winslow closed to goods traffic on 22 May 1967 and to passengers on 1 January 1968; the signal box followed one month later. The closure was delayed because replacement bus services were not able to handle the projected extra traffic.

Denis Comerford received his redundancy notice from British Railways in February 1968, when passenger train services from the Oxford/Bletchley and Bedford/Cambridge Lines were withdrawn. He left the service on 10 February 1968.

The letter setting out the terms of his redundancy included expressions of ‘appreciation of your many years of faithful service.’

The line between Oxford and Bletchley was closed to passengers and local goods services, and later singled in 1985.

Winslow station continued to be used during the 1980s for ‘Chiltern Shopper’ specials and British Rail handbills survive that show services calling at the station during November and December between 1984 and 1986.

The station building, by then in a very derelict state, survived long enough to see the first visit of a Class 43 on 13 February 1993, but was demolished shortly afterwards.

Now, a new station is planned for Winslow as part of the East-West Rail project to re-establish the route between Oxford and Cambridge.

A site for the new station has been bought at the junction of Buckingham Road with Horwood Road. Buckinghamshire County Council acquired the new site for £900,000, according to reports in 2016. Groundworks began in Summer 2021, and the construction of the station is due to be completed in summer 2023.

When the line opens, Winslow should have direct trains to Oxford, Milton Keynes Central and Bedford. The journey time from Winslow to Oxford is estimated at 27 minutes.

Meanwhile, the Station Inn has been closed for many decades, and is now No 63 Station Road, Winslow.

Comerford Way off Station Road, Winslow, close to the site of Winslow Station, keeps alive the memory of Denis Comerford. But I would still like to know more about his family, his family background, his early days in Derby and his life story.