A walk on the beach in Skerries at sunset,
enjoying ‘a grand stretch in the evening’ 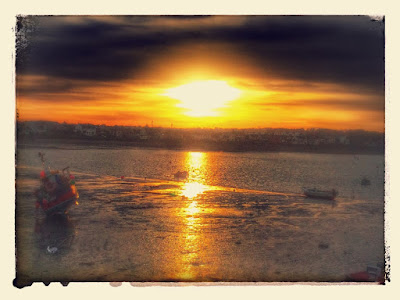 I went back to lectures on Friday and Saturday, and then had the privilege of presiding at the Eucharist in the chapel of the Church of Ireland Theological Institute this morning.

Today is the Third Sunday of Advent [11 December 2016], or Gaudete Sunday, and there is much to rejoice about and to celebrate on this day, at this time of the year.

A friend who lives in the Cathedral Close in Lichfield pointed out on Facebook earlier in the day how this is a special day. He noted that on 11 December the sun sets at its earliest time. From tomorrow [Monday] it slowly starts to set later.

However, the sun rises later until 31 December. Therefore the shortest daylight day is 21 December, halfway between today and 31 December. By Christmas Day, the sun will be setting about five minutes later than it set today.

As it is said in Ireland, we shall soon be able to say: ‘Sure there’s a grand stretch in the days.’

I thought that this afternoon it would be good to take advantage of the clear skies, the crisp weather, and the soon-to-arrive stretch in the days.

Walking on the South Strand in Skerries late this afternoon (Photograph: Patrick Comerford, 2016; click on image for full-screen view)

It was six months since I had been in Skerries. How did I let that time slip by so quickly? And so, as the part-time students were heading home this afternoon, two of us went to Skerries for a long walk on the beaches and around the harbour.

The tide was out, and dusk was beginning to fall as we went for a long walk on the South Strand. From there, we climbed the steps to the Martello Tower and Red Island.

There is now a public park and open space on Red Island that gives panoramic views south to the long stretch of the South Strand, south and east to the islands off Skerries, and north to the Mountains of Mourne.

But in the 1940s and the 1950s, the Quinn family built a holiday camp on the island, which is connected to the rest of Skerries by a narrow isthmus at the harbour.

Red Island was typical of holiday camps at that time, with 250 rooms housing about 500 guests a week. At its peak in the 1950s and 1960s, it employed over 110 people. Although I went to school nearby in Gormanston, and my grandmother was from Portrane, we never had a holiday there as a family.

I believe most of the guests came from the North of England. with smaller numbers from Northern Ireland and the Republic of Ireland. From the late 1960s, the camp went into decline because of the rise in popularity of package holidays on the Spanish Costas, and the beginning of the ‘Troubles’ in Northern Ireland. There was a substantial drop-off in visitors from the UK, and the same phenomena hit other places such as Butlins in Mosney.

Red Island closed in the late 1970s and was demolished a few years after. Today, most of the site is a public park.

At the harbour in Skerries this afternoon (Photograph: Patrick Comerford, 2016; click on image for full-screen view)

From there we walked around the harbour. There was a long queue outside ‘Storm in a Teacup,’ and so we did not stop there this afternoon. But it is good to see the business has recovered from a recent nasty episode.

As the sun set behind the harbour, we returned to centre of Skerries, and had a late lunch in Olive. And yes, they still serve the best double espresso in Fingal there.

I crossed the street to Gerry’s, one of my favourite shops for buying wine, and picked up this weekend’s Economost, the latest edition of Private Eye, along with two bottles of .

Back outside, the moon was bright and almost full, glistening across the clam waters. I had to go for another walk on the beach in the moonlight.

Soon, there’ll be a grand stretch in the evenings, and there will always be time for more walks on the beach. 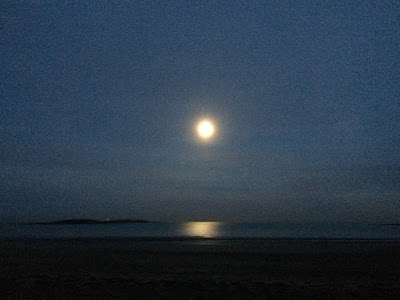 Moonlight on the South Beach in Skerries this evening (Photograph: Patrick Comerford, 2016)

Posted by Patrick Comerford at 20:56