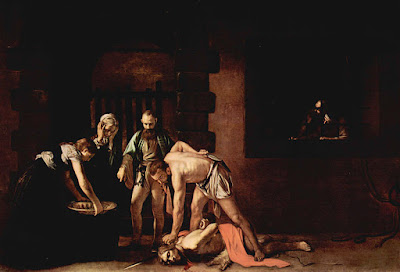 Today is the Third Sunday of Advent or Gaudete Sunday [11 December 2016], and later this morning [11.30 a.m.] I am presiding at the Community Eucharist in the Chapel of the Church of Ireland Theological Institute, and David McComb, an MTh student, is preaching.

This image of Carravagio’s ‘The Beheading of Saint John the Baptist’ (1608) and these notes are included in this morning’s chapel booklet:

A note on this morning’s Eucharist and hymns:

This morning is the Third Sunday of Advent, also known as Gaudete Sunday. On this Sunday we remember Saint John the Baptist and rejoice in his anticipation of the coming of Christ. On the Advent wreath, the rose-coloured or pink candle is lit alongside the two violet or blue candles, which represent the first two Sundays of Advent, symbolising the Patriarchs and the Prophets. The readings emphasise the joyous anticipation of the Lord’s coming, yet in our anticipation we sing no Gloria in Advent, waiting instead for the angelic Gloria that is to announce Christ’s birth.

Offertory: ‘Of the Father’s heart begotten’ (Church Hymnal, 175) is the oldest hymn in the Church Hymnal. It was written by Marcus Aurelius Clemens Prudentius (ca 343-413), a judge in the Roman imperial court, as a challenge to Arianism. It was translated by John Mason Neale and the Revd Sir Henry Williams Baker (1821-1877). The tune is a later form of a plainsong melody in Piae Cantiones (1582), and was arranged as the tune Corde natus (Divinium mysterium) by Sir David Wilcocks of King’s College, Cambridge.