Philippine bishop languishes
in jail for over two months 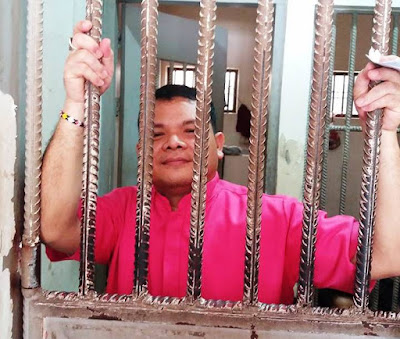 Bishop Carlo Morales has been in jail for over two months

During today’s sessions of the annual conference of USPG, Rachel Parry told the harrowing story of Bishop Carlo Morales who is being detained illegally in the Philippines for almost two months now.

Bishop Carlo Morales is the Bishop of Ozamis in the Iglesia Filipina Independiente (IFI), also known as the Aglipayan Church and the Philippine Independent Church, and is in communion with the Anglican Communion.

The conference of USPG (United Society Partners in the Gospel) is taking place at the High Leigh Conference Centre near Hoddesdon in rural Hertfordshire.

On 11 May, he was illegally arrested and detained and now faces fabricated charges.

Bishop Carlo is a peace advocate and a member of Pilgrims for Peace, the Philippine Peace Platforms and the Ecumenical Bishops’ Forum, which have been steadfast in their demands for the Philippine government and the NDFP (National Democratic Front of the Philippines) to resume peace talks that began in 1994.

Support for the peace talks is part of the Church’s prophetic peace-building ministry. Bishop Carlo was travelling with his wife, Maria Teofilina, and their driver, Isadome Dalid, to Ozamiz, on 11 May 2017, when they were flagged down by Rommel Salinas, a consultant for the NDFP, who asked for a lift. As a consultant involved in the peace process, Salinas carries a card that guarantees legal safety, including unhindered passage and immunity from search, arrest and detention.

However, as the bishop’s car approached Gango in Ozamiz City, they were stopped at a military checkpoint. Salinas was arrested, despite the guarantees of immunity. Bishop Carlo, his wife and the driver were told they were free to go, but Bishop Carlo decided to stay with Salinas.

When they arrived at a police station, all three were handcuffed and told they were accomplices to a high-value target and that they were harbouring a criminal. Their bags were confiscated, and the police claimed they had found a weapon in one bag.

The police refused to allow the bishop to have a private conversation with his lawyer, and he was told that he was going to be charged with the illegal possession of explosives that had been found in his car. Since then, the legal process has been delayed and prolonged.

The IFI has been subject to political persecution and threats ever since it was founded in 1902. Its origins are similar to the Old Catholic churches in Europe and the Reformed Episcopal Churches in Spain and Portugal.

The Obispo Maximo (Archbishop or Primate) of the IFI, Alberto Ramento, was brutally killed on 3 October 2006. The church believes he was murdered in order to silence him for his life-long stand for justice in the Philippines. His killers have never been charged or tried. But today, the IFI has 6 to 8 million members and is the second largest church in the Philippines.

Canon Grace Kaiso, General Secretary if the Council of Anglican Churches in Africa, spoke at the conference this evening of his work with the 40 million Anglicans in Africa, and the variety of this work.

He spoke of how some Anglican provinces in Africa cover only one country, while others cover several countries, including the Provinces in West Africa, Central Africa and Southern Africa.

He asked us to consider whether there are ways in which our partnerships with communities may have contributed to unsustaintable livelihoods, and asked how the ‘midwife’ approach can be of mutual benefit to USPG and its partners.

After the Morning Eucharist celebrated by Canon Joabe Cavalcanti, a USPG trustee, the conference continues tomorrow with Bibles studies, workshops and a meeting of the council of USPG.

Posted by Patrick Comerford at 20:28