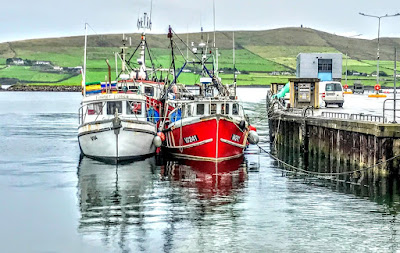 Dingle is the largest Gaeltacht town in Ireland and it depends almost entirely on tourism.

But is it Dingle?

Or is it Daingean?

And would we find Fungie the Dingle dolphin?

The Irish Government officially abolished the name of Dingle in 20015, decreeing it could no longer be used officially in government papers, on road signs and or on street names. The town was the be known officially and on signposts only as An Daingean. The name Dingle was taped over and removed from all road signs throughout Co Kerry.

Legislation was eventually introduced in in 2011 to recognise the mandate. Today the town’s traditional names, Dingle and Daingean, sit comfortably side-by-side in the one place.

The name Daingean or Daingean Uí Chúis is said to mean the Fortress of the Hussey family, recalling the Husseys, who were of Norman-Flemish origin and who lived in the Dingle area from the 13th century.

However, there is a second interpretation of the meaning of Daingean Uí Chúis. The Annals of the Four Masters, compiled by four Franciscan friars in 1632-1636, refer to a pre-Norman chieftain named O Cuis who ruled the area before the arrival of the Anglo-Normans. According to this version, he had his principle fortress in Dingle, and gave his name the name Daingean Uí Chúis.

Whatever the true meaning of the name, the earliest records show the two names of Dingle and Daingean Uí Chúis side-by-side from the mid-13th century. The story of the town dates back to its foundation by the FitzGerald and Rice families. They developed the town into the second largest port on the west coast of Ireland, second only to Galway.

Dingle prospered thanks to extensive trade with France and Spain, and by the 14th century importing wine was a major business. The 1st Earl of Desmond, who held Palatine powers in the area, imposed a tax on this activity around 1329.

Dingle was also a starting point for pilgrims on their way to Santiago de Compostella to begin the Camino and set off on the pilgrimage to the shrine of Saint James. It is said that the mediaeval church in Dingle, dedicated to Saint James, was built by the Spanish.

By the 16th century, Dingle was one of Ireland’s main trading ports, exporting fish and hides and importing wines from Continental Europe. French and Spanish fishing fleets used the town as a base. The connections with Spain were particularly strong. In 1529, the 11th Earl of Desmond and Gonzalo Fernandes, the Spanish Ambassador of the Emperor Charles V, signed the Treaty of Dingle.

Commerce and trade Dingle were enhanced in 1569, when an Act of Parliament was limited to 15 the number of ports in Ireland through which wines could be imported. The Act named Dingle among those towns and refers to it as ‘Dingle Husey, otherwise called Dingle I Couch.’ That year, the merchants of Dingle also applied for a ‘murage grant’ to build walls to enclose the town, but their application was not successful on that occasion.

In 1579, James FitzMaurice FitzGerald brought a small fleet of ships into Dingle and launched the Second Desmond Rebellion. But he was killed soon after in a minor skirmish with the forces of a cousin. The fleet left Dingle after three days, anchoring at Dún an Óir on the western end of the peninsula, leading eventually to the Siege of Smerwick in 1580.

Following the defeat of the Desmond Rebellion, Queen Elizabeth agreed in 1585 to a grant of a royal charter to Dingle, incorporating the town as a borough. This would allow building town walls, and traces of these town walls can still be seen, while the street layout preserves the pattern of burgage plots. The town was enclosed by a strong wall, with two gates in what is now Dykegate Lane, enclosing an area that included the present Main Street and parts of John Street and Goat Street.

Although Queen Elizabeth agreed to grant this charter to Dingle, the charter was only obtained in 1607. On 2 March 1607, King James I granted the charter, although the borough and the corporation were already in existence for 22 years.

The area of jurisdiction of the corporation was all the land and sea within two Irish miles of the parish church, and the borough had an admiralty jurisdiction over Dingle, Ventry, Smerwick and Ferriter’s Creek ‘as far as an arrow would fly.’

The charter also made Dingle a parliamentary borough, sending two MPs to the Irish House of Commons until the dissolution of the Irish Parliament at the Act of Union.

From the mid-17th century until the 1920s, the Dingle Peninsula was controlled by Lord Ventry and the Mullen or de Moleyns family, who lived on the Burnham Estate.

Dingle suffered greatly in the wars in 17th century, and the town was burnt or sacked on several occasions.

Dingle began to recover in the 18th century, due to the patronage of the FitzGerald family, Knights of Kerry. Robert FitzGerald (1717-1781) succeeded as the 17th Knight of Kerry in 1779. He was MP for Dingle from 1741 until he died. He imported flax seed and by 1755 a flourishing linen industry had been established, producing cloth worth £60,000 a year.

James Louis Rice, the son of Black Tom Rice, was a member of a family of prosperous wine traders and merchants with extensive links with France and Spain. Their ancestral home, the Rice House, stood on the corner of Goat Street and Green Street.

James Louis Rice was educated in Belgium and joined the Austrian army. He became an intimate friend of Emperor Joseph II of Austria, who made James Louis and his father Black Tom counts of the Holy Roman Empire.

Queen Marie Antoinette of France was a sister of Emperor Joseph II. When the French Revolution began in 1789, she, the king and their two children were gaoled in Paris. Rice and his circle formed a plan for her escape. They bribed some gaolers and prepared relays of horses to take Marie Antoinette to the coast. There, Count James Louis had one of his father’s wine ships waiting to take her to Dingle, where rooms at Rice House were ready for her.

At the last moment, however, Marie Antoinette hesitated and refused to abandon her husband the king and her children, and so she remained.

The flax and linen trade in Dingle collapsed with the successful industrial production of cotton in Great Britain, and was virtually extinct by 1837.

During the Great Famine in the 1840s, up to 5,000 people died in the Dingle Poorhouse alone, and they are buried in the paupers’ burial ground that overlooks the town. The town also fell victim to a cholera plague in 1849.

Meanwhile, the family of Lord Ventry sold Burnham House in the 1920. The house is now an Irish-speaking boarding school for girls known as Coláiste Íde. 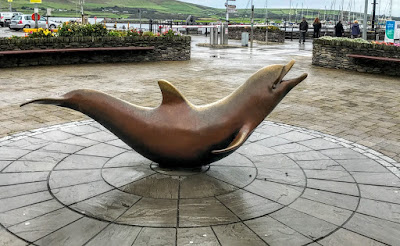 All we saw of Fungie last week was his statue in the harbour in Dingle, Co Kerry (Photograph: Patrick Comerford, 2017)

Today, with mountains at its back, Dingle faces into a sheltered harbour. Three main streets rise from the level ground at Strand Street at the edge of the harbour and at the Mall beside the Dingle River: Green Street, John Street and Main Street.

About 1,200 people live in Dingle, but the number of residents increases dramatically at the height of the tourist season.

However, we missed one of the main attractions, Fungie the Dolphin. Fungie is a full-grown, middle aged, male bottlenose dolphin. He weighs about a quarter tonne (500 lb) and is about four metres (13 ft). long.

During the summer months, Fungie is often seen taking fish in the harbour mouth. During the winter months, he travels further afield for food.

Paddy Ferriter, the Dingle Harbour lighthouse keeper, first began watching a lone wild dolphin escort the town’s fishing boats in and out of the harbour in 1984. By that August, the dolphin was officially a permanent resident of the entrance channel and self-appointed pilot of Dingle’s fishing fleet.

Over the years, the dolphin moved from being a timid but inquisitive observer of human life into a playful, mischievous, companion. Everyone receives playful attention, from swimmers and divers, to canoeists, windsurfers and day-trippers and children paddling on the beach.

Boats from Dingle Boat Tours and the Dingle Boatmen’s Association leave Dingle Pier at regular intervals throughout the day, every day, all year round, weather permitting, on a one-hour trip to see Fungie wild and free in his natural habitat.

The boats also offer trips from the harbour along the coast of the Dingle Peninsula and to the islands, including the Blasket Islands.

Our stop-off in Dingle was too short to go in search of Fungie. After lunch in John Benny’s Pub on Strand Street we went for a walk along the Mall and the narrow streets that date back to the Middle Ages and the days of a walled borough.

Even on a rainy day, as summer was turning to autumn, the narrow streets of Dingle were packed with tourists and visitors and colourful with their brightly-painted shop fronts.

Dingle’s streets are colourful, even of a grey, rain-soaked day (Photograph: Patrick Comerford, 2017)