Ballybunion Castle stands valiant
against the wind and the weather 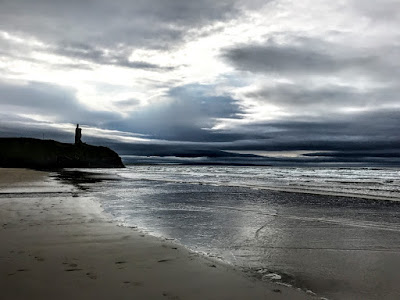 ‘No foes shall stay his might; though he with giants fight’ … Ballybunion Castle, Co Kerry, stands on a tall spit of land between the ‘Men’s Beach’ and the ‘Ladies’ Beach’ (Photograph: Patrick Comerford, 2017)

He who would valiant be ’gainst all disaster,
let him in constancy
follow the Master.
There’s no discouragement
shall make him once relent
his first avowed intent
to be a pilgrim.

Who so beset him round
with dismal stories,
do but themselves confound –
his strength the more is.
No foes shall stay his might;
though he with giants fight:
he will make good his right
to be a pilgrim.

Since, Lord, thou dost defend
us with thy Spirit,
we know we at the end
shall life inherit.
Then fancies flee away!
I’ll fear not what men say,
I’ll labour night and day
to be a pilgrim.

I thought of John Bunyan and his Pilgrim’s Progress as a group of us visited Ballybunion Castle last week. The castle, which once stood ‘valiant be ’gainst all disaster,’ but has since been ‘beset … round with dismal stories,’ takes its name from a Bunion or Bunyon family who also gave their name to the Kerry seaside resort.

Although I cannot trace any link between John Bunyan and the Bunion or Bunyon family of Ballybunion, the castle ruins standing on the cliffs above the sandy beaches are a reminder of dismal stories and those who fought like giants.

John Bunyan’s words were adapted by Percy Dearmer for this hymn so many of us remember at school assemblies, and set to the tune Monk’s Gate by the composer Ralph Vaughan Williams. But Bunyan’s original words were more mediaeval and redolent of stories associated with decaying fortresses such as this, with references to hobgoblins and foul fiends. 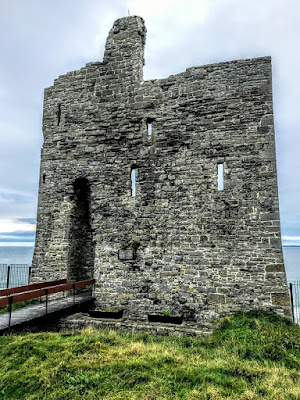 The ruins of Ballybunion Castle … the east wall is all that stands today (Photograph: Patrick Comerford, 2017)

The ruins of Ballybunion Castle belie a rich history going back centuries, and bear testament to the workers who built it and to the Bunyan family who gave the town its name. This is one of 15 cliff forts on the North Kerry coast.

Ballybunion Castle was built by the FitzMaurice family, a branch of the FitzGerald family of West Limerick, in the 14th century on the site of an old promontory coastal fort built by the Clann Conaire.

The Irish peerage title of Baron Kerry was created around 1223 for Thomas Fitzmaurice. In 1325, Maurice FitzMaurice, 4th Baron of Kerry, murdered Diarmaid Óg MacCarthy, son of Cormac Mór MacCarthy, in the court in Tralee. Maurice was tried and attainted by the parliament in Dublin and his lands forfeited, but after his death they were restored to his brother John FitzMaurice, 5th Baron of Kerry.

The present castle that now stands in ruins on this site was built with black coursed masonry and cut quern stones in the early 1500s for Edmond FitzMaurice, 10th Lord Kerry. The FitzMaurice family lived at Lixnaw and placed the Bonzon or Bunyan family in the castle as caretakers. The castle was destroyed by Lord Kerry in 1582, and in 1583 the lands of William Og Bunyan were confiscated because of his active role in the Desmond rebellion.

Thomas FitzMaurice (1574-1630), 18th Lord of Kerry and Lixnaw, eventually submitted to the authority of King James I in 1604, and he was confirmed in his possession of the castle and lands of Ballybunion in 1612.

The FitzMaurices continued to hold Ballybunion Castle until the mid-18th century. The last FitzMaurice to own the castle was probably Francis FitzMaurice (1740-1818), 3rd Earl of Kerry, whose extravagance led to the loss of all his Irish estates. Lady Kerry died in 1799, her husband died in 1818, and they were buried in the same tomb in Westminster Abbey. He had no children and the title became an additional title of the Marquesses of Lansdowne, descendants of his uncle John Petty, 1st Earl of Shelburne, who give there names to many streets and places in Dublin, Cork, Bristol and Calne.

When the FitzMaurice family sold their estates in Co Kerry, Ballybunion Castle was bought in Richard Hare in 1783.

The Hare family came to Ireland after the Cromwellian settlement and acquired property initially in Dublin and later in Cork. Their influence extended to Co Kerry at the end of the 18th century when Richard Hare bought 20,000 acres around Listowel. His son William Hare (1751-1837) later became first Baron Ennismore in 1800 and Earl of Listowel (1816).

The ownership of Ballbunion Castle passed from the Hare family to the local improvements committee in the 1900s. The castle has been a national monument since 1923, under the care of the Office of Public Works.

In the 1960s, the castle was sold to Kerry County Council which is responsible for maintaining the ruin. A souterrain leading from the south cliff face towards the castle was discovered in 1987, but because of a cave-in it stops before reaching the castle.

During the winter of 1998, the castle was struck by lighting and the upper part of the tower was destroyed. The 12-metre-high east wall is all that remains of the castle today. In 2014, the Office of Public Works carried out some remedial work to stabilise the castle wall and the foundations on one side of the castle.

A plaque on the castle’s east wall says ‘it stands as a memorial to the Bonyons, a proud and powerful family from whom today’s beautiful town of Ballybunion takes its name.’

The castle ruins stand on an elevated point above the cliffs which extend below in both directions. It overlooks the mouth of the Shannon, and has magnificent views of the beaches, the cliffs and the Atlantic Ocean; on clear days, there are views as far as Loop Head and Dingle. 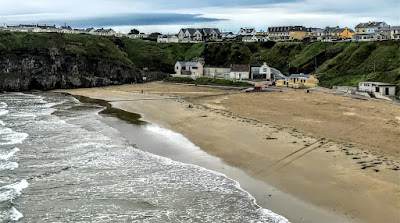 ‘The Ladies’ Beach’ seen from the ruins of Ballbunion Castle (Photograph: Patrick Comerford, 2017)

The beach on the south side of the castle is known as the ‘Men’s Beach’, while the one to the north is the ‘Ladies’ Beach.’ In the past, men would bathe on a separate beach from women and children, but this practice has not been observed for decades.

Meanwhile, ‘He who would valiant be,’ Percy Dearmer’s adaptation of John Bunyan’s words, remains John Bunyan’s only known hymn. The tune Monk’s Gate, arranged by Vaughan Williams, is named after a hamlet in West Sussex, on the A281, 4.3 km south-east of Horsham. It was there in December 1904 that Vaughan Williams first heard the tune when he heard Harriet Verrall of Monk’s Gate singing the English folksong ‘Our Captain Calls All Hands.’

Harriet and Peter Verrall, who lived at Thrift Cottage, were also responsible for teaching Vaughan Williams the ‘Sussex Carol’ (‘On Christmas Night all Christians sing’) and the tune known as ‘Sussex’ (‘Father, hear the prayer we offer’). Vaughan Williams’s tune was published in the first edition of the English Hymnal in 1906.

Bunyan’s original was not commonly sung in churches, perhaps because of the references to ‘hobgoblin’ and ‘foul fiend.’ Some recent hymnbooks have returned to Bunyan’s original, including the Church of England’s Common Praise and the Church of Scotland’s Hymns of Glory, Songs of Praise, and it has been popular with English folk rock artists such as Maddy Prior and the Carnival Band.

‘To Be a Pilgrim’ is the school hymn for many schools throughout England, and is sung in several school films. In Lindsay Anderson’s film if.... (1968), it characterises the traditional religious education in English public schools in the 1960s. It is also sung again in a public school context in Clockwise (1986), starring John Cleese, who directs all of the members of the Headmasters’ Conference to stand and sing the hymn, as he often would to his own pupils.

This was one of the hymns chosen by Margaret Thatcher for her funeral in 2013. But the hymn was also one of Tony Benn’s choices on BBC Radio 4’s Desert Island Discs.

The hymn’s refrain ‘to be a pilgrim’ has entered common usage in the English language and has been used in the title of many books about pilgrimage.

As I looked back on Ballybunion Castle last week, war-weary beaten by the winds, the waves, the weather and by lighting, I found myself humming once again John Bunyan’s or words:

one here will constant be,
come wind, come weather;
there’s no discouragement …