A Sunday morning at Kilnaughtin
and a landmark church in Tarbert 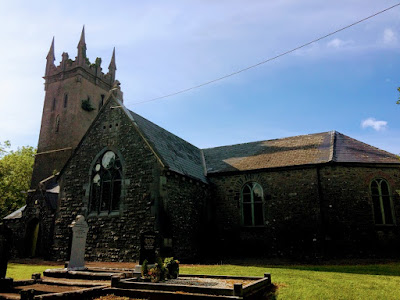 There are four churches in the Rathkeale Group of Parishes, which spreads across much of west Co Limerick and parts of north Co Kerry.

I am living in the Rectory in Askeaton, close to Saint Mary’s Church, and last Sunday I presided at the Eucharist in Kilcronan Church, at Castltown near Pallaskenry, and Holy Trinity Church, Rathkeale. This morning, for the first time, I presided and preached at the Eucharist in Saint Brendan’s Church, Kilnaughtin, on the edges of Tarbert, Co Kerry.

Tarbert is best known, probably, for the ferry that plies across the Shannon Estuary, between Tarbert and Killimer, near Kilrush in Co Clare. For the past two centuries, the elegant steeple of Saint Brendan’s Church, Kilnaughtin, has been a prominent feature of the landscape of Tarbert and its expansive bay. Like the Tarbert Lighthouse, which dates from 1834, the tower of Saint Brendan’s, with its pinnacles and rookery, represents home for many people from this part of North Kerry.

The parish of Kilnaughtin has ancient monastic origins that are associated with either Saint Neachtain and other Celtic saints or Saint Leachtain, who is said to have lived in the seventh century and to have been a disciple of Saint Finnen.

The list of rectors of the parish dates back to at least 1347, when a priest named Maurice FitzPeter was presented by the Crown on 4 September to the Church of Kylnathyn in Mynnour in the Diocese of Ardfert.

After that, however, there is a long gap in the records until 1418, when we come across Donald O’Kynnelyoe, when he is appointed Rector of Killreachtayn. The parish seems to have been vacant for a long time, and it is noted that Killreachtayn is commonly called the Church of Dunchacha and Dryseach and Tearmundscanayn. There were objections to his appointment too, and he needed a dispensation in those pre-Reformation days because he was the son of a priest.

As the FitzGeralds, Earls of Desmond, extended their power in this area, Dermot O’Connor, Lord of Tarbert and kinsman of John O’Connor Kerry of Carrigafoyle Castle, forfeited his lands in Tarbert to James FitzGerald, 6th Earl of Desmond, the ‘Usurper’ Earl, in 1450. Within a decade, the Earl of Desmond built a castle or tower house in Tarbert, probably located on the north side of the present-day Square.

The O’Connors kept their interests in the area, Lislaughtin Abbey is said to have been founded by John O’Connor Kerry in 1464, or perhaps even as late as 1478, between Tarbert and Ballylongford, for the Franciscan Friars of the Strict Observance, who became involved at the same time with the Franciscan Abbey in Askeaton.

It was, perhaps, the most elegant Hiberno-Gothic foundation in the Shannon region and it was such an important Franciscan centre that the Irish Province of the Franciscan Observatine Order held their chapter meeting there in 1507.

When Elizabethan forces attacked Lislaughtin Friary in 1580, three elderly friars failed to make their escape, and Danial Hanrahan, Philip O’Shea and Maurice Scanlon, were killed as they knelt in front of the high altar.

Following the Desmond Rebellion, the Franciscans were ejected from Lislaughtin in 1585. Meanwhile, and for almost 200 years the 15th century church at Kilnaughtin served as the Church of Ireland parish church, with some occasional interruptions. In 1587, following the defeat of the Earl of Desmond, the Manor and Castle of Tarbert and adjoining lands were granted to Sir William Herbert (1554-1593), a Welsh colonist, religious writer and politician.

Herbert became an ‘undertaker’ for the plantation of Munster in 1586, and he applied for three ‘seignories’ in Kerry. In 1587, he was allotted many of the lands confiscated confiscated the Earl of Desmond. This included Castleisland and its neighbourhood, and covered 13,276 acres. He wished to see Kerry colonised by English settlers, he had the articles of the Creed, the Lord’s Prayer, and the Ten Commandments translated into Irish, and directed the clergy on his estate to read the services in Irish.

After nearly two years at Castleisland, he acted as vice-president of Munster. But his work was severely attacked by Sir Edward Denny, High Sheriff of Kerry, and owner of Tralee and the neighbourhood, who complained of Herbert's self-conceit, and who said his constables were rogues. Herbert finally returned to England in 1589, and died in 1593. His only daughter and heir, Mary, married her cousin, Edward Herbert (1583–1648), 1st Baron Herbert of Cherbury, when he was 15 and she was 21; his brother was the priest-poet George Herbert (1593-1633).

The Herbert family lost its estate in Tarbert soon after, and in 1607, the Lord Deputy, Sir Arthur Chichester, asked the Privy Council to grant Tarbert to Patrick Crosbie of Leix. The grant was made subject to families from the Seven Septs of Leix being settled there.

Meanwhile, the Franciscans had returned to Lislaughtin Abbey by 1629, but in the Cromwellian assaults, the monks who fled the abbey in 1652 were shorn of their ears by Cromwellian soldiers, giving the bloody location the name of Gleann Cluaiseach, or the Glen of the Ears.

A year later, the Crosbie family sold Tarbert to the Roche family of Limerick in 1653. The lands were eventually sold to Daniel O’Brien, Lord Clare, who held them until the Battle of the Boyne and the subsequent the Treaty of Limerick in 1690. As a Jacobite, he was obliged to flee to France, and in 1697 John Leslie, a supporter of King William III, was granted the confiscated Tarbert estate of Lord Clare.

The Leslie family began building Tarbert House in 1700, and John Leslie was the Church Bishop of Limerick, Ardfert and Aghadoe from 1755 to 1770. In 1775, Sir Edward Leslie laid out the village of Tarbert. Around this time, the first Palatine settler, Peter Fitzell moves from Rathkeale to Tarbert as a tenant farmer on the Sandes estate at Sallowglen.

But the new church was destroyed in a ‘violent hurricane’ in 1789, and an enlarged church was built on Steeple Road. The Vestry Minutes from Kilnaughtin for 1812 and later show that the present church, which has the date 1814 inscribed above the porch, is a rebuilding and extension of the existing church at Tieraclea.

Around the same time, Sir Edward Leslie established an Erasmus Smith School on the Glin Road in 1790. The school has 75 Roman Catholic pupils (56%) and 44 Protestant pupils (44%) on the roll book. When Sir Edward Leslie died at the age of 73 in Weymouth in 1818, the title of baronet he had received in 1787 died out and a considerable fortune of between £3,000 and £4,000 a year devolved on his first cousin, Robert Leslie of Leslie Lodge, Tieraclea.

Samuel Lewis in his Topographical Directory of Ireland in 1837 notes that the Rectory of Kilnaughtin was impropriate in Anthony Raymond, who was receiving two-thirds of the tithes, while the vicar received only one-third.

The church was remodelled again in the 1850s and 1860s under the influence of the Anglo-Catholic Oxford Movement, giving it the present unusual shape and structure. In 1867, the architects William John Welland (1832-1895) and William Gillespie (1818-1899) designed and laid out new pews for the T-plan church of 1814.

In 1876, the Kerry-born architect James Franklin Fuller (1835-1924) prepared plans for additions to the church. The work was in progress in November 1877, and the chancel was completed by September 1878. The contractor was a Mr Crosbie of Tralee.

Fuller’s alterations and additions realigned the church, so that the original east-west church became the transepts, while the chancel area or top of the church is now at the south end of the building. The Irish Ecclesiastical Gazette, the forerunner of the Church of Ireland Gazette, reported during this renovation: ‘A correspondent tells us that a very handsome stone cross, which was to have been placed on the new porch, has been thrown aside, the incumbent objecting to its erection.’

The inscriptions on the church plate include ‘Tarbert Church 1857’ and ‘Kilnaughtin Church 1866.’ The plaques in the church commemorate many prominent local families, including the Fitzell, Leslie and Sandes families, and one plaque was moved from the former Methodist Church in Tarbert into the church. 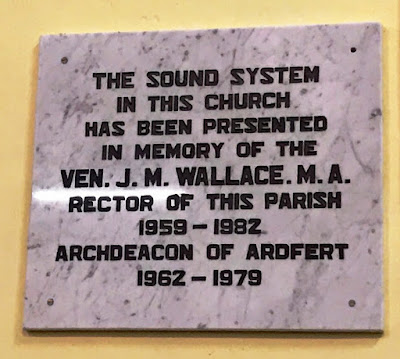 Archbishop Morris was a staunch, if not stubborn, defender of the Anglican Church in Wales. He stirred controversy when he described the Church in Wales as ‘the Catholic Church in this land’ and referred to Roman Catholic and Nonconformist clergy as being ‘strictly speaking, intruders’ whose rights to function in Wales could not be acknowledged.

He also campaigned against the retention of the word ‘Protestant’ in the Coronation Oath. Archbishop Geoffrey Fisher of Canterbury questioned whether such matters were really the business of a prelate who was ‘not a bishop of the Church of England.’ Later Fisher and Morris were later among the senior clergy who objected to the proposed Anglican-Methodist reunion in the late 1960s and early 1970s.

For all his claims to be a Tractarian, Morris did not always endear himself to his more Anglo-Catholic clergy in Wales. He prohibited extra-Eucharistic devotions such as Benediction in his diocese, and he insisted that permission be sought before the Sacrament was reserved in a tabernacle or aumbry for use in giving Holy Communion to the sick.

On the other hand, as Archbishop of Wales, he oversaw the preparation of a new Order for the Celebration of the Holy Eucharist for use in the Church in Wales. When this replaced the 1662 rite in 1966, he commended it unreservedly. He retired in 1967, and died four years later.

In 1959, the year Archbishop Morris was a visiting preacher in Saint Brendan’s, Kilnaughtin, was united with the Listowel Group, and the parish was united with the Tralee Group from 1982 to 1994. In 1994, it was transferred to the Rathkeale Group of Parishes, although it remains in the Diocese of Ardfert.

Further restoration works were carried out in 1988, when the church was given a new roof.

The parish took the date 1814 over the north porch as a good way to celebrate its bicentennial three years ago, and an ecumenical service of thanksgiving was held in Saint Brendan’s Church on 17 August 2014. The service was led by my immediate predecessor in the parish, the Revd Dr Keith Scott, and the music was led by the choir of Saint Mary’s Church and a local choir, Lyric Voices, led by Priscilla O’Donovan, a parishioner in Saint Brendan’s.

As part of these celebrations, the parish also published a well-researched and finely illustrated history, St Brendan’s Church of Ireland, Tarbert, 1814-2014. Two Hundred Years of Change. 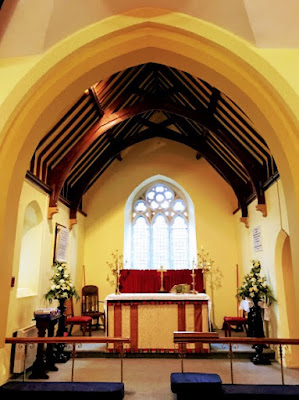 I'm a descendant i think of John O' Connor of Kerry who founded Lislaughtan Abbey for the Franciscans. it's interesting to hear it meentioned here. Your journal is very interesting and i hope to follow it. i visited Ireland for the first time in 2019 and saw the Carrigafoyle castle and was awed by the Ring of Kerry. Gwen Ginocchio Costa Mesa Ca