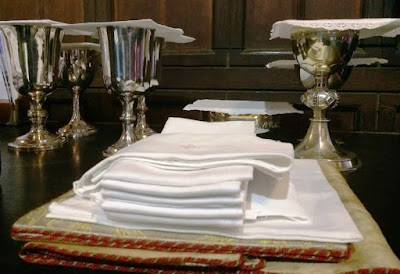 Communion vessels prepared for a celebratgion of the Eucharist (Photograph: Patrick Comerford)

At the Parish Eucharist in Castletown Church, Kilcornan, Co Limerick, and at Morning Prayer in Holy Trinity Church, Rathkeale, tomorrow morning [12 January 2020], after listening to Gospel account of the Baptism of Christ, we are going to renew our Baptismal promises or vows.

But as I prepare to preside at the Parish Eucharist tomorrow, I have found myself reflecting on the words we use in the Blessing of the Bread and Wine in the Eucharist, after reading a posting on Thursday morning on a Facebook group, ‘Episcopalians on Facebook’ by Dudley C McLean II.

In Saint Mark’s account of the feeding of the 5,000 (6: 34-44), we read: ‘Taking the five loaves and the two fish, he looked up to heaven, and blessed [he said the blessing] and broke the loaves, and gave them to his disciples to set before the people; and he divided the two fish among them all’ (Mark 6: 41-44, NRSVA).

Dudley C McLean II asks whether you have ever wondered what were the words of ‘the blessing’ said by Christ?

His curiosity is also stirred up when he reads the words of the institution of the Eucharist:

Saint Luke provides a more comprehensive report on the institution of the Eucharist. His account involves two cups of wine and the loaf of bread.

The first cup begins the opening ceremony of the Passover meal (see Luke 22: 17). Here Jesus would have prayed:

‘Blessed are You, Lord our God, King of the Universe, Creator of the fruit of the vine.’

The first prayer is called Kiddush (Hebrew: קידוש) – literally ‘sanctification’ – a blessing said over wine to sanctify the Shabbat, Passover and other Jewish holidays.

The word refers too to a small repast on Shabbat or festival mornings after the prayer services and before the meal.

The Torah refers to two requirements concerning Shabbat and in particular the Passover: to keep it and to remember it. The celebration of the Feast of Passover each year commemorates the liberation of the people from slavery:

‘When the Lord brings you into the land … you shall keep this observance in this month. It shall serve for you as a sign on your hand and as a reminder on your forehead, so that the teaching of the LORD may be on your lips; for with a strong hand the LORD brought you out of Egypt. You shall keep this ordinance at its proper time from year to year’ (see Exodus 13: 5, 9-10).

The function of the first cup is to set apart, sanctify or make holy the celebration.

Then follows the Hamotzi or blessing over bread: ‘Blessed are you, Lord our God, King of the Universe, who brings forth bread from the earth.’

The bread is then broken and shared among those who are present.

The second cup follows after the second Kiddush or blessing over the wine: ‘Blessed are you, O Lord our God, King of the universe, creator of the fruit of the vine.’

In the Liturgy of the Church, the Eucharistic prayer is the pinnacle of the celebration, a memorial proclamation of praise and thanksgiving for God’s work of salvation, making it present for us at this moment. It is a proclamation in which the Body and Blood of Christ are made present by the power of the Holy Spirit and the people are joined to Christ in offering his sacrifice to the Father.

At the Preface, the priest extends his or her hands and says: ‘Lift up your hearts.’ This functions in the same way as the first cup or Kiddush at the Passover rite. Its purpose or significance includes the intention of gathering, and the priest concludes the Preface with the people singing or saying aloud, ‘Holy, holy, holy Lord ...’

Blessed are you, Father,
the creator and sustainer of all things;
you made us in your own image,
male and female you created us;
even when we turned away from you,
you never ceased to care for us,
but in your love and mercy you freed us from the slavery of sin,
giving your only begotten Son to become man
and suffer death on the cross to redeem us;

he made there the one complete and all-sufficient sacrifice
for the sins of the whole world:

he instituted,
and in his holy Gospel commanded us to continue,
a perpetual memory of his precious death
until he comes again:

Then follows the Hamotzi:

What is missing are the actual words of the Hamotzi, ‘Blessed are you, O Lord our God, King of the Universe, who brings forth bread from the earth.’ Instead, we only see the priest raising the bread.

In the Kiddush of the second cup, we see similar actions and hear similar words:

In the same way, after supper he took the cup;
and when he had given thanks to you,
he gave it to them, saying …

Here again, the words of the Kiddush are missing, ‘Blessed are You, O Lord our God, King of the universe, creator of the fruit of the vine.’

At the time the Gospels were written, Jewish-born members of the Church would have known what was meant when they saw and heard ‘when he had given thanks to you,’ and understood these words as referring to prayers used at the Passover.

These words are implicit, and it was not necessary to spell them out.

The Gospel writes uses a literary deice known as incipit.

For example, Christ’s words on the cross, Eloi, Eloi, lema sabachthani, ‘My God, my God, why have you forsaken me?’ (see Mark 15: 34, Matthew 27: 46), refer not just to the first verse of Psalm 22, but by pronouncing the incipit Christ invokes the entire psalm.

Dudley C McLean II points out in his posting this week that 2,000 years of the Eucharist, the Church continues to omit the implicit and implied words used by Christ in his words of blessings over the Bread and the Cup before giving new meaning to them as his body and blood.’

Imagine, he suggests, if instead in the Eucharistic Liturgy we heard the priest say:

On the night he was betrayed he took bread,
(the priest raises the bread and says)
Blessed are you, O Lord our God,
King of the Universe,
who brings forth bread from the earth.’
He broke it and gave it to his disciples, saying:
‘Take, eat,
this is my body which is given for you.
Do this in remembrance of me.’

In the same way, after supper he took the cup;
(the priest then raises the cup and says)
‘Blessed are you, O Lord our God,
King of the Universe,
creator of the fruit of the vine.’
and when he had given thanks to you,
he gave it to them, saying …

Drink this, all of you,
for this is my blood of the new covenant
which is shed for you and for many
for the forgiveness of sins.
Do this, as often as you drink it,
in remembrance of me.

Of course, he points out, although the words of the prayers of blessings, the Hamotzi and Kiddush, are missing, thise does not invalidate the Eucharist. But their inclusion would have enriched the liturgy and strengthened the connections to ‘the night that he was betrayed.’ 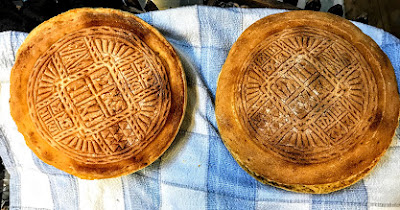