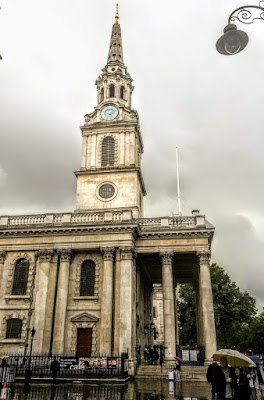 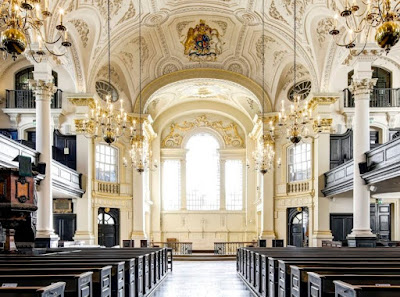 This morning (27 May 2021), my photographs are from the Church of Saint Martin-in-the-Fields, in the north-east corner of Trafalgar Square, close to the National Gallery and the National Portrait Gallery, London. This is a church I assoicate with Anglican pacifism, campaigning against apartheid and on behalf of the homeless, and with an Irish-born, cricket playing, USPG missionary.

This is a landmark church in London, known for its fine architecture and its prominent location. The church has a long tradition, but is also innovative in response to changing needs, from London’s first free lending library to the first religious broadcast.

There has been a church on the site since Norman times. In 1222, a dispute was recorded between William, Abbot of Westminster, and Eustace, Bishop of London on the bishop’s authority over the church, then surrounded by fields. The Archbishop of Canterbury decided in favour of the abbot and the monks of Westminster Abbey.

Henry VIII built a new church on the site ca 1542 and extended the parish boundaries to keep plague victims away from his palace. The church was enlarged in 1607 at the cost of Prince Henry, son of King James I.

This church was replaced by the present church in 1721. The church was designed by James Gibbs and completed in 1726. Gibbs’s design has been imitated across North America and throughout the world. While John Nash was planning Trafalgar Square in the 19th century, he created Church Path and the range of buildings to the north.

The work of the church today is informed by the practical Christianity exemplified in the life of its patron, Saint Martin of Tours, known for his spontaneous generosity, typified in sharing his cloak with a beggar.

Canon Dick Sheppard, Vicar of Saint Martin’s during World War I, gave refuge to soldiers on their way to France. He saw Saint Martin’s as ‘the church of the ever-open door,’ and the doors of the church have remained open ever since. Dick Shepherd, a life-long pacifist, was also a founder of the Peace Pledge Union and the Anglican Pacifist Fellowship in the 1930s.

When Dick Shepherd became Dean of Canterbury, he was succeeded by Canon (William) Patrick ‘Pat’ Glyn McCormick (1877-1940), an SPG (USPG) missionary in the Transvaal in 1903-1910. His father, Canon Joseph McCormick (1834-1914), played Cricket for Ireland under the alias of Joseph Bingley to disguise his participation from his parishioners in Dunmore East, Co Waterford. Joseph McCormick also rowed in the Cambridge Boat in March 1856, helping to defeat Oxford in 22 minutes 45 seconds.

Pat McCormick played cricket for Devon and had one first class match for MCC in 1907, and also played Rugby for Transvaal. When he succeeded Dick Shepherd at Saint Martin-in-the-Fields in 1927-1940, he continued his work among the ‘down and outs.’ His brother, Joseph Gough McCormick (1874-1924), became Dean of Manchester, and also played cricket with distinction for Norfolk 1899 to 1909, scoring four hundreds.

Saint Martin’s work with homeless people led to the foundation of the Social Service Unit in 1948. The work continues today through ‘The Connection at Saint Martin’s,’ which cares for around 7,500 people each year.

In the 1960s, Saint Martin’s was concerned for the welfare of new arrivals in the emerging Chinatown and welcomed a Chinese congregation.

Throughout the 20th century, Saint Martin’s also played an active role in wider social, humanitarian and international issues. The church and its priests were involved in the Anti-Apartheid Movement and the founding of many charitable organisations, including Amnesty International, Shelter and The Big Issue.

The Vicar’s Christmas Appeal on BBC Radio 4 has been broadcast annually since 1924, and now raises over £2 million a year for disadvantaged people.

The Academy of Saint Martin in the Fields is one of the world’s foremost chamber ensembles.

The Revd Dr Sam Wells has been Vicar of Saint Martin-in-the-Fields since 2012. He is a former Dean of Duke University Chapel in Durham, North Carolina (2005-2012), Visiting Professor of Christian Ethics at King’s College, London, and a regular contributor to ‘Thought for the Day’ on BBC Radio 4. His wife, the Right Revd Jo Wells, is Bishop of Dorking.

A monument beside the church that constantly attracts my attention is the Edith Cavell Memorial in Saint Martin’s Place.

Edith Cavell (1865-1915) was a nurse from Norfolk and was matron at Berkendael Medical Institute in Brussels when World War I broke out in 1914. She nursed soldiers from both sides without distinction and helped 200 Allied soldiers escape from German-occupied Belgium. She was arrested in August 1915, court-martialled, found guilty of treason, and shot at dawn by a German firing squad on 12 October 1915.

At first she was buried in Belgium, but she was brought back to Britain in May 1919 for a state funeral in Westminster Abbey and was buried at Norwich Cathedral.

The sculptor Sir George James Frampton (1860-1928) declined any fee for the commission. He adopted a distinctively Modernist style for the memorial, with a three-metre statue of Edith Cavell in her nurse’s uniform, sculpted from white Carrara marble, standing on a grey Cornish granite pedestal. The statue stands in front of the south side of a larger grey granite pylon that is 12 metres high. The top of the block is carved into a cross and a statue of a mother and child, sometimes interpreted as the Virgin and Child. The whole memorial is elevated on three steps.

The inscription on the pedestal reads:

The memorial was unveiled on 17 March 1920. The site was chosen because it is beside the first headquarters of the British Red Cross at 7 Saint Martin’s Place. 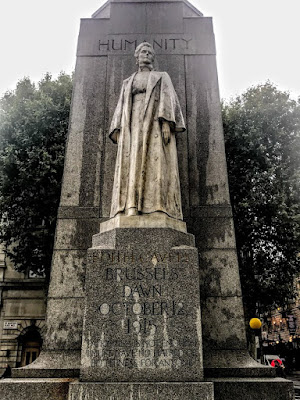 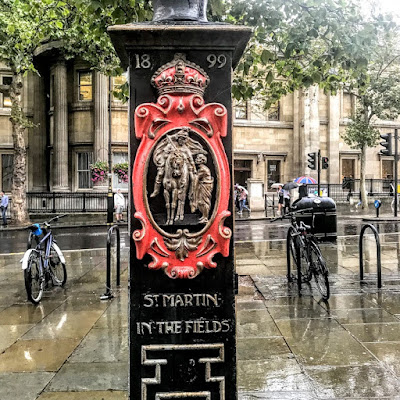 A lamppost outside Saint Martin-in-the Fields recalls the story of Saint Martin of Tours sharing his cloak with a beggar (Photograph: Patrick Comerford)

The Prayer in the USPG Prayer Diary today (27 May 2021, Saint Augustine of Canterbury) invites us to pray:

May we acknowledge racism in all its forms and work together to strive for equality and diversity in all we do. 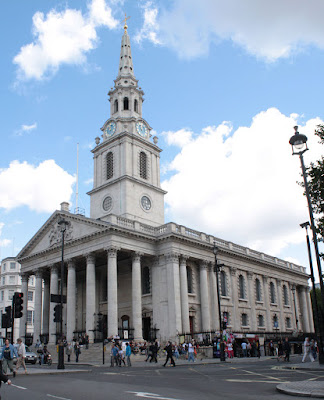