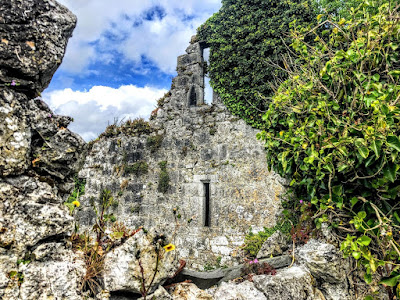 The ruins of the former church in Askeaton, destroyed by fire in 1847 (Photograph: Patrick Comerford, 2021)

Askeaton is bookended by two churches named Saint Mary’s, the Roman Catholic and Church of Ireland parish churches. It is as though the town is held or enclosed by two hands joined in prayer.

But Askeaton had other churches in the past too. The most notable among these is the Franciscan Friary, whose dramatic ruins stand on the east bank of the Deel, just north of the town. Historians agree too there was also a chapel or church within the walls of the Desmond castle in Askeaton.

Other churches within a short distance of Askeaton included the former churches at Lismakeery, Tomdeely, Morgans North or Mount Pleasant, and Beagh, near Ballysteen, served in pre-Reformation days probably by the Augustinian canons sent to Askeaton from Keynsham Abbey, and working like priests moving out from a minster.

In the 17th and early 18th century, the Catholics of Askeaton may have been served by Franciscan friars who remained around the ruined friary and living in the town. The list of parish priests of Askeaton dates back to 1704, and this list is complete from the end of the 18th century.

As the Penal Laws eased at the end of the 18th century or the beginning of the 19th century, a Catholic church was built close to the friary ruins, facing the mills and on the east bank of the Deel. 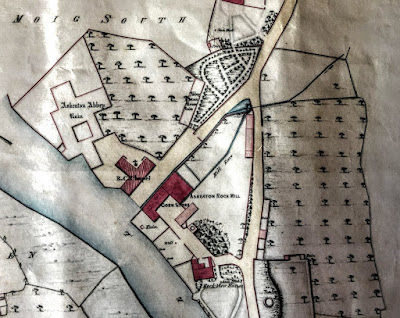 The 1842 map of Askeaton shows the church was a large building before the Famine (Photograph: Patrick Comerford, 2021)

A neighbour called around to the Rectory in recent days with a map of Askeaton dated 9 July 1842, showing that this church, although it was thatched, was a substantial building on the north edge of the town.

Russell was a merchant, shipowner and industrialist. He built the Newtown Pery Mills on Russell’s Quay, Limerick, and the Newtown Pery store nearby on Henry Street, and he was one of the founders of the Limerick Savings Bank. The Russells also acquired large landholdings in Limerick, Ballinacarriga, Kildimo, and Milltown, Askeaton.

Russell bought Paul Erson’s mill in Askeaton in the 1840s and expanded the business. But disaster struck on 10 March 1847 when fire broke out at the Russell Mills, now known as the Old Creamery. The fire killed a mill worker named Costello and several other workers were burned and injured.

A spark from the fire set ablaze the thatched roof of the church and the whole building perished in the ensuing conflagration. During the fire, the parish priest, Father Edward Cussen, put his life at risk as he worked rescuing several men from the blaze. 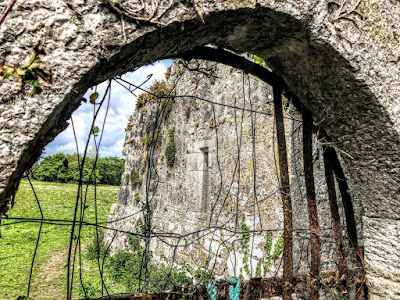 The thatch-roof church was destroyed by a fire that spread from the neighbouring mill (Photograph: Patrick Comerford, 2021)

Askeaton was without a Catholic church and Father Cussen was offered Corbett’s flour mill in Brewery Lane, later Fitzgibbon’s store. Mass was celebrated there for the next four years until the present Saint Mary’s Catholic Church was built in 1851-1853.

Between the burning of the old church in 1847 and the opening of the new one in 1851, Askeaton suffered through the Famine. A famine or fever hospital was set up to take care of the dying and the very ill. The ruins of the hospital can still be seen on the main bypass opposite the turn off to the Wyeth plant.

Before the Famine, this building was a treatment centre and a home for lepers. It seems that leprosy may have occurred in the area, as a stream near the four roads also refers to leprosy – Lochan Lobhar, or the Lepers’ Pond.

The population of Askeaton in 1841, four years before the Famine, was 1,862; 40 years later, the population in 1881 was 804, and today it is about 1,137, illustrating graphically how Askeaton has never fully recovered from the impact of the Famine.

Father Cussen died in 1860 and he is buried under the main aisle of the church he built. 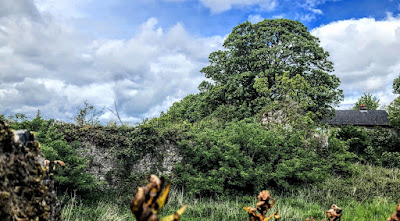 As for John Norris Russell, he died in 1853 and is buried at Saint John’s Church in Limerick, where the Russell mausoleum was erected 20 years later.

This is a fine classical mausoleum built of limestone in 1873, with a tetrastyle temple front in the Doric order, limestone ashlar walls with Doric pilasters supporting a plain entablature and pediment. The heraldic decorations include a cast-iron relief goat figure above ribbon band with the Russell motto and date: Che Sara Sara 1873.

The ruins of the church destroyed by fire in 1847 still stand beside the Friary ruins close to the east bank of the River Deel on the north edge of Askeaton. 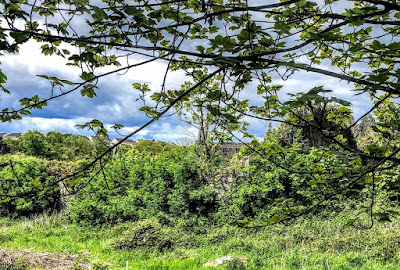 The ruins of the church destroyed by fire in 1847 stand by the Friary ruins (Photograph: Patrick Comerford, 2021)