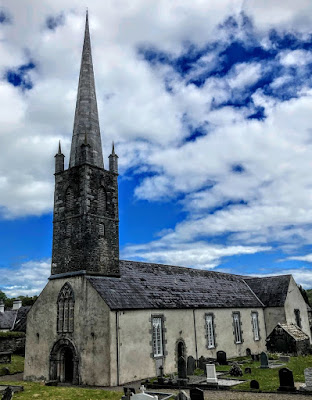 Saint Fachtna’s Cathedral in Rosscarbery, West Cork, is the most southerly cathedral in the Church of Ireland(Photograph: Patrick Comerford, 2021)

The Cathedral Church of Saint Fachtna in the beautiful West Cork town of Rosscarbery standing above a narrow bay and on a site where Christians have worshipped for over 1,400 years.

Ross Cathedral is the most southerly cathedral in the Church of Ireland, although, despite the claims on many websites, it is not the smallest. It the main landmark in Rosscarbery, and its spire can be seen at a distance in the surrounding countryside.

This is the cathedral of the Diocese of Ross, within the United Dioceses of Cork, Cloyne and Ross, the Dean of Ross is the Very Revd Chris Peters, and the cathedral group of parishes in West Cork also includes Kilmacabea (Leap), Myross (Union Hall), Kilfaughnabeg (Glandore) and Castleventry. 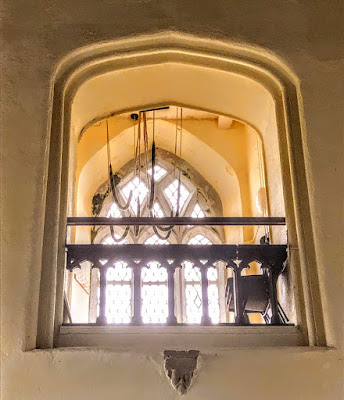 Saint Fachtna is said to have founded a monastic school in Ross in AD 590 (Photograph: Patrick Comerford, 2021)

The Irish name for Ross, Ross Ailithir, means the wooded headland of the pilgrims, and during this month’s recent road trip or ‘staycation’ in Co Kerry and West Cork, Dean Chris Peters offered this pilgrim a personal tour of the cathedral.

It is said Saint Fachtna, who had been the Abbot of Molana in Co Waterford, founded a monastic school there in AD 590, and that pilgrims and scholars came from near and far to the principal monastery of West Cork. Saint Fachtna died ca 600 at the age of 46, and is commemorated on 14 August.

Although the first cathedral on this site may have been built in the 12th century, Ross was not named as a diocese at the Synod of Ráith Bressail in 1111, and there was no Bishop of Ross at the Synod of Kells in 1152. 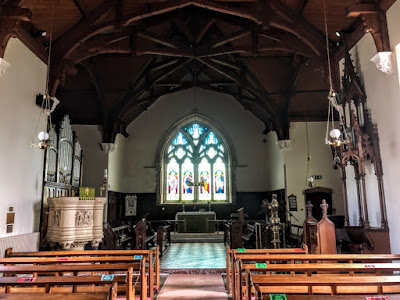 The first named Bishop of Ross is Nechtan MacNechtain, who died in 1160. A generation later, ca 1195-1198, two rival Bishops of Ross, Daniel and Florentius, went to Rome to put their claims before Pope Innocent III.

The monastic school may have gone into decline several decades before the Reformation.

When Bishop John Edmund de Courcy (1494-1517) resigned, a report commissioned for Pope Leo X described Ross as a walled city of 200 houses with the cathedral at the centre, while the bishop lived on the seashore, about half a mile from the city. The cathedral was described at the time as a cruciform, cut-stone structure, with a separate tower that had a bell. 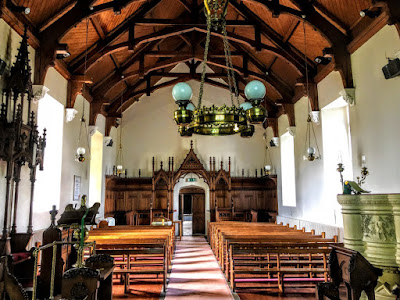 Perhaps because the cathedral was so remote at the time of the Reformation, papal appointees continued to hold the see for many decades, and the Crown did not appoint a bishop until 1582, when William Lyon was nominated Bishop of Ross, and he soon became Bishop of Cork, Cloyne and Ross (1583-1617).

He described Ross as being ‘so desolate and barbarous a place as it is not fit for an Englishman, especially one of his sort, to live in.’ Yet, when Sir Thomas Crooke, the founder of Baltimore, was accused of piracy in 1608, Lyon was among his defenders, arguing that he had worked miracles in creating a thriving town out of nothing in barely three years.

Lyon built a new school and a new bridge in Ross, and rebuilt or renovated the cathedral between 1589, and 1612. 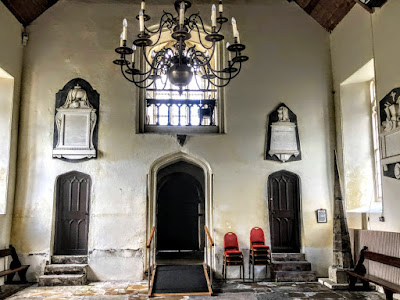 The cathedral was badly damaged in the Rebellion of 1641, when the west end of the cathedral, the nave and the tower were destroyed. The two side chapels, dedicated to the Blessed Virgin Mary and Saint Fachtna, remained standing but were used as a slaughterhouse. The bishop’s house was burned, and his deaf and dumb daughter, Elizabeth, died in the fire.

Following the wars and conflicts of the mid-17th century, the cathedral was extensively rebuilt ca 1696, with a tower and spire. 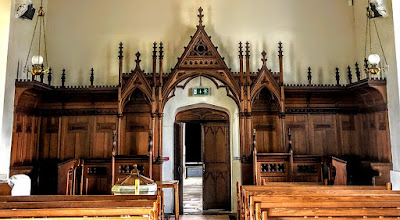 The chapter stalls in Saint Fachtna’s Cathedral, Rosscarbery, with the dean’s stall to the left of the door and the precentor’s to the right (Photograph: Patrick Comerford, 2021)

By the mid-19th century, the cathedral had two galleries, one of which was reserved for Lord Carbery who lived nearby as Castle Freke.

Significant developments continued in the cathedral in the 19th century. An increasing number of parishioners led to the north transept being added ca 1810-1815, the south transept was built ca 1835, the organ was relocated, and a dividing wall created a large narthex.

The appointment of the Very Revd Isaac Morgan Reeves as Dean of Ross in 1876 led to a period of change and refurbishment at the cathedral. During his 29 years at Rosscarbery, he removed the galleries, built the elaborate timber ceiling, and in 1895 inserted a new west door based on Cormac’s Chapel on the Rock of Cashel.

A new pulpit, lectern, font and bishop’s throne were installed, as well as communion rails, chapter stalls and stained-glass windows, mosaics were laid in the sanctuary, a new organ was put in place and a peal of five bells was installed.

The entire cathedral was restored in 2002-2005, the organ was rebuilt and the bells were restored and augmented by an additional bell, so that the cathedral now has a fine set of six bells in the key of G that are regularly rung. 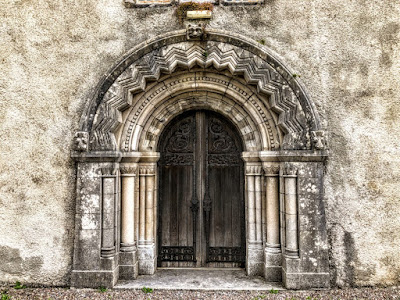 The design of the west door, inserted in 1895, is based on Cormac’s Chapel on the Rock of Cashel (Photograph: Patrick Comerford, 2021)

Much of the cathedral’s long history can be read on the plaques, monuments and windows, giving the names and dates of the people who contributed to the building, including members of the Hungerford, Carbery and Becher families.

The limestone pulpit, standing on four colonettes of red Cork marble, was erected in 1876 in memory of Canon Horatio Townsend, and depicts three parables: the Sower, the Good Samaritan and the Prodigal Son; the brass eagle lectern dates from 1878; the white marble font was presented in 1886, and the bishop’s throne is from 1895. The oak chapter stalls at the west end were erected in 1896 in memory of Margaret Hungerford. 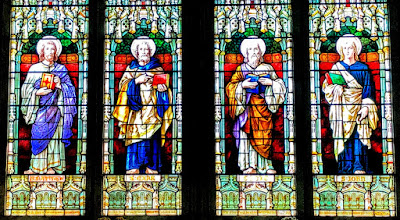 The four evangelists depicted in the stained glass in the East Window (Photograph: Patrick Comerford, 2021)

The East Window has four lancets measuring 2540 mm x 740 mm, with 16 tracery-lights, depicting the Four evangelists. The window, in memory of Dean Reeves is attributed to the London studio of Heaton, Butler and Bayne, and was designed by the artist Horatio Walter Lonsdale (1844-1919). 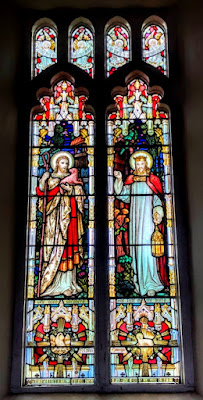 Christ as the Good Shepherd (left) and as the Light of the World (right) in a window by Mayer & Co of Munich (Photograph: Patrick Comerford, 2021)

The south nave has two lancets, measuring 2390 mm x 480 mm; by Mayer & Co of Munich and depicting Christ as the Good Shepherd (left) and Christ as the Light of the World (right).

The south transept has a rectangular window, 3050 mm x 1220 mm, depicting Saint George, made in the London studio of James Powell & Sons, and in memory of Henry Owen Dabridgecourt Becher.

The font in the narthex comes from the prebendal church of Inchidoney, in ruins since 1642.

A round-headed arch, standing isolated on the south side of the cathedral in the churchyard may be part of the mediaeval cathedral. 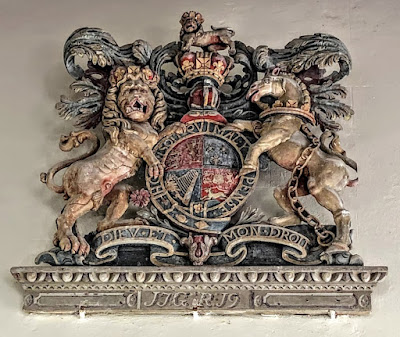 The royal arms of the House of Hanover above the door fromthe narthex into the nave (Photograph: Patrick Comerford, 2021)

The small Diocese of Ross stretches along little more than 60 km of West Cork coastline, from Ballydehob to Courtmachsherry, and has three parochial groupings: Abbeystrewry (Skibereen), Kilgarriffe (Clonakilty) and Ross.

The Roman Catholic Cathedral in the Diocese of Ross is Saint Patrick’s Cathedral, Skibbereen. 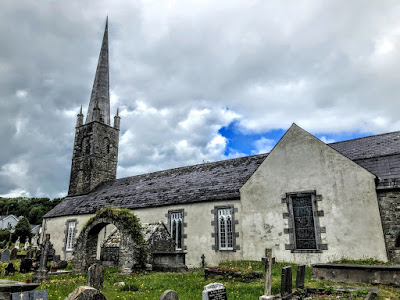 The south side of Saint Fachtna’s Cathedral in Rosscarbery (Photograph: Patrick Comerford, 2021)