Two Victorian churches
in Kanturk linked by
a pedestrian bridge 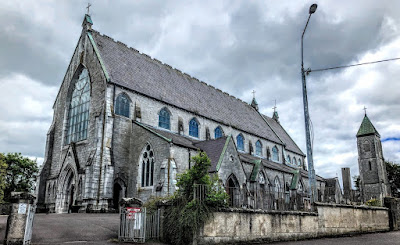 Kanturk is a busy commercial and industrial town in north Cork. Last month’s ‘road trip’ or ‘staycation’ in West Cork and Kerry was extended with a visit to Kanturk and Kanturk Castle.

Kanturk Castle was never completed and has remained unoccupied for over four centuries, and was handed over to the National Trust, and through it to An Taisce and the Irish people, by the Perceval family, Earls of Egmont and a prominent landed family in that part of north Cork.

It is not surprising, then, that the two parish churches in the town – the Church of the Immaculate Conception (Roman Catholic) and Saint Peter’s (Church of Ireland) – had early connections with the family of the Earls of Egmont. 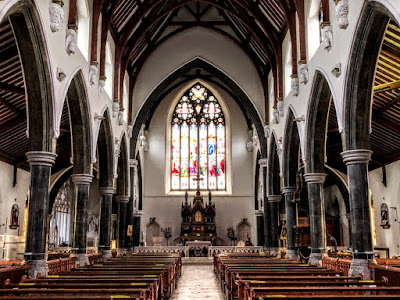 Inside the Church of the Immaculate Conception facing west, the liturgical east (Photograph: Patrick Comerford, 2021)

A new Roman Catholic parish church, beside the Courthouse in Kanturk, was built in 1867 in the transitional Gothic style, designed by John Pine Hurley, an architect who practised in Cork from the 1850s or earlier until the 1870s.

Hurley’s first major commission came in 1856 when Bishop Timothy Murphy appointed him architect for the new Saint Colman’s College in Fermoy. Two years later, he designed improvements to the chapel of Saint Mary’s Convent, Cobh, in 1858, and in 1867 he designed the new Catholic church and convent schools at Kanturk. Nothing is known of Hurley in Cork after the mid-1870s, and he may have moved to Dublin or have emigrated. 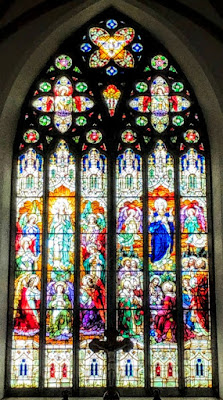 The chancel window in the Church of the Immaculate Conception (Photograph: Patrick Comerford, 2021)

This is an imposing Gothic-style church that is oriented on a west-east axis rather than the traditional liturgical east-west axis. It has fine craft work in its exterior details, and retains many original features such as the stained-glass windows, carved limestone detailing and timber batten doors.

The gable-fronted church has a projecting entrance frontispiece, a seven-bay nave, a single-bay chancel, recessed six-bay side aisles with gabled porches at the east (liturgical west) ends, a gabled sacristy, a two-bay transept, and gabled confessional projections.

It is built with cut tooled limestone walls with a moulded plinth, and there are buttresses at the corners and between the clerestory windows.

Figures in the east window (liturgical west) in the Church of the Immaculate Conception (Photograph: Patrick Comerford, 2021)

The church has pointed arch windows, trefoil lights, stained-glass, chamfered limestone surrounds, hood-mouldings and carved tracery. The chancel has a traceried six-light window and rose window, with a trefoil at the top of the gable.

There are latticed lancet windows in the porches with hood-mouldings.

The order arch style entrance doorway, with timber battened doors, has a shallow gable, a tympanum with triangular window opening, and pair of door openings divided by and flanked by engaged colonnettes with decorative capitals and surmounted by a quatrefoil panel with an inscribed date plaque. All this is flanked by paired short lancet windows with hood-mouldings.

A freestanding ashlar limestone bell tower stands to the north-west of the church. 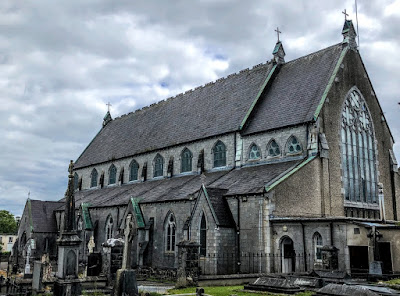 The Church of the Immaculate Conception at the west (liturgical east) end (Photograph: Patrick Comerford, 2021)

Saint Peter’s, the former Church of Ireland parish church in Kanturk, stands on an elevated and prominent site on a hill above the east side of the town. The church had entrance gates at both Egmont Place in the centre of the town, and on Freemount Road, on the north-east entrance to the town.

This is a Gothic-style church designed in 1858 for the Church Commissioners by Joseph Welland, and demonstrates fine craft work too. Although no longer in use, the character and charm of this building has endured throughout the years. Its features include a decorative bellcote, stained-glass windows and limestone dressings.

The former church stands on a prominent position on a hill at the entrance to Kanturk from the north-east, and it forms a pleasant and dominant feature in both the streetscape and surrounding landscape. 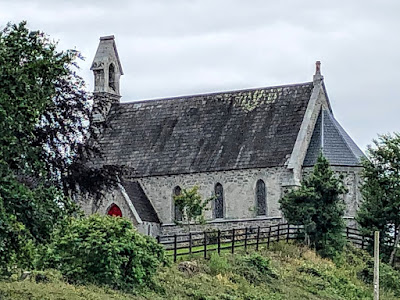 The Kanturk and Churchtown estates passed from Earl of Egmont in the 1840s to Sir Edward Tierney (1780-1856), a prominent solicitor from Rathkeale, Co Limerick.

Sir Matthew Tierney was the physician to King George III and King William IV. When Matthew died in 1844, his brother Edward succeeded as second baronet. Sir Edward Tierney was agent and legal adviser to Henry Perceval (1796-1841), 5th Earl of Egmont.

Lord Egmont was known for his drunkenness and loose living. When he died in 1841, he left all his estates in England and Ireland to his agent, Edward Tierney, while his distant cousin, George Perceval (1794-1874), became 6th Earl of Egmont without receiving one penny from his ancestral estates.

Tierney built a footbridge crossing the River Dalua, close to the mill first built in the 17th century by the Perceval family. Tierney’s new bridge replaced an earlier wooden bridge a short distance upstream and it offered a pedestrian link between the two parish churches in Kanturk, Roman Catholic and Church of Ireland.

Sir Edward Tierney died in 1856 leaving the Egmont estates to his son-in-law, the Revd Sir William Lionel Darell (1817-1883). In the early 1860s, the 6th Earl of Egmont took a legal action to regain the Egmont estates which was settled out of court. The estates, including Kanturk Castle and Liscarroll Castle in North Cork, were returned to Lord Egmont and Sir Lionel received £125,000 and costs. 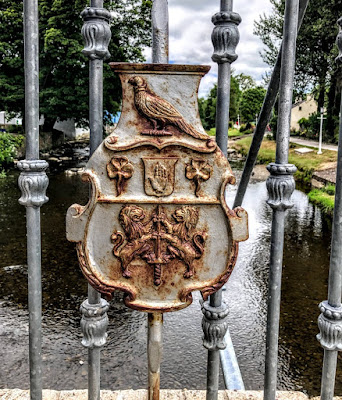