Visiting Versailles and the Parthenon on the banks of the Barrow 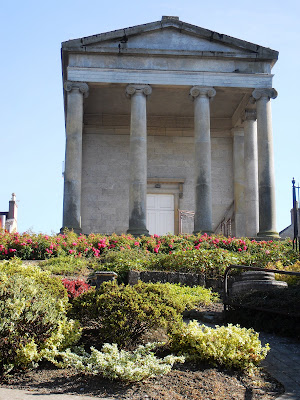 The courthouse in Bagenalstown, inspired by the Parthenon in Athens, was part of Walter Bagenal’s vision for a New Versailles in Co Carlow (Photograph: Patrick Comerford, 2011)

I was in Bagenalstown, Co Carlow, last night for the ordination of the Revd Helen Oxley as deacon in Saint Mary’s Church, Dunleckney, by the Bishop of Cashel and Ossory, the Right Revd Michael Burrows.

It was a beautiful sun-filled, summer, Sunday evening, and for an hour or so before the service, there was an opportunity to stroll through this small town off the main Carlow-Kilkenny road.

The official name of the name is its Irish name of the town, Muine Bheag or Muinebeag, which means “small thicket.” This is sometimes anglicised as Moneybeg, but virtually everyone knows the place as Bagenalstown.

The name Bagenalstown comes from the Bagenal family of Dunleckney Manor, who based their design for the planned estate town on Versailles. Some claim the town’s 19th century courthouse resembles a building in Versailles; others say it was inspired by the Parthenon on the Acropolis in Athens.

The courthouse stands on a raised position in the town and looks down on the River Barrow. It was designed by the Scottish-born architect, Daniel Robertson, for Walter Bagenal of Dunleckney Manor, as part of Bagenal’s plan for a new town built on a classical plan on the banks of the River Barrow.

Bagenal hoped to encourage trade and access to his estate town, and originally considered naming his new town “New Versailles.” However, his efforts were frustrated and his plans were curtailed when the main road was re-routed away from the new town.

The courthouse, which was built ca 1835, is now the only legacy of this grand dream for a New Versailles on the banks of the Barrow. But today it is empty and fenced off, and its future looks in doubt. It is an important part of Irish cultural legacy, and I have to hope that this architectural gem is not in danger of being lost to future generations. 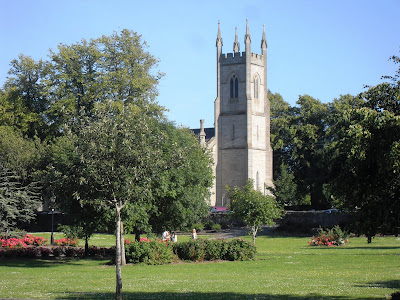 The Church of Ireland group of parishes is Dunleckney Union because the parish church for the area was in Dunleckney, about 3 km north of Bagenalstown. As the town grew in the mid-19th century, the church was replaced by a new church, Saint Mary’s, in the town centre. The church was designed by Frederick Darley, architect for the ecclesiastical commissioners, and was consecrated on 27 June 1844.

The other churches in the Dunleckney Union are the Church of the Good Shepherd, Lorum; Saint John’s, Nurney; and Saint Peter’s, Killedmond.

Beauchamp Bagenal, was a man of singular character who was said to have the eccentricity of the Bagenals, the parsimony of the Beauchamps, and the pride of the Mathews. He fought at least ten duels most of them in the churchyard in Killinane, where he managed to remain standing upright by resting against one of the tombstones. Those he duelled with included his cousin, Beauchamp Bagenal Harvey, later executed as one of the leaders of the United Irishmen in Co Wexford in 1798.

He was an example of the “fire-eating” Irish squires of the day portrayed by Maria Edgeworth in Castle Rackrent. Sir Jonah Barrington said of him: “He had fought a prince, jilted a princess, intoxicated the Doge of Venice, carried off a Duchess from Madrid, scaled the walls of a convent in Italy, narrowly escaped the inquisition at Lisbon, concluded his exploits by a duel in Paris; and returned to Ireland with a sovereign contempt for all continental men and manners, and an inveterate antipathy to all despotic kings and arbitrary governments.” 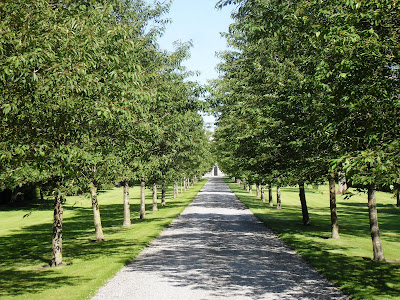 When he died in 1801, his estates passed to his son, Walter Bagenal (1762-1814), who was MP for Co Carlow from 1802 to 1812. When Walter died in 1814, the family line came to an end, although the name was resumed soon after by descendants of Beauchamp Bagenal’s daughter, Sarah Newton. Walter was buried at Staplestown Church, where his monument reads: “Erected by his disconsolate widow and daughter to perpetuate the memory of a husband and parent, honoured and respected.”

The Bagenal and Newton family, who inherited Dunleckney Manor, also commissioned Robinson to design a new manor house in the then-fashionable gothic revival style. Looking around the walls of the Saint Mary’s Church, Dunleckney, last night, the patronage and benign interest of the family in the life of the parish was obvious.

Hopefully, a benign patron or an enlightened mind is going to make sure the courthouse is not allowed to deteriorate.
Posted by Patrick Comerford at 06:00