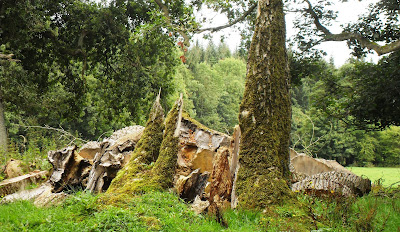 At the end of August, I spent a few peaceful days at Castle Leslie, walking through the woods and by the lakes around Glaslough. It was a time for rest and reflection, and gentle memories of that time came back as I strolled around the shores of Lough Erne in Co Fermanagh at the end of last week.

With that time of reflection and rest in Glaslough in mind, my choice of a Poem for Lent this morning is ‘Forest Song’ by the Irish writer and diplomat, Sir Shane Leslie (1885-1971) of Castle Leslie, who was first cousin of Sir Winston Churchill.

Sir John Randolph Leslie was born on 24 September 1885 in Stratford House, London, into an old land-owning family with an estate of almost 50,000 acres in Co Monaghan, Co Tyrone, Co Fermanagh and Co Donegal that included Castle Leslie in Glaslough, Co Monaghan, the village of Pettigo on the Tyrone-Donegal border, and Lough Derg, the well-known pilgrimage lake and island known as Saint Patrick’s Purgatory.

His father, Sir John Leslie, was descended from John Leslie, Bishop of the Isles, who moved from Scotland to Ireland in 1633 when he became Bishop of Raphoe, and who became Bishop of Clogher after the Caroline Restoration, in 1661. His mother, Leonie Jerome, was the sister of Winston Churchill’s mother, Jennie Jerome; both were daughters of Leonard W. Jerome.

Shane Leslie’s early education began at home in Castle Leslie with a German governess, and he then went on to Ludgrove, a prep school in Berkshire, to Eton and to King’s College, Cambridge. While he was still an undergraduate Cambridge in 1907, he became a Roman Catholic. Later he also became a supporter of Irish Home Rule and adopted the name Shane as an Anglicised Irish variant of his name John.

After graduating in 1907, he began to travel widely, visiting Russia, where he stayed with Leo Tolstoy at Yasnaya Polyana, and where he developed many of his social values. On his return, his cousin Winston Churchill took an interest in his political ambitions and introduced him to John Redmond, the leader of the Irish Nationalists in the House of Commons. Redmond persuaded Leslie to run as a Home Rule candidate in Derry City in 1910, but he failed by 57 votes to win the seat.

Now deeply interested in the Gaelic Revival, he travelled to the US the following year. In 1912, he married Marjorie Ide, the youngest daughter of Henry Clay Ide, the US ambassador to Spain and Governor-General of the Philippines.

At the outbreak of World War I, his parents and other family members moved temporarily to London while he enlisted in a British Ambulance Corps. When he became ill he was sent to a military hospital in Malta, and there he finished his first major book of verse, The End of a Chapter (1916).

He spoke out against the execution of the leaders of the Easter 1916 Rising in Dublin, and was sent back to Washington DC to help the British Ambassador, Sir Cecil Spring Rice – who was from a well-known Kerry family and the author of the hymn ‘I vow to thee my country’ – to soften Irish-American hostility to Britain and to secure US intervention in the war. But he continued to look to Ireland for literary inspiration and edited a literary magazine, Ireland, that published new Irish verse.

In the 1918 election, the Irish Parliamentary Party lost massively to Sinn Féin, putting an end to Shane Leslie’s the political ambitions of a disappointed Shane Leslie. Feeling unwanted in Ireland and abandoned by the British, and no longer able to rely on an income from his landholdings, he dedicated himself to a literary life, becoming a member of the Irish Academy of Letters.

In the decades that followed, he wrote extensively and published over forty volumes, including poetry, novels, short stories, memoirs, biographies and essays, and a study, from a conspicuously Roman Catholic perspective, of the Oxford Movement (1933). His most significant literary contribution is Doomsland (1923).

In 1922, F Scott Fitzgerald dedicated his novel The Beautiful and Damned to Shane Leslie. That year, in a review of James Joyce’s Ulysses in the Dublin Review, Leslie said: “In this work the spiritually offensive and the physically unclean are united.” He accused Joyce of “little care for the sacra of Catholic or Protestant Christianity,” equating the book with “the lowest depths of Rabelaisian realism.”

He added: “The book must remain impossible to read, and in general undesirable to quote … Our own opinion is that a gigantic effort has been made to fool the world of readers and even the Pretorian guard of critics … From any Christian point of view this book must be proclaimed anathema, simply because it tries to pour ridicule on the most sacred themes and characters in what has been the religion of Europe for nearly two thousand years.”

His time as the editor of the Dublin Review in the 1920s came to an end with the hierarchy’s disapproval of the sexually explicit scenes in the first edition of his autobiographical novel, The Cantab (1926).

In his unpublished memoirs, he wrote

The wealth of the Leslies had waned by the 1930s following the Wall Street crash of 1929 and because the farm was by then loss-making. Finding the business of running his estate at Castle Leslie uncreative and boring, he transferred the estate to his eldest son, John Norman Leslie, who later became the 4th baronet, and he transferred Saint Patrick’s Purgatory on Lough Derg to the Roman Catholic Bishop of Clogher, Eugene O’Callaghan. But the Leslies continued to maintain their lifestyle, attendance at the London season and entertaining distinguished visitors at Glaslough, including Anthony Eden.

At the outbreak of World II in 1939, he joined the Home Guard. He spent the remainder of his life between Glaslough and London. With the death of his father in 1944, he succeeded to the family title as the third baronet.

His spent his old age at Hove, and the last book on which he was working was a biography of the hero of his undergraduate youth, MR James. He died on 14 August 1971 in Hove, Sussex, at the age of 85, and was buried at Castle Leslie in Glaslough. His widow died in 1995.

Throughout his, life, Shane Leslie was a passionate advocate of reforestation. The woods and trees around the Castle Leslie estate owe much to this concern, which makes ‘Forest Song’ an appropriate poem to select this morning. 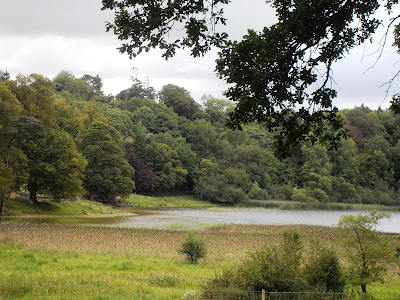 A still moment of reflections by the forests and lakes on the Castle Leslie estate (Photograph: Patrick Comerford)

All around I heard the whispering larches
Swinging to the low-lipped wind;
God, they piped, is lilting in our arches,
For He loveth leafen kind.

Ferns I heard, unfolding from their slumber.
Say confiding to the reed:
God well knoweth us, Who loves to number
Us and all our fairy seed.

Voices hummed as of a multitude
Crowding from their lowly sod;
’Twas the stricken daisies where I stood.
Crying to the daisies’ God.