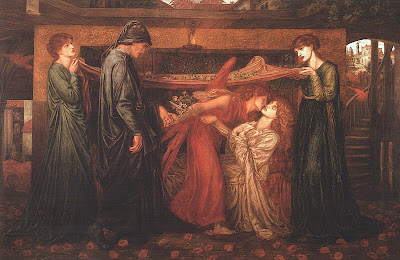 Christina Rossetti’s poem, ‘In the bleak mid-winter,’ has become one of the best-known and best-loved Christmas carols. But it is less well-known that she also wrote a poem set in mid-Lent. This sonnet, ‘Mid-Lent,’ first published in Time Flies, was based on an earlier, unpublished sonnet.

We are more than mid-way through Lent, and I’m sure for many people their Lenten resolutions are flagging, perhaps even with a sense of defeat.

I suppose Christina Rossetti understood the difficulties we face half-way through Lent when she wrote in another poem, ‘The Convent Threshold’:

But she found strength in Lent, too, as reflected in one of the many prayers she wrote: “Lord God, whose strength is sufficient for all who lay hold on it, grant us in your mercy to comfort our hearts and be strong. Humility, temperance, purity, large-heartedness, sympathy, zeal – grant us these evidences of faith, servants of hope, fruits of love; for the sake of Jesus Christ, our strength, our righteousness, and our hope of glory. Amen.”

With those thoughts in mind, I also found encouragement in words from Cardinal Basil Hume, in The Mystery of the Cross: “It is important to reflect on how we face up to the cross in our lives. In a way we train for it during Lent by imposing some self-denial, some sacrifice, on ourselves: what we call ‘giving up something for Lent’.

“That may sound negative and in many ways it is. But we must remember that it is done in order to help us turn to God in prayer, to focus our minds on him, and raise our hearts in desire for him. Whatever happens to us is allowed by him in order that we should draw closer to him, for that is the one thing Almighty God wants: that we should be close to him and that he should be close to us.”

My illustration this morning is ‘Dante’s Dream at the Time of the Death of Beatrice,’ a painting from 1871 by her brother, the English Pre-Raphaelite painter, Dante Gabriel Rossetti. This is Rossetti’s largest painting and it hangs in the Walker Art Gallery in Liverpool, which bought it directly from the artist in 1881 for £1,575.

Rossetti had a life-long interest in Dante, and the painting was inspired by Dante’s poem ‘La Vita Nuova.’ In this poem, Dante dreams that he is led to the death-bed of Beatrice Portinari, the woman who was the object of his unfulfilled love. Dante, in black, stands looking towards the dying Beatrice who is lying on a bed. Two female figures in green hold a canopy over her. An angel in red holds Dante’s hand and leans forward to kiss Beatrice.

Beatrice was the principal inspiration for Dante’s poem ‘La Vita Nuova,’ and also appears as his guide in the ‘Divine Comedy’ (La Divina Commedia) in the last book, Paradiso, and in the last four canti of Purgatorio. There she takes over as guide from the Latin poet Virgil, because, as a pagan, Virgil cannot enter Paradise and because, being the incarnation of beatific love, as her name implies, it is Beatrice who leads into the beatific vision.

In the painting, Rossetti creates a visionary world with complex symbols. The symbols include the green clothes of Beatrice’s attendants, signifying hope; spring flowers in the foreground symbolising purity; and red doves for love.

Is any grieved or tired? Yea, by God’s Will:
Surely God’s Will alone is good and best:
O weary man, in weariness take rest,
O hungry man, by hunger feast thy fill.
Discern thy good beneath a mask of ill,
Or build of loneliness thy secret nest:
At noon take heart, being mindful of the west,
At night wake hope, for dawn advances still.
At night wake hope. Poor soul, in such sore need
Of wakening and of girding up anew,
Hast thou that hope which fainting doth pursue?
No saint but hath pursued and hath been faint;
Bid love wake hope, for both thy steps shall speed,
Still faint yet still pursuing, O thou saint.