A journey through Lent 2016
with Samuel Johnson (3) 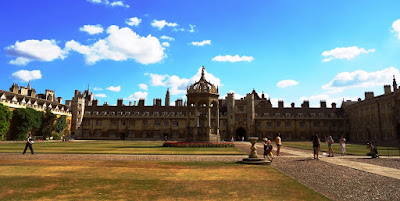 After the meeting yesterday [11 February 2016] of the Trustees of the Anglican mission agency previously known as USPG (the United Society for the Propagation of the Gospel, or Us, the United Society), I spent a little time in the late afternoon visiting the places off Fleet Street where Samuel Johnson (1709-1784) lived in the 18th century.

On my way back through Stansted Airport late last night, I winsomely thought of how near I was to Cambridge, and wondered whether I should have stayed there last night and caught an early flight this morning. As I waited late into the night for a delayed flight, I also recalled the many pleasant times I have spent in Cambridge in recent years staying at Sidney Sussex College during summer schools and conferences organised by the Institute for Orthodox Christian Studies.

During Lent this year, I am taking time each morning to reflect on words from Samuel Johnson, the Lichfield lexicographer and writer who compiled the first authoritative English-language dictionary.

I am reminded this morning [12 February 2016] how in February 1765, Samuel Johnson visited Cambridge and stayed at Trinity College, where he had lengthy discussions about John Milton, who had been an undergraduate at Christ’s College in the previous century, and Isaac Newton, who was a Fellow of Trinity College although he had never been ordained.

Shortly after that visit to Cambridge, in a Lenten meditation looking forward to Good Friday and Easter Day, Johnson wrote:

I purpose again to partake of the Blessed Sacrament; yet when I consider how vainly I have hitherto resolved at this annual commemoration of my Saviour’s death, to regulate my life by his laws, I am almost afraid to renew my resolutions.

Since the last Easter I have reformed no evil habit; my time has been unprofitably spent and seems as a dream that has left nothing behind. My memory grows confused, and I know not how the days pass over me. Good Lord, deliver me!