The view from the peak of Sorrento Park across the Dalkey Islands, Sorrento Terrace, Killiney Bay and the Wicklow Mountains (Photograph: Patrick Comerford, 2016; click on image for a full-size view)

I am working on a paper for publication in April to mark the 400th anniversary of the death of William Shakespeare on Saint George’s Day, 23 April 1616.

There is a persistent legend that the Bard’s description of Elsinore in Hamlet is based on a description of by the composer John Dowland (1563-1626). One of Dowland’s better known works is the lute song Flow my tears. The first verse is:

Flow my tears, fall from your springs,
Exil’d for ever let me mourn;
Where night’s black bird her sad infamy sings,
There let me live forlorn.

His best known instrumental work is Lachrimae, or Seaven Teares, Figured in Seaven Passionate Pavans, a set of seven pavanes for five viols and lute, each based on the theme derived from the lute song Flow my tears.

The legend about Shakespeare and was embellished – without any supporting historical evidence – by the Irish composer, William Henry Grattan Flood, who spent much of his working life as the organist of Saint Aidan’s Cathedral, Enniscorthy, Co Wexford.

In mediaeval times, Dalkey was the port for Dublin, with large ships anchoring and unloading their cargoes in the deep, sheltered waters of Dalkey Sound, and the “seven castles” of Dalkey were built to store the goods.

I could hardly resist the temptation to visit Dalkey this afternoon, to see the plaque in Sorrento Park celebrating the supposed connection with Dowland and to visit Coliemore Harbour. 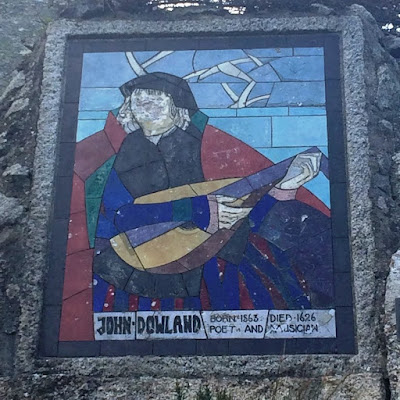 Sorrento Park is just across the road from both Sorrento Terrace and Coliemore Harbour, and I found the Dowland memorial near the south-east corner of the park, close to the entrance opposite Sorrento Terrace.

The Irish artist Sarah Purser (1848-1943) designed the memorial to John Dowland in 1937. The work was carried out by HV McGoldrick, and it is a rectangle of mosaic work set in granite outcrop near the south-east corner of the park.

It was restored in 1996 by Dalkey Community Council but has since been defaced – the face of Shakespeare’s friend has been gouged out crudely by uncultured vandals. Although you can still see Dowland’s hands plucking at the lute, it is impossible to know whether Sarah Purser portrayed him with seven flowing tears.

From the summit of the park I looked out to the Dalkey Islands, down onto Sorrento Terrace, and out across Killiney Bay towards Bray Head, the Sugar Loaf the Wicklow Mountains.

Although the roof has been removed from the once-fine Victorian bandstand, Sorrento Park is a typical Victorian park and was gift to the people of Dalkey from Lady MacDonnell, whose family built Sorrento Terrace.

The MacDonnell family handed over Sorrento Park to trustees who opened it to the public in 1894, although it had been used for many public events before that date.

Lady MacDonnell was born Blanche Ann, daughter of Francis Skurray of Beckington, Somerset, and in 1847 she married Sir Richard Graves MacDonnell (1814-1881) of Sorrento House. He was a lawyer, judge and colonial governor, and his colonial posts included Governor of the British Settlements in West Africa, Governor of Saint Vincent, Governor of South Australia, Governor of Nova Scotia and finally Governor of Hong Kong (1865-1872).

During his time in Hong Kong, MacDonnell developed Victoria Peak, and built a hospital for the local Chinese population. But he ran up such a huge budget deficit the government had to ask HSBC for a financial aid package. Several places around the world are named after him, including MacDonnell Road in Hong Kong, and the MacDonnell Ranges and Sir Richard Peninsula in Australia.

Richard MacDonnell was the visionary behind Sorrento Terrace, famous today as the most expensive row of houses in Ireland. His home originally sat on five acres of lands that included the lands now known as Sorrento Park.

He was a man of broad vision and liberal views and an early advocate of Catholic Emancipation when such views were unpopular in TCD.

The story is told that on one occasion he was showing a lady around the library in TCD. Clasping her hands together, she exclaimed: “Oh Mr Provost, pray Mr Provost, have you read all these books?” To this he replied: “In time my dear lady, in time.”

His house, Sorrento Cottage, is now owned by The Edge of U2. MacDonnell named the house after Sorrento on the Bay of Naples, and he compared Killiney Bay with the Bay of Naples and the Great Sugar Loaf with Mount Vesuvius.

In 1845, the family built Sorrento House, the first and largest of the houses on Sorrento Terrace. The family stipulated that each house had to adhere strictly to the design of architects Frederick Darley and Nathaniel Montgomery. 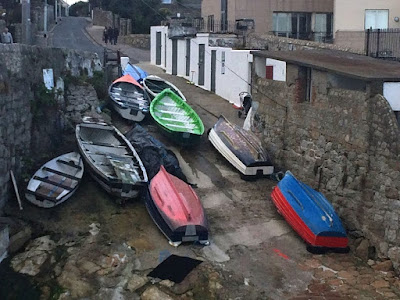 Down at Coliemore Harbour this afternoon, the scene with colourful upturned boats was more like one of the small villages in Cinque Terre than Sorrento. There were views out to the Dalkey Islands, and we took further advantage of the views from the park above the harbour. 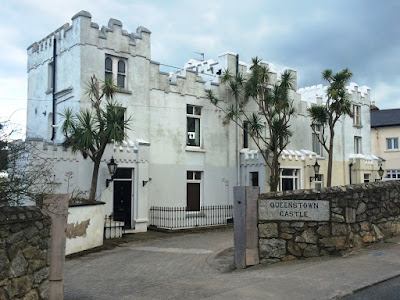 Queenstown Castle … one of the many Victorian Houses on Coliemore Road (Photograph: Patrick Comerford, 2016)

Coliemore Road is lined with an interesting collection of Victorian Houses, including Queenstown Castle and Springfield House.

Behind a more modern block of apartments known as Berwick House, is the site of Scotch Rath. Here I found a fading memorial to Walter Berwick, son of the Revd Edward Berwick of Leixlip, Co Kildare, who was the second President of the Queen’s College, Galway (now NUI Galway) from 1850 until he died in office in 1877. The memorial was erected by his wife Harriette Berwick and also remembers their only child Harriette Mary Berwick. 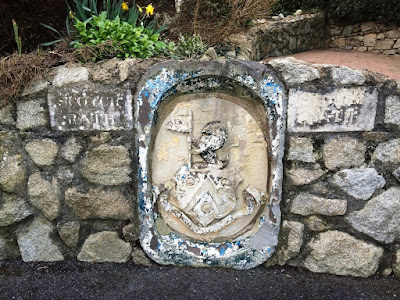 The memorial to Walter Berwick on the site of Scotch Rath (Photograph: Patrick Comerford, 2016)

From Dalkey we continued on to Bray, for a late lunch in Carpe Diem and a walk along the beach and the promenade. It was a fitting end to a busy weekend.

Posted by Patrick Comerford at 21:58