Comberford residents are upset at
abandoned state of closed church 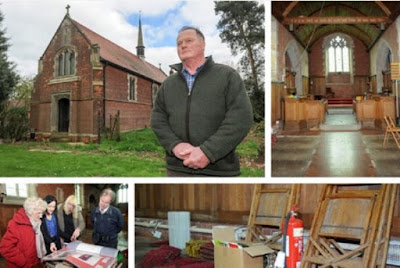 During my recent visit to Lichfield, I missed an opportunity for a return visit to Comberford village. Now I have read a sad report, published in the Tamworth Herald earlier this month that talks about the distress local residents are feeling about the state of the church in Comberford, which was closed at the end of 2013.

In a report headed ‘Tamworth family furious after they claim diocese left church ‘gutted’,’ Jordan Coussins reports how a heartbroken family have spoken of their disgust after the church in Comberford was gutted of its artefacts by the local diocese.

According to the report, descendants of the Paget family, who own the land on which Saint Mary’s and Saint George’s Church stands, the ‘Church of England has taken contents not belonging to them.’

The church, which stands in Manor Lane, has been locked in a legal battle of ownership for almost four years since it was closed by the Diocese of Lichfield and the Paget family now claims that the diocese tried to sell the church.

Charles Hodgetts, who is a direct descendent of Francis Paget, a former owner of the church site, has called the situation ‘disgusting’ and has vowed to continue the fight for justice.

‘It’s tragic,’ he told the Tamworth Herald. ‘It’s complete vandalism what they have done to it. They have just ripped out items that were gifted by the Paget family.

‘These things should never have been taken from here – the church has been left like a building site.

‘There is loose wiring everywhere. They have reduced a once beautiful church into nothing.

‘It should have never have come to this. I’m so disappointed with the state it has been left in.’

The church was originally donated to a Lichfield Diocesan Trust for the people of Comberford by the Paget family who lived at Elford Hall. The first stone was laid at a special ceremony in 1914 and the building was completed in 1915.

Joanne Cliffe, who is an active member of the Friends of Comberford Church, has vowed to give the church back to the people.

She told the Tamworth Herald: ‘What we want to do is, first and foremost, get the building reinstated as it was when the church closed. And the now owners have agreed for the building to be for the community. The aim is to hold some events for the community as a whole, not just the people of Comberford.’

She added: ‘Because the church was given to the people of Comberford, we want to give it back.’

A spokesman for the Diocese of Lichfield told the Tamworth Herald: ‘Following the church's closure in 2013 it was agreed to give the building to the family who originally donated the land on which it stands. Under due legal process, after permission was granted by the Chancellor of the Diocese, the fixtures of the building were removed and given to other local churches.’ 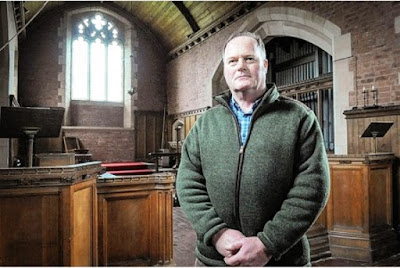 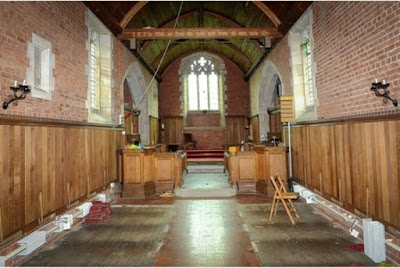 The church has been gutted of its artefacts 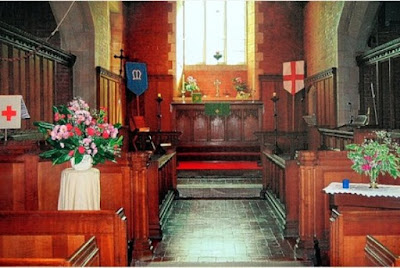 How the church looked before it was closed 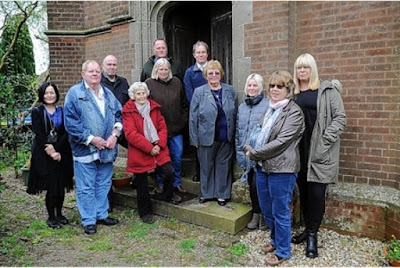 Local residents and friends of the church visit the site

But the closure of the church can be the harbinger of the death of a village … and the church should be the last place to condemn a village to death. Comberford village, in Lichfield Rural District, is two or three miles north of Tamworth and about four or five miles east of Lichfield … as the crow flies. The village is without either a post office or a pub, and in recent years the village church closed, having been at the heart of the village for over a century, is closing.

Until recently, the parish described itself on its website as being ‘on the traditional side of the Church. That said, we have embraced the new services of Common Worship very happily and also enjoy a mixture of traditional hymns and modern music. But we are Catholic in the best sense of that word, seeing ourselves as rooted in the Holy Eucharist, and the traditional vestments and the reserved sacrament.’ 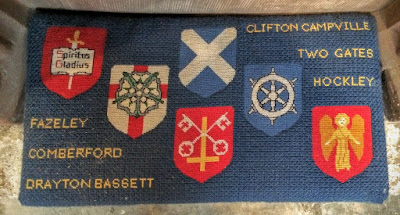 The emblems of Saint Mary (white rose) and Saint George (red cross) recall the church in Comberford on a hassock in Lichfield Cathedral (Photograph: Patrick Comerford, 2016)

The closure of the post office or the local pub is a bitter blow to a village. But if the village church stays open against all the odds, then it is a living testimony to our faith in the villagers and to our faith in the Resurrection, affirming the people who live there and asserting that their value is not to be assessed in merely fiscal terms or by counting the financial contributions they make to the life of the wider Church. 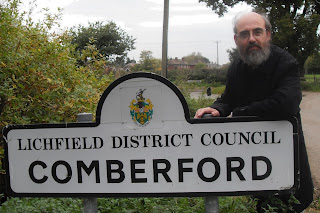 Some estimates say about 20 Church of England church buildings are closed for worship each year, and the church in Comberford joined that list in 2013.

Saint Mary’s and Saint George’s Church is on Manor Lane, but the parish does not own the surrounding land, and access to the church is along a public right of way. But still this church has been the focus and point of contact in Comberford village for years. The attractive interior decoration and the rounded ceiling – both in wood – helped to created a sense of peace and tranquility.

There is a truism that we do not inherit what we have from the past but hold it in trust for the future. The future for the church in Comberford may be something very different than we can imagine. It would be sad to see it become another private house in the village. It still seems to me that its location offers the potential for a retreat centre or a centre for the arts and spirituality. The expansion of Tamworth may open potential for future generations. Who knows?

Despite the report in the Tamworth Herald earlier this month, I hope that with a little imagination this church this church can remain a great resource for local people and a centre for the community for generations to come. 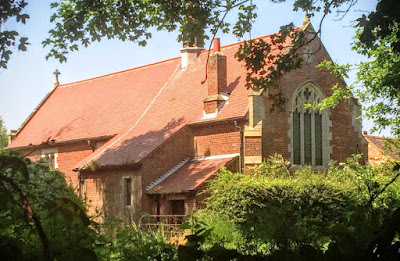