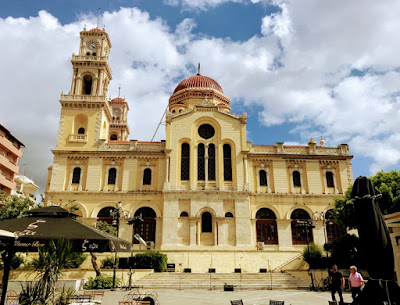 Sitting beneath the towering Cathedral of Saint Minas in Iraklion (Photograph: Patrick Comerford, 2017)

A few weeks ago, after visiting the Museum of Christian Art in the former Church of Saint Catherine of Sinai, I found myself sipping coffee in the large paved square in front of the church, with the Cathedral of Saint Minas (Aghios Minas) beside me.

I have visited this cathedral many times in the past, and shortly after my ordination I bought a fitted cassock in the church shop attached to the cathedral. On this busy sunny afternoon earlier this month [5 July 2017], and before returning to Rethymnon, I was also visiting the Church of Saint Titus, dedicated to Saint Titus, who was left behind on Crete by the Apostle Paul as the first Bishop of Crete.

But it was some years since I had visited Aghios Minas, and it was only after returning to Rethymnon that I was reminded of the associations of this cathedral with the writings of Crete’s greatest literary figure, Nikoas Kazantzakis.

The head of Saint Titus is preserved in a reliquary in the Church of Saint Titus, and Saint Mark’s was the cathedral of Venetian Iraklion. So, I wondered, how did Saint Minas become the patron saint of Iraklion and give his name to the city’s cathedral? And why is Minas an unusual name among men and boys in Iraklion.

Saint Minas is the patron saint of Iraklion and his feastday on 11 November is a public holiday. 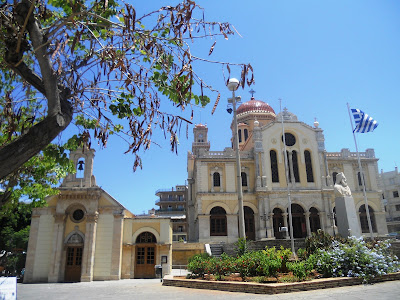 The cathedral towers above the smaller, original Church of Saint Minas, known locally as Little Saint Minas (Μικρός Αγιος Μηνάς), was built in 1735 and became the cathedral church or Metropolis of Crete for the first time since the beginning of the Turkish occupation of Crete.

The church took its name from Saint Minas or Saint Menas, who was born in Egypt in the mid-third century to non-Christian parents. He converted to Christianity in teens, and later pursued a military career, becoming a cavalry officer in the Imperial Roman army in Asia Minor.

During the reign of Emperors Diocletian and Maximian, Christians were persecuted between 303 and 311 AD, and soldiers were ordered to arrest and torture Christians who refused to renounce their faith.

But Saint Minas remained faithful to Christianity. He resigned from the army and went to live as a hermit in the mountains. When he was about 50 years of age, he had revelation of his impending death as a martyr. He left the safety of the mountains, returned to the city, and there declared his faith.

He was arrested, imprisoned and tortured; he was whipped, flayed and dragged naked along a street of sharp stones. But, despite these horrific sufferings, he refused to renounce his faith and was beheaded on 11 November 309.

Saint Minas was declared the patron saint of Iraklion during the Turkish occupation. The differences between Christians and Muslims on Crete led to violent conflicts and attacks.

Six bishops of Crete and many priests and lay people from Iraklion were slaughtered by Turks in the ‘Little Church of Saint Minas’ on 24 June 1821. Five years later, tradition recalls, on Easter Day 18 April 1826, while the Christians of Iraklion were in church, a Muslim mob plotted a mass murder. However, an aged officer on horseback, resembling their fiercest warrior, Ayan Agha, intervened, calming the mob and dispersing them.

Why did a well-known Turkish persecutor of the Christians act as their protector at the last moment? The Christians attributed the appearance of the rider to a miraculous intervention by Saint Minas, saying it was the saint and not Ayan Agha, who appeared to the Turks.

Ever since, Saint Minas has been depicted in icons as a Roman general on horseback and honoured as the patron saint of Iraklion.

The cathedral is one of the largest in Greece. The foundation stone was laid on 25 March 1862 on a site is said to have been pointed out by a monk whom claimed to have a vision of Saint Minas.

The cathedral was designed by Athanassios Moussis, the architect who also designed the rebuilding the Church of Aghios Titos and the former Turkish barracks on Eleftherias Square that now houses the Prefecture and the Law Courts.

Building work on the cathedral was interrupted 150 years ago during the Cretan rebellion in 1866, when the Monastery at Arkadi was destroyed in a series of explosions.

In his semi-autobiographical novel Report to El Greco, Nikos Kazantzakis describes Saint Minas as the defender of the city at this time. He recalls the legend of a saint did not remain in his icon, but descended from his icon every night and went out on patrol in the city.

‘He closed whatever doors the Christians had forgetfully left open, he whistled to night owls to return to their homes, he stood outside the doorway and listened absorbedly, with satisfaction, whenever he heard singing.’

The legends said that ‘whenever the Turks sharpened their knives and prepared to fall upon the Christians, Saint Minas sprang from his icon once more in order to protect the citizens.’

For the people of Iraklion, Kazantzakis recalled, ‘Saint Minas was not simply holy, he was their captain. They called him Captain Minas and secretly brought him their arms to be blessed. Even my father lighted candles for him. God only knows what he must have said to him and what reproaches he heaped on him for delaying so long to liberate Crete.’

Building work on the cathedral resumed in 1883. Despite these difficult times in Crete, the building project was supported enthusiastically and newspaper reports from the time describe a sailing ship arriving in the harbour laden with building materials for the new cathedral. The building committee did not have enough money to pay workers to carry the cargo from the ship to the building site, but schoolchildren offered to unload the ship and formied a human chain from the harbour to Saint Minas, singing as the hard work progressed.

The new cathedral was opened by Bishop Timotheos Kastrinoyiannis with great pomp in 1895, with three days of celebrations.

Long after the Turks had left Crete and island was incorporated into the modern Greek state, Saint Minas continued to be revered as the protector of the city. It is claimed that protected the cathedral during the heavy bombing of Iraklion on 23 May 1941. A large bomb fell on the cathedral but failed to explode.

When The Last Temptation of Christ (1951) was published, the Roman Catholic Church placed it on the Index of Prohibited Books. Nikos Kazantzakis’ reaction was to send a telegram to the Vatican quoting Tertullian: ‘Ad tuum, Domine, tribunal appello (‘I lodge my appeal at your tribunal, Lord,’ Στο δικαστήριό σου ασκώ έφεση, ω Kύριε).

When the Church of Greece condemned him in 1955 and anathematised him, his response was prompt and clear: ‘You gave me a curse, Holy fathers, I give you a blessing: may your conscience be as clear as mine and may you be as moral and religious as I.’ (‘Μου δώσατε μια κατάρα, Άγιοι πατέρες, σας δίνω κι εγώ μια ευχή: Σας εύχομαι να ‘ναι η συνείδηση σας τόσο καθαρή, όσο είναι η δική μου και να ‘στε τόσο ηθικοί και θρήσκοι όσο είμαι εγώ.’)

When Kazantzakis died 60 years ago, he was denied church ceremonies in Athens. But when his body was flown to Crete by Aristotle Onassis, he lay in state in Aghios Minas Cathedral in Iraklion. His funeral took place on 5 November 1957, and a priest officiated at the burial, giving lie to the oft-repeated claims that Kazantzakis had died an excommunicate and was buried without the rites of the Church.

His epitaph on his grave on the walls above Iraklion reads: ‘I hope for nothing. I fear nothing. I am free’ (Δεν ελπίζω τίποτα. Δε φοβούμαι τίποτα. Είμαι λέφτερος). In the fuller version, Kazantzakis writes: ‘I do not hope for anything. I do not fear anything, I have freed myself from both the mind and the heart, I have mounted much higher, I am free’ (Δεν ελπίζω τίποτα, δεν φοβούμαι τίποτα, λυτρώθηκα από το νου κι από την καρδιά, ανέβηκα πιο πάνω, είμαι λεύτερος).

But if Saint Minas is the patron saint of Iraklion, surrounded by so many legends and honoured in the name to the city cathedral, why is the name Minas so rare in Iraklion?

An old story says that during the Turkish occupation of Crete, illegitimate children were often left on the steps of the Church of Saint Minas. The church took care of the children and named the boys Minas in honour of the saint at whose church they had been left.

For many years it was believed in Iraklion that the name Minas indicated that a man had been born outside marriage, and so for generations people would not give the name of the city’s patron to boys born in Iraklion for fear of stigma.

Today, Aghios Minas is one of the largest cathedrals in Greece, with a capacity of 8,000 people. 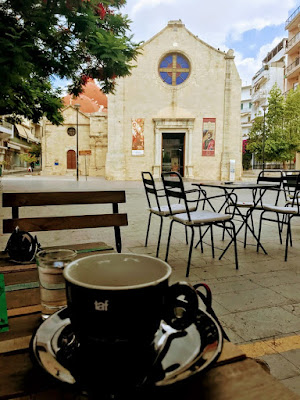 Sipping coffee in the square beneath the Cathedral of Saint Minas, in front of the Museum of Christian Art and the Church of Saint Catherine of Mount Sinai (Photograph: Patrick Comerford, 2017)