Does Brexit bring hope for
the Parthenon Marbles
returning to Athens? 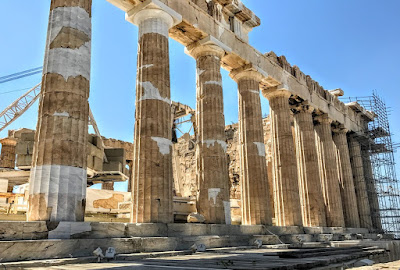 The Parthenon in Athens … half the frieze is still in the British Museum in London (Photograph: Patrick Comerford, 2017)

I spent time yesterday [10 October 2017] putting the finishing touches to my monthly column for two church magazines, the the Church Review (Dublin and Glendalough) and the Diocesan Magazine (Cashel, Ferns and Ossory).

In my column next month [November 2017], I am describing my visit to the Ac ropolis in Athens and the new Acropolis Museum in August.

The new Acropolis Museum is the best Greek answer to British refusals to return the Parthenon Marbles to Athens from the British Museum in London.

But is Brexit going to have any impact on either the Greek demands or the persistent British refusals?

Last week, when President Prokopis Pavlopoulos of Greece met a delegation from the Ionian Islands that briefed him on an initiative for the repatriation of all elements of culture around the world and asked for his support.

During those talks last Friday, President Pavlopoulos said Greece’s first priority is the return of the Parthenon Marbles. ‘There is no other monument in the world that broadcasts these symbolisms,’ he said.

Greece is threatening to sue Britain for the return of the Elgin Marbles, which it says are stolen property.

Two years ago, the newly-elected government of Alexis Tsipras turned its back on the recommendation of a London-based team of human rights lawyers acting for Athens, including Amal Clooney, to help to settle the decades-old dispute.

But the Greek Minister of Culture, Lydia Koniordou, told The Times of London in a recent interview: ‘Greece is determined to break the deadlock caused by the continuous refusal by the British government to return the Parthenon sculptures to their country of origin. We are using both diplomatic channels and alternative means … without excluding the use of judicial means.’

About half the frieze, many metopes, and half of the pediment statues are now in the new Acropolis Museum in Athens. But most of rest are in the British Museum in London, with other parts scattered across Europe in other museums, including the Louvre and the Vatican.

The committee is chaired by Alexis Mantheakis, who seems to agree with the suggestion from the legal advisers that sculptures could be traded for the Greek parliament’s ‘Yes’ to Brexit when the EU asks the parliament of each 27 member states to consent to the Brexit terms when they are agreed with Brussels.

It seems Scandinavian countries are prepared to say ‘yes’ only in exchange for new rules on fishing in the North Sea. There is a prosecco war is on between Italy and Britain. And Spain is claiming sovereignty over the Strait of Gibraltar. So why should Greece not make its own demands?

‘Here’s the solution we’ve been looking for for decades!’ Mantheakis told the Athens newspaper Kathimerini earlier this summer [7 August].

‘This is the first chance we have to claim the return of the marbles with the support of international diplomacy. We will tell them – gentlemen, we support you; the only thing we ask for is to empty a room in your museum.’

The Greek government has argued that EU mediators negotiating with Britain should protect Europe’s cultural identity, symbolised by the of the Parthenon marbles, pointing out that Athens is the cradle of Western civilisation.

The British Museum replied: ‘The Acropolis Museum allows the Parthenon marbles to be admired against the background of Athenian history. The sculptures displayed in London are important representatives of ancient Greek civilisation in world history.’

At a recent match in Cyprus between Tottenham Hotspur and Apoel Nicosia, Greek-Cypriot fans unfurled two banners proclaiming: ‘History Cannot Be Stolen’ and ‘Bring The Marbles Back.’

Recently, TripAdvisor invited travellers and tourists to rank the ten most attractive museums in the world. The Metropolitan in New York heads the list, the Acropolis Museum in Athens is in eighth place … and the British Museum in London does not appear on the list.