Taking the message of
Saint Patrick to heart 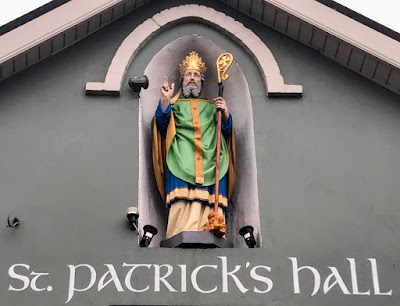 Saint Patrick’s Day is a good day for parades and parties, for trying to show each other we have a cúpla focal, for singing a few hymns and songs in Irish, and for breaking our Lenten fasts and forgetting our Lenten resolutions.

I am still a relative newcomer, I think, so I am delighted to have been invited once again this year to be on the reviewing platform at the Saint Patrick’s Day Parade later this afternoon here is Askeaton.

But when we consider the long run of Christian history over 2,000 years, Saint Patrick’s Day is a reasonably late innovation, dating from only the 17th century, and has only been a public holiday in Ireland since 1903. Indeed, the first Saint Patrick’s Day parade in Dublin was not held until 1931.

But then, it is a great Irish tradition to invent traditions.

When it comes to Saint Patrick’s Day sermons, particularly if they are preached by a priest called Patrick, we may get a lot of silly talk about shamrocks, slavery and snakes, if not shillelaghs.

We help to massage those myths and legends in our churches and cathedrals with stained glass windows depicting Saint Patrick with mitre and crozier, standing on the head of a snake.

But, rather than trying to diminish or even demolish the Patrick myth, before we go out to indulge in the revelries on the streets today, could we just indulge ourselves a little this morning by trying to engage with the real Saint Patrick and by asking how he is relevant to today’s burning issues on the streets?

1, Saint Patrick was not an Irishman. It might be an anachronism – or more correctly a prochronism – to describe him as such, but you can get my point when I say Saint Patrick was an Englishman. We like to think of Christianity being brought from Ireland to Europe in the Dark Ages. But Saint Patrick came from a Christian society that had arrived in our neighbouring island generations beforehand with the Romans.

Perhaps, in these dark days of Brexit, we could benefit from a little more kindness in our attitude to Anglo-Irish relations. Certainly, Saint Patrick’s family background should put to shame those in Ireland who still use denigrating and derogatory phrases such as ‘Brits’ that smack of racism. Saint Patrick reminds us that being English and being Irish is about as close as you can get in nationalities.

Our first reading this morning [Tobit 13: 1b-7] is a reminder that the good news of God’s kingdom is not for one, confined or limited group of people, but for all nations, throughout all ages.

2, Saint Patrick did not teach about the Trinity using the shamrock. That is legend. And if he did use the shamrock, he was perilously close to heresy. When we see one leaf, we do not see the whole shamrock, when we see two leaves we do not see the whole shamrock. The Father is fully God, the Son is fully God, the Holy Spirit is fully God, but they do not work independently of each other, and cannot be torn apart and shredded, or held up as one God, each on their own like little idols or totems.

But the Trinitarian challenge from Saint Patrick warns us of the danger of making our own gods, in our own image and likeness, rather than entering into a relationship with the God who makes us in God’s image and likeness.

What or who are our idols today?

Did we destroy our economy some years ago because we made little gods of our money, our banking system and our quest for growth that benefitted a few at the expense of the many?

3, Saint Patrick did not expel the snakes from Ireland. The incident is not mentioned by Saint Patrick in his own writings and does not appear in the stories about him until the 11th century. But, in the building of the nation myths, Saint Patrick was seen to need a legend parallel to Saint George slaying the dragon and Saint Marcel delivering Paris from the monster.

Saint Paul in our epistle reading calls on us to renounce the shameful things and to turn our backs on cunning practices, to be conscientious and truthful [II Corinthians 4: 2].

But what snakes and dragons and shameful things do you want to see expelled from Ireland?

The greed that fed the Celtic Tiger? The decisions that leave hundreds on hospital trolleys every day? The funding priorities that mean access to housing education and health care are still based on ability to pay rather than need or potential?

That racism that so discriminates against foreigners and refugees that it would be happy to have a present-day Patrick work in oppressive conditions that would be today’s equivalent of the slopes of Slemish, or place him in direct provision centres?

Saint Patrick is said to have brought Christianity to Ireland. But do our public priorities indicate we still take it to heart?

The first reading this morning reminds us that we are all children of exile and calls on us to turn to God ‘with all your heart, and with all your soul’ [Tobit 13: 6].

4, Saint Patrick was not the first person to bring Christianity to Ireland. The legends about Saint Declan of Ardmore, Saint Ciaran of Seir Kieran, Saint Ailbe of Emly, Saint Ibar of Wexford, and so on, bringing Christianity to many parts of the southern half of Ireland, may be nothing more than legend.

But underpinning them is a truth that Christianity was here in Ireland for generations before Saint Patrick arrived. His role was as a co-ordinator and as a figure of unity – as bishops should be – to reap what others had sown, but that sower and reaper could rejoice together in a shared Irish Christianity, in one church together [see John 4: 35-38].

Are we still committed to bringing Christianity together, to the visible unity of the Church?

Or, are the lines we are going to say in the Creed in a few moments, ‘we believe in one, holy, catholic and apostolic Church,’ just another tradition, something we are committed to but not willing to do very much about?

Legends apart, let me summarise some of the positive things about Saint Patrick that have been underlying his story.

Saint Patrick was enthusiastic about sharing the Christian message. If I said that the Christian message is not at the heart of the festivities in Ireland today, you might rightly tick me off for being a killjoy. But we are less than joyful and increasingly reticent about sharing our faith in the marketplace today … something for which the disciples themselves are admonished in this morning’s Gospel reading [see John 4: 34-38].

Saint Patrick was a unifying force for the varying strands of Christianity in Ireland. That was why he was sent on his mission to Ireland. But so often every one of the Churches in Ireland is so insecure in its identity, that we cling too often to the little things that make us different instead of rejoicing in the truly important things that we have in common.

Saint Patrick knew what economic and social oppression were from an early stage in his life. Saint Patrick challenged the established order of the day. Yet he too was afflicted but not crushed, perplexed but not driven to despair, persecuted but not forsaken, struck down but not destroyed, to quote from Saint Paul’s words this morning [see I Corinthians 4: 8-9].

Like Christ with the Samaritan woman at the well, who provides the context and the setting for this morning’s Gospel reading [John 4: 31-38, see John 4: 1-42 for the full context], Saint Patrick was affirmative of the women who came to him with their questions about religion, but who had been marginalised and who had been kept out of religious society and debate. Indeed, so affirmative was Saint Patrick that his detractors accused him of being beguiled by them.

As the son of a deacon and the grandson of a priest, Saint Patrick could hardly uphold the rigours of clerical celibacy, or for that matter some of our moralising and negatively judgmental attitudes towards sexuality and gender today.

Saint Patrick is a pastorally sensitive and healing figure. And I pray and I hope too we can continue to follow in the footsteps of Saint Patrick, the real Saint Patrick.

This sermon was prepared for Saint Patrick’s Day, 17 March 2018.