A day in London with USPG
talking about Anglican mission 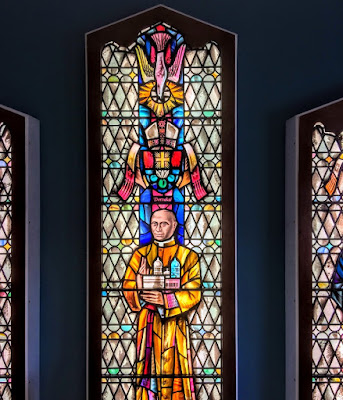 A stained-glass window in the USPG offices in London (Photograph: Patrick Comerford)

I am in London today [9 May 2018] for a full-day meeting of the Trustees of the Anglican mission agency, USPG (United Society, Partners in the Gospel).

These are exciting times for USPG, with a new chair, John Neilson, about to take office at the USPG conference in July, and a new general secretary, the Revd Duncan Dormor, already in office.

Recently, Duncan Dormor took part in the World Conference on Mission and Evangelism, which was organised in Arusha, Tanzania, last month by the World Council of Churches.

In his reflections on the conference, he wrote: ‘Again and again, this theme emerged powerfully in Arusha: that the poor and the marginalised are not mute and invisible; are not simply beneficiaries (and certainly not objects of sympathy, pity or charity), but rather transformative agents of change.’

He continued: ‘The Patriarch of Antioch and of the Universal Syrian Orthodox Church, Mar Ignatius Aphrem II … spoke movingly of a range of relief and development initiatives throughout Syria and Iraq that would primarily benefit the majority Muslim population, alongside some Christians.

‘Indeed, it is those on the margins, who in articulating stories of hope and transformation in the midst of struggle are often most capable of speaking the language of prophetic discipleship; of bringing the most powerful articulation to the “Nazarene manifesto” (Luke 4: 16-20). And indeed, to deny the agency of such discipleship through continued, unreflective paternalism is to perpetuate the injurious wounds of those colonial encounters that “wrote off” whole cultures as “savage” or “barbaric”.

‘The challenge in hearing of a mission from the margins does not lie with the voice, but rather with the hearing.’

One of the interesting events in my diary in a few weeks’ time is USPG’s annual conference, which takes place in the High Leigh Conference Centre near Hoddesdon, Hertfordshire, from 2 to 4 July.

With workshops and speakers from throughout the world church, this annual conference is also an opportunity to explore how parishes and churches can play their part in tackling poverty, fighting inequality, campaigning for climate justice, and much more.

The speakers at this year’s conference include:

● Archbishop Albert Chama, Archbishop and Primate of the Church of the Province of Central Africa

● The Right Revd Donald Jute, Bishop of the Diocese of Kuching

The Bible studies are being led by the Revd Bonnie Evans-Hills, an Anglican priest and Peace and Interfaith activist. She is the Rector of Kimpton with Ayot Saint Lawrence in the Diocese of St Albans and has wide experience in local, national and international dialogue and reconciliation in the Church of England and the Anglican Communion.

She trained for ordination at Westcott House, Cambridge, and has studied Pastoral Theology at Heythrop College, London. She has worked with the UK Coalition for Prevention of Genocide, a UN-backed initiative engaging with preventing xenophobia and radicalisation, and providing positive response to refugees.

The conference is free for students, ordinands, USPG Diocesan Representatives, volunteer speakers, and Journey With Us participants. Bookings for the conference can be made through the USPG website.

A session for USPG volunteers takes place on Monday afternoon (2 to 4 p.m.) before the conference officially starts. 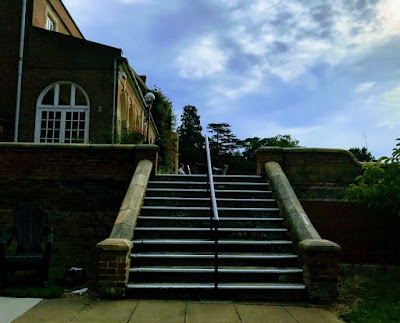 At the High Leigh Conference Centre … the venue for this year’s USPG conference (Photograph: Patrick Comerford)