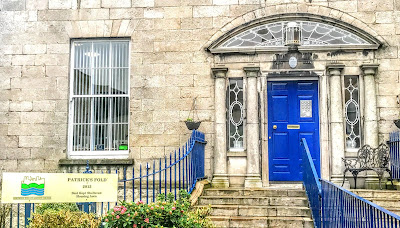 Walking to and from the General Synod of the Church of Ireland each day, walking between the Charlemont Arms Hotel and the City of Armagh Hotel, I passed along English Street and Scotch Street and by Patrick’s Fold, which is said to stand on the site of Saint Patrick’s first church in Armagh.

In early rentals Scotch Street was known as Ferta Street, which was derived from the Irish Teampail na Ferta, said to be Saint Patrick’s first church in Armagh.

At one time, this street was also known as Newry Street, as this was the main route out of Armagh to the south-east.

The name Scotch Street, which also appears as Scottish Street in 1661, probably derives from the number of settlers from Scotland who lived in this area by the mid-17th century.

Today, the buildings lining Scotch Street are all shop premises, with the visible and noticeable exception of Patrick’s Fold, which is set back from the street front, with a colourful garden at the front with two lawns.

Patrick’s Fold, formerly the Bank of Ireland, is said to stand on the site of Saint Patrick’s Teampail na Ferta.

The house was built in 1811-1812 and was designed by Francis Johnson as part of Leonard Dobbin’s planned commercial development. At the time, Dobbin was the Sovereign or Mayor of Armagh, and the agent for the Bank of Ireland. Later, he was MP for Armagh from 1833 to 1838.

This is a very handsome three-bay, three-storey house with a basement. It is built in ashlar stonework, with blocked, chamfered quoins, a fine cornice and a blocking course. At either side there are screen walls with doorways, each with an oculus over the door. There are sash windows with glazing bars and gabled, stone chimney stacks.

The house has a splendid doorway with sidelights, four engaged Tuscan columns and a segmented fanlight with an integral lantern. The flight of steps leading up to the doorway fans out at each side, with railings to the basement area.

The side walls of the adjoining houses form part of the composition, and there are finely carved urns adorning the gables.

The building was converted by GP and RH Bell in 1979-1981 for sheltered accommodation and it is well maintained. In 2013, it was named as ‘Best-Kept Sheltered Housing Area.’ 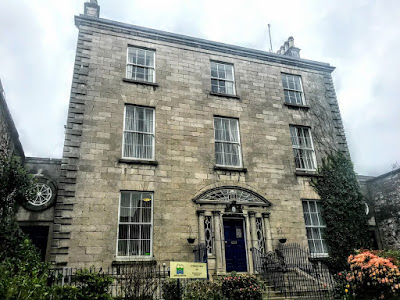