Ennistymon or Ennistimon,
Lahinch or Lehinch, ‘are
ye right there Michael?’ 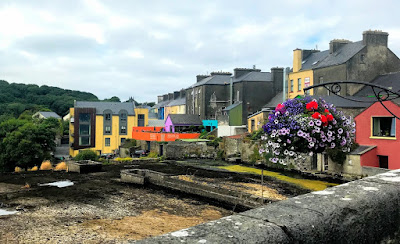 The Bridge in Ennistymon looks down on the River Inagh and the cascades below (Photograph: Patrick Comerford, 2018)

On our journey through the Burren on Saturday afternoon, six of us passed through a number of pretty towns and villages in Co Clare, including Ennistymon, Lahinch, Ballyvaughan, Doolin, Corofin and Kilfenora.

On a bright, sunny, summer’s afternoon, one was as bright and colourful as the next, sometimes with colours that were reminiscent of towns and villages in Tuscany under Italian summer sunshine.

Ennistymon, a market town built on the borders of the Burren and on the banks of the River Cullenagh or River Inagh, combines scenic, natural beauty with old world charm and many traditional pubs.

The narrow street near the bridge over the Cullenagh River is the oldest part of the town. Behind the Main Street and a little below the seven-arch bridge, built in 1790, the river with its small rapids rushes over an extensive ridge of rocks, creating a beautiful cascade.

The official name of Ennistymon is Ennistimon, although the spelling Ennistymon is used most widely, and historically it was spelled Inishdymon.

The oldest part of town is the narrow street near the bridge. Ennistymon grew from just three cabins in 1775 to 120 houses in 1810. The Falls Hotel, formerly Ennistymon House, is a Georgian house built ca 1760 on the site of an earlier castle.

A mile outside Ennistymon, the ‘An Gorta Mór’ Memorial near Ennistymon Hospital, stands in the grounds of the old local workhouse, and remembers the Great Famine of 1845-1850.

The West Clare Railway once passed through Ennistymon, connecting the town with Ennis and with towns and villages on the West Coast of Clare. The railway station opened on 2 July 1887, but closed on 1 February 1961.

The Tower of Dough Castle on the golf course and the long sandy beach at Lahinch (Photograph: Patrick Comerford, 2018; click on image for full-screen vfiew)

Earlier that afternoon, we drove through Lahinch, a small resort close to the head of Liscannor Bay. Lahinch is beside a 2 km long beach of golden sands on the north-west coast of Co Clare, between Milltown Malbay and Ennistymon.

The shape of the resort creates Atlantic breakers that attract surfing and canoeing enthusiasts from all over the world and Lahinch has earned a reputation as a top ‘surf centre.’ It is also a centre for sailing, swimming, kite surfing, skin-diving, and deep-sea and fresh water fishing, and is known for its 18-hole world championship course at Lahinch Golf Club.

The marshes north of the town are home to a wide variety of terrestrial, freshwater and marine birds.

Lahinch is said to take its name from the Irish An Leacht or Leacht Uí Chonchubhair, meaning ‘The Memorial Cairn of O’Connor.’ Another version of the name in Irish, found in the Annals of the Four Masters, is Leath Inse, meaning ‘half island’ or peninsula, which describes the location of the village between the Inagh River and the sea.

In the Middle Ages, the O’Brien clan dominated the coastline. Liscannor Castle and Dough Castle are now ruins. The tower of Dough Castle stands on the golf course, and O’Brien’s Bridge across the Inagh River is in the vicinity.

As late as the 18th century, Lahinch was still a small hamlet with only a few fishermen’s huts. It grew in the 19th century to over 1000 people by 1835, but it was not until later in the century that the infrastructure of the town developed and it became a seaside resort with the opening of the West Clare Railway in 1887.

In 1883, the town was struck by a severe storm that destroyed the sea wall and promenade and damaged many buildings. Local governor William Edward Ellis oversaw the repair work that followed, and the construction of a new sea wall and promenade was inaugurated by Lady Aberdeen, wife of the Lord Lieutenant of Ireland.

The West Clare Railway closed in 1961, but Lahinch retains its popularity and in recent years has become a renowned surfing location.

Although the town has been known as Lahinch since the 1850s, in recent years many of the road signs were erected in the area, changing the spelling to Lehinch.

The name change began when the National Roads Authority – now the Transport Authority Ireland – took responsibility for road signs. The NRA asked the county council to put together a Place Names Commission so that it could correct misspellings and typos in the area, and Lahinch, Ennistymon and Corofin became Lehinch, Ennistimon and Corrofin.

Now these three towns in Co Clare want local plebiscites to correct the misspelling of their names on all official since 2011. Local groups have started the legal process of changing the names of their towns.

Local people in Lahinch took matters into their own hands, correcting the spelling on a number of signs.

Ennistymon and Lahinch both mentioned in some versions of Percy French’s song ‘Are Ye Right There Michael.’ The song, written by Percy French (1854-1902) in 1902 and parodying the state of the West Clare Railway, was inspired by an actual train journey in 1896.

Because of a slow train and the driver stopped for no apparent reason, French, though who had left Sligo in the early morning, arrived so late for an 8 pm recital that the audience had left. The ballad caused considerable embarrassment to the rail company, which was mocked in music halls throughout Ireland and Britain.

The company took a libel action against French. When French arrived late for the libel hearing, the judge chided him on his lateness. French reportedly responded, ‘Your honour, I travelled by the West Clare Railway,’ resulting in the case being thrown out.

You may talk of Columbus’s sailing
Across the Atlantical Sea,
But he never tried to go railing
From Ennis as far as Kilkee.
You run for the train in the morning,
The excursion train starting at eight,
You’re there when the clock gives the warnin’
And there for an hour you’ll wait.
And as you’re waiting in the train
You’ll hear the guard sing this refrain:

Are ye right there, Michael, are ye right?
Do you think that we'll be there before the night?
Ye’ve been so long in startin’
That ye couldn’t say for certain
Still ye might now, Michael
So ye might!

They find out where the engine’s been hiding
And it drags you to sweet Corofin.
Says the guard: ‘Back her down on the siding
There’s a goods from Kilrush coming in.’
Perhaps it comes in two hours,
Perhaps it breaks down on the way
‘If it does,’ says the guard, ‘by the powers
We’re here for the rest of the day!’
And while you sit and curse your luck,
The train backs down into a truck.

Are ye right there, Michael, are ye right?
Have ye got the parcel there for Mrs White?
Ye haven’t, oh begorra
Say it’s comin’ down tomorra
And well it might now, Michael
So it might.

At Lahinch the sea shines like a jewel,
With joy you are ready to shout,
When the stoker cries out: ‘There’s no fuel
And the fire’s tee-totally out!
But hand up that bit of a log there
I’ll soon have ye out of the fix
There’s a fine clamp of turf in the bog there
And the rest go a-gatherin’ sticks.’
And while you’re breakin’ bits of trees,
You hear some wise remarks like these:

A popular version of the song recorded by the Irish tenor Brendan O’Dowda (1925-2002) adds the following lyrics that may or may not have been part of the original:

Kilkee! Oh you never get near it!
You’re in luck if the train brings you back,
For the permanent way is so queer
It spends most of its time off the track.
Uphill the old engine is climbin’
While the passengers push with a will
You’re in luck when you reach Ennistymon,
For all the way home is downhill.
And as you’re wobblin’ through the dark
you hear the guard make this remark: