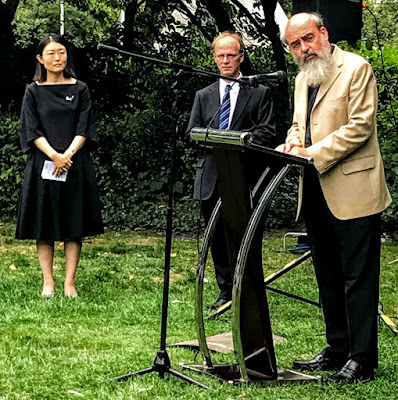 This half-page news report is published on the back page of the ‘Church of Ireland Gazette’ this morning [24 August 2018]. Unfortunately, for some reason, the ‘Gazette’ uses a photograph from two years [2016] and not from this year’s event.

The following is an abridged version of the address given by Canon Patrick Comerford, president of the Irish Campaign for Nuclear Disarmament (Irish CND), at the annual Hiroshima Day commemoration in Dublin on 6th August.

We are living in fear-filled and awesome times. According to the ‘Bulletin of the Atomic Scientists’ earlier this year, the Doomsday Clock now stands at two minutes to midnight. What can we do? Where are the signs of hope?

Fifty years ago, on 1st July 1968, the Nuclear Non-Proliferation Treaty (NPT) was signed in Moscow, London and Washington. The NPT process was launched 60 years ago in 1958 by Frank Aiken, then the Irish Minister for External Affairs.

The hope was that this treaty would stop the spread of nuclear weapons and weapon technology, eventually achieving nuclear disarmament and general and complete disarmament. The treaty came into force in 1970, and it was extended permanently in 1995. Over time, more countries have adhered to the NPT than any other arms treaty.

When the NPT was first proposed, the fear was we would have 25 to 30 nuclear weapon states within 20 years. Instead, only nine states are believed to have nuclear weapons today.

Of course, we know the NPT cannot stop the proliferation of nuclear weapons. It has, to a degree, stopped horizontal proliferation, but the five big nuclear states still have 22,000 warheads in their stockpiles. Furthermore, they show no signs of wanting to get rid of their nuclear armouries.

Likewise, five UN member states remain outside the ambit of the NPT: India, Israel, and Pakistan have their own nuclear weapons, South Sudan still has to sign up, and North Korea has withdrawn.

Today, Ireland, once again is to the forefront, promoting the Treaty on the Prohibition of Nuclear Weapons, or the Nuclear Weapon Ban Treaty. This is the first legally-binding international agreement to comprehensively prohibit nuclear weapons. Its goal is their total elimination and it was passed on 7th July 2017.

In order to come into effect, it now needs the signature and ratification of at least 50 countries. The treaty was signed by Ireland on 20th September 2017.

Once this treaty enters into force, there will be a clear international prohibition on acquiring, stockpiling and sharing nuclear weapons, which was a major short-falling in Article VI of the NPT.

There are signs of this already in some NATO states, and we have already seen the impact of the Ottawa Convention on landmines. Already, 14 states have ratified the Treaty on the Prohibition of Nuclear Weapons, and this is quite good going in less than a year.

We may be living just two minutes from midnight. But there is still time to push the clock back. As Dr Rachel Bronson said: “It is urgent that, collectively, we put in the work necessary to produce a 2019 Clock statement that rewinds the Doomsday Clock. Get engaged, get involved, and help create that future. The time is now.” 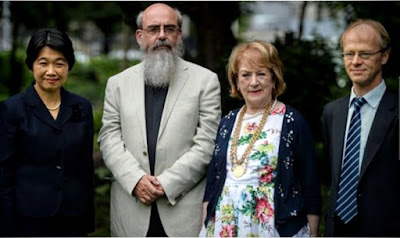