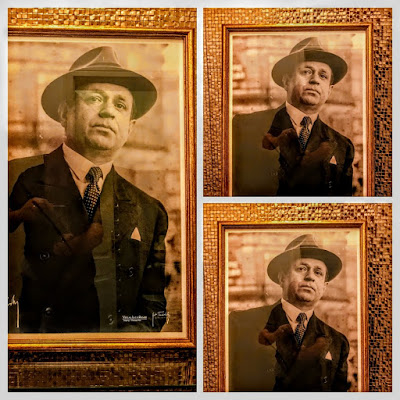 Kurt Tucholsky (1890-1935), one of the early victims of Hitler and the Nazis … best-known for his cabaret songs (Photo collage: Patrick Comerford, 2018)

Every time I walk in or out of this apartment in Tucholskystraße, a framed photograph in the corridor reminds me that this street in Berlin is named in honour of the German Jewish journalist, satirist, and writer, Kurt Tucholsky (1890-1935), who was one of the early victims of Hitler and the Nazi regime and who is best-known for his cabaret songs.

Kurt Tucholsky was born on 9 January 1890 at his parents’ home, a walking distance west of here, at 13 Lübecker Straße in Berlin-Moabit. His father, Alex Tucholsky, was a Jewish bank cashier who had married his cousin Doris Tucholski in 1887 and they had three children: Kurt, the eldest, Fritz and Ellen.

Alex Tucholsky was transferred by the bank to Stettin, now in Poland, and Kurt Tucholsky spent his early childhood there until he family returned to Berlin in 1899.

Alex Tucholsky died in 1905, while Kurt was still in his teens, and left a considerable fortune to his wife and children.

While he was still at school, Kurt Tucholsky wrote his first articles as a journalist. In 1907, the weekly satirical magazine Ulk (‘Prank’) published a short feature, ‘Märchen’ (‘Fairy Tale’), in which the 17-year-old Tucholsky made fun of Kaiser Wilhelm II’s cultural tastes.

After his Abitur examinations in 1909, Tucholsky began studying law in Berlin that October, and spent his second semester in Geneva in early 1910.

As a student, Tucholsky’s main interest was literature. He wrote more intensely as a journalist, including writing for the Social Democratic Party newspaper Vorwärts (‘Onwards’), and he was involved in the SPD’s election campaign in 1911.

He travelled to Prague with his friend Kurt Szafranski in September 1911 to meet his favourite author, Max Brod, who introduced Tucholsky to his friend and fellow author Franz Kafka.

Tucholsky completed a doctorate later, but never went on to a legal career: his inclination towards literature and journalism was stronger.

The following year, Tucholsky reached a wider audience with the publication in 1912 of Rheinsberg – ein Bilderbuch für Verliebte (Rheinsberg – a Picture Book for Lovers), a tale in which he adopted a fresh and playful tone and which was illustrated by Szafranski.

To support the sales of the book, the two friends opened a ‘Book Bar’ on Kurfürstendamm in Berlin: anyone who bought a copy of his book received a free glass of schnapps. It was seen as a student prank and came to an end after a few weeks.

Tucholsky began an enduring and productive new phase as a journalist in January 1913 when he published his first article in the weekly theatre magazine Die Schaubühne, later called Die Weltbühne.

The publisher of the magazine, Siegfried Jacobsohn, became Tucholsky’s friend and mentor, offering him both encouragement and criticism, sometimes co-writing articles with him, and gradually inviting him to assume some editorial responsibility for Die Schaubühne.

His early career in journalism was interrupted with the outbreak of World War I in 1914, and for over two years he published no articles. Meanwhile, he finished his studies at the University of Jena in Thuringia in early 1915, when he received his doctorate in law with a work on mortgage law.

By April 1915, he had been conscripted, and he was sent to the Eastern Front, where he was a munitions soldier and then as company writer. From November 1916 on, he published the field newspaper Der Flieger. At this time, he also got to know Mary Gerold, and they later married.

Tucholsky saw his role as a writer and field-newspaper editor as good opportunities to avoid serving in the trenches. Looking back, he wrote: ‘For three and a half years I dodged the war as much as I could – and I regret not having had the courage shown by the great Karl Liebknecht to say No and refuse to serve in the military. Of this I am ashamed. I used many means not to get shot and not to shoot – not once the worst means. But I would have used all means, all without exception, had I been forced to do so: I wouldn’t have said no to bribery or any other punishable acts. Many did just the same.’

A meeting with the jurist Erich Danehl resulted in him being posted to Romania in 1918 as a deputy sergeant and field police inspector. Danehl later appeared in his writings as ‘Karlchen,’ In Romania, Tucholsky converted to Lutheranism and he was baptised In Turnu Severin in the summer of 1918. He returned from the war that autumn as a convinced anti-militarist and pacifist.

Meanwhile, through Tucholsky’s influence, the focus of Die Schaubühne shifted to politics. It changed its name to Die Weltbühne: Zeitschrift für Politik, Kunst, Wirtschaft, The World Stage: Magazine for Politics, Art, Economics, in 1918, and it became the voice of the intellectual left in Berlin.

As a politically engaged journalist and co-editor of Die Weltbühne, Tucholsky became a social critic in the tradition of Heinrich Heine.

In December 1918, Tucholsky became editor-in-chief of Ulk, the weekly satirical supplement of Berliner Tageblatt, published by the left-leaning liberal Rudolf Mosse, and he remained there until April 1920.

Tucholsky moved to Paris in 1924 and then to Sweden in 1929. He who also wrote under the pen names Kaspar Hauser, Peter Panter, Theobald Tiger and Ignaz Wrobel. His picture book Deutschland über alles (1929) was written with John Heartfield, he published a second novel, Castle Gripsholm, in 1931, and he also contributed that year to Rote Signale (‘Red Signals’), a collection of poetry.

Tucholsky was one of the most important journalists of the Weimar Republic. He was simultaneously a satirist, an author of satirical political revues, a songwriter and a poet. He saw himself as a left-wing democrat and pacifist and warned against anti-democratic tendencies – above all in politics, the military and justice – and the threat of Nazism.

His output included aphorisms, book and drama reviews, light verse, short stories, and witty satirical essays in which he criticised German militarism and nationalism and the dehumanising forces of the modern age. His poetry was set to music and performed widely in German cabarets.

His fears were confirmed when the Nazis came to power in January 1933. The last edition of Die Weltbühne was published on 7 March 1933. He was one of the first German writers whose works were banned in May 1933 as ‘un-German’ and burned. He was also one of the first writers and intellectuals whose German citizenship was revoked by the Nazis.

Weakened by chronic illness, on the evening of 20 December 1935 Tucholsky took an overdose of sleeping tablets in his house in Hindås, about 35 km east of Gothenburg. He was found in a coma the following day and was taken to hospital in Gothenburg, where he died there on the evening of 21 December 1935. Recently, Tucholsky’s biographer, Michael Hepp, has questioned the verdict of suicide, saying it is possible that his death was accidental.

Harry Zohn, who recently published Germany? Germany! Satirical Writings: The Kurt Tucholsky Reader, a collection of 65 short essays written between 1907 to 1932, describes Tucholsky as ‘the heckling voice in the gallery, and the conscience of Germany.’

In a review of Zohn’s book in the Los Angeles Review of Books last year, Franz Baumann a former UN assistant secretary-general and UN special adviser on Environment and Peace Operations, says it invites readers ‘to reflect on disturbing parallels between Weimar Germany and the politics of 21st-century Western states, for instance: the success of populists; the unbridgeable gap between the “deplorables” and intellectuals writing in elite publications; and the failure of the political left to translate analysis into winning tactics.’ 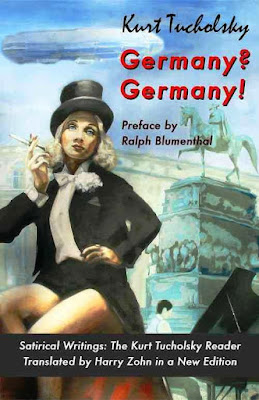 It is well for us to remember, learn and be aware of these earlier historical figures such as Tucholsky who acted as a conscience for their country and wrote and/or reported on "dehumanizing forces" as you mentioned in your blog. I live in the U.S.A. and never have I been more proud of our free press... and fearful of its demise through the actions of those who seek power over justice, and false information over the truth. Thank you for this post. Thank you Kurt Tucholsky. Thank you journalists who report truth and fact.