Lifting the Sam Maguire Cup
at celebrations in Co Limerick 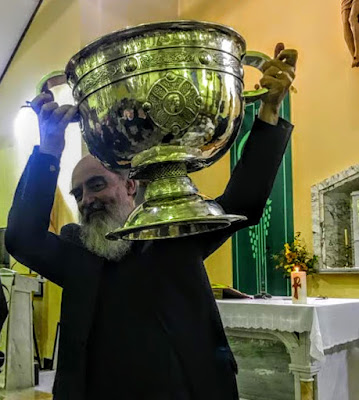 The Liam MacCarthy Cup came to Limerick last month when Limerick won the All-Ireland Hurling Final on 16 August, defeating Galway 3-16 to 2-18. But the Sam Maguire Cup came to Co Limerick last night [21 September 2018] to open the celebrations in Ardagh marking the 150th anniversary of the discovery of the Ardagh Chalice.

Kildare was the first county to win the Sam Maguire Cup in 1928 by defeating Cavan 2-6 to 2-5. The original trophy was retired 30 years ago in 1988 because it had received some damage over the years. The GAA commissioned a replica from the Kilkenny-based silversmith Desmond A. Byrne and the replica trophy has been used ever since.

The original Sam Maguire Cup is permanently on display in the GAA’s museum at Croke Park.

The Sam Maguire Cup, and other replicas of the Ardagh Chalice – including one in the Hunt Museum and one in the family of the Earls of Dunraven – were in Saint Molua’s Church, Ardagh, for a concelebrated Mass last night, and at a history seminar in Ardagh Community Centre.

The Ardagh Chalice and the Ardagh Hoard, which were found in West Limerick 150 years ago, make up one of the most significant archaeological finds in Ireland in the 19th century.

As Dr Raghnall O Floinn, former director of the National Museum of Ireland, and Dr Cathy Swift of Mary Immaculate College, Limerick, told last night’s seminar, the Ardagh Chalice is one of the greatest treasures of the early Irish Church. It represents a high point in early mediaeval craftsmanship and its craftsmanship can be compared with the Tara Brooch and the Derrynaflan Paten.

The Ardagh Chalice is 17.8 cm high and is 19.5 cm in diameter. The bowl and foot of the chalice are made of beaten, lathe polished silver, and the stem is made of gilt-copper alloy. The outer side of the bowl is decorated with gold filigree granulation, stamped and openwork metal ornaments and multi-coloured enamels and a large, polished rock crystal at the centre.

The chalice is a calix ministerialis, that is one made to administer the Eucharistic wine to the congregation. It was made around the year 725, perhaps in the Shanagolden area. Some 250 elements went into its creation, making it the most famous chalice in the world and certainly the most beautiful.

The festival was opened last night by Minister Pat O’Donovan continues in Ardagh throughout this weekend, with a second round of celebrations next Saturday (29 September 2018). 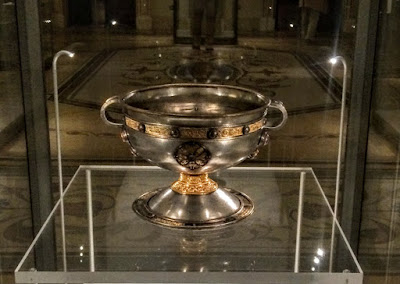