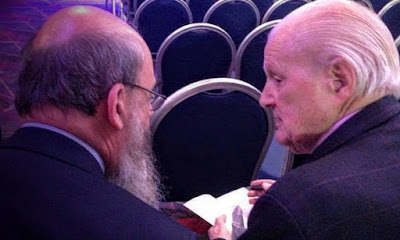 With John Julius Norwich at the Wexford Festival Opera

For my leisure reading in recent weeks, one of the books I have enjoyed is In The Great Cities in Europe by John Julius Norwich, which I bought in Cambridge last month. This book paints a portrait of world civilisation by telling the stories of the world’s greatest cities from ancient times to the present.

John Julius Norwich (John Julius Cooper, 2nd Viscount Norwich) is one of the most distinguished and charismatic writers and broadcasters of our time and he is best-known for his works on the Byzantine empire, mediaeval Sicily and Venice. He has produced 30 historical documentaries for BBC television, and his portraits of cities in this book are vignettes about Constantinople, Palermo and Venice.

I was back in Wexford today [28 October 2016] to hear John Julius Norwich deliver the 2016 Dr Tom Walsh Lecture as part of the Wexford Festival Opera.

It was a self-deprecating hour on stage, as he tried to deny he is an original historian, saying instead he only tries to make what is already known to the general reader.

He has edited the diaries of his father, Duff Cooper, 1st Viscount Norwich, and letters from his famously glamorous mother, Lady Diana Cooper (Darling Monster: The Letters of Lady Diana Cooper to Her Son John Julius Norwich).

A distinguished and popular broadcaster on television and radio he has written and presented some 30 television documentaries on art, architecture and history, and he is fondly remembered for his wit and erudition by listeners to the BBC radio programmes My Word! and Round Britain Quiz.

He has chaired or served on the committees of numerous charitable projects, including projects concerned with Venice, world monuments, fine arts, the disabled, the National Trust and English National Opera. He is a regular speaker at lunches and dinners and in 2006 and 2007 he gave one-man shows in two London theatres.

This morning, in an interview-style presentation on the stage at the Clayton White Hotel, he spoke fondly of Wexford, saying he has been here at least 50 times, coming to the opera festival for the first time in 1961. There were humorous recollections of staying with the Beits at Russborough House in Co Wicklow, late night festival parties in the Talbot Hotel.

John Julius Norwich on the stage in Wexford this morning (Photograph: Patrick Comerford, 2016)

At lunch in the Yard Restaurant in Lower George’s Street, it was good to meet some old friends, including Brendan Howlin and George Lawlor.

Later in the afternoon, two of us also attended Ralph Vaughan Williams’s Riders to the Sea, which is an interesting choice for the festival programme.

Although Vaughan Williams is not often remembered for his contributions to opera, the composer had a life-long interest in bringing music and theatre together. His magnum opus was The Pilgrim’s Progress, a project that occupied him for about 40 years. But many devotees of the composer feel strongly that Riders to the Sea is one of his greatest masterpieces.

It has often struggled to find a home in most opera house planning because of its brevity, but Wexford Festival Opera’s ShortWorks provided an ideal place to listen to this opera, not least because of its Irish roots.

The early 20th century play Riders to the Sea by John Millington Synge is one of Ireland’s few female-focused dramas. Vaughan Williams first composed his one-act opera in 1927, based almost verbatim on Synge’s text. But it was not heard until a decade later, receiving its first performance at the Royal College of Music in London on 1 December 1937.

Music with an eerie, elegiac beauty illuminates the theme of elemental and watery death as experienced by the Aran Islanders, off the Galway and Clare coats. The central role is that of Maurya, who by the end loses her husband and six sons to the sea, experiencing a kind of cathartic release when her last son’s death leaves her with nothing more to fear.

In her director’s notes in the programme, Catriona McLaughlin writes: ‘There is a powerlessness in the face of the sea’s omnivorous ferocity that is curiously embodied in the puny few drops of holy water administered over Bartley’s lifeless body, and yet there is grace and resilience in the faith that this action underwrites. I am repeatedly struck by the ravaged humanity in that gesture; the tiny drops that represent the might of Christ which will bring His hand to their rescue, set against the uncompromising force of nature, the wild sea in all its unknowable danger.’

Realising that the sea can hurt her no longer, Maurya (Lara Harvey) concludes, ‘No man at all can be living for ever, and we must be satisfied.’

All this was evoked by Vaughan Williams in music that captures the flinty harshness of the islands and fierce marine brutality. But the theme of humanity against nature – taken to extremes in his Sinfonia Antarctica – succeeded in bringing out the best in the composer. 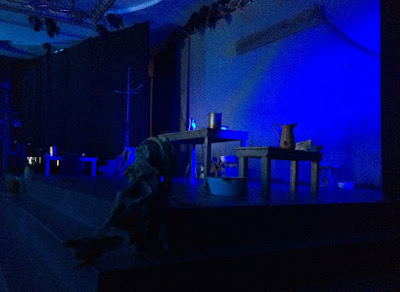 The set for ‘Riders to the Sea’ in Wexford this afternoon (Photograph: Patrick Comerford, 2016)

Posted by Patrick Comerford at 21:13