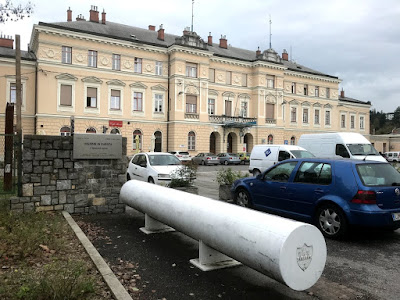 The railway station at the Slovenian side of Transalpina Square, the crossing point between Italy and Slovenia (Photograph: Patrick Comerford, 2018)

I have been in many divided cities: Nicosia in Cyprus remains Europe’s only divided capital city; Berlin has been reunited, but I was still conscious recently of where the border once ran between east and west when I visited the Brandenburg Gate and Checkpoint Charlie; and Strabane and Lifford are really one town, although they are divided between Northern Ireland and the Republic of Ireland, between Tyrone and Donegal.

I spent much of yesterday [7 November 2018] in the divided town of Gorizia, between Gorizia and Nova Gorica, crossing the border between Italy and Slovenia a number of times, travelling in and out of one railway station in Italy, and having lunch in another in Slovenia.

However, it would be just too easy to compare the once divided Gorizia with Berlin during the Cold War. Even at the height of the Cold War, Yugoslavia was technically nonaligned, and Italy and Yugoslavia shared many cultural and sporting events until the break-up of Yugoslavia in 1991.

After that break-up, the frontier dividing Gorizia remained in place until Slovenia became part of the Schengen Agreement on 21 December 2007.

Today, the border between Italy and Slovenia border is almost invisible, an artificial line that runs between Gorizia in Italy and Nova Gorica in Slovenia. There are several border crossings between the two parts of this one city, and two of us walked back and forth across the border, as we walked through various suburban streets yesterday.

The most celebrated crossing of the international border is at Transalpina railway square, but there are other border crossings between Gorizia and Nova Gorica, including Casa Rossa and Rožna Dolina, at Via San Gabriele and Erjavčeva ulica, at Via del Rafut and Pristava, and between San Pietro (Via Vittorio Veneto) and Šempeter pri Gorici (Goriška ulica).

Today, Transalpina Square is an open pedestrian square, dissected by a border that was once fenced. The square was never an official crossing and for decades signboards were in place to stop people from crossing the square from one side to the other.

A crossing point that has become a matter of curiosity since the end of the Cold War and due to Schengen Agreement (Photograph: Patrick Comerford, 2018)

Gorizia is at the foot of the Julian Alps and just two hours by train from Venice. Over the centuries, it has been ruled by the Romans, the Holy Roman Empire, the Venetians, the Habsburgs of Austria, and was a place of refuge for the exiled Bourbon family when they were dethroned in France.

Gorizia stands where the Isonzo and Vipava valleys meet, in a plain overlooked by the Gorizia Hills. Its name comes from the Slovene word gorica, meaning little hill.’ The town first emerged as a watchtower controlling a crossing on the River Isonzo, and was a village near Via Gemina, the Roman road linking Aquileia and Emona, or present-day Ljubljana.

The name Gorizia is first recorded in 1001, when the Holy Roman Emperor Otto III granted the castle and village of Goriza to John II, Patriarch of Aquileia, and Count Verihen Eppenstein of Friuli.

By 1127, Count Meinhard was calling himself Graf von Görz. From the 12th to the early 16th century, the town was the political and administrative centre of an independent county, with a village around the upper castle district and a lower village.

The family of the Counts of Gorizia died out in 1500, and after a short period of rule from Venice in 1508-1509, Gorizia came under the rule of the Austrian Habsburgs. Under Habsburg rule, the town spread out below the castle, and many people moved in to the area from neighbouring parts of northern Italy. Gorizia quickly became a multi-ethnic town where Friulian, Venetian, German and Slovene were spoken.

During the Reformation, the prominent Slovene preacher Primož Trubar visited and preached in Gorizia. By the end of the 16th century, however, the Catholic Counter-Reformation had gained force in Gorizia. Janez Tavčar, who became Bishop of Ljubljana, was instrumental in bringing the Jesuits to Gorizia.

During the Napoleonic era, Gorizia was under French rule in 1809-1813. After the restoration of the Austrian rule, Gorizia became a popular summer residence for the Austrian nobility, and became known as the ‘Austrian Nice.’ When the French Bourbons were deposed in 1830, the last Bourbon king, Charles X, moved to Gorizia.

In mid-19th century, Gorizia had regional autonomy and was a multi-ethnic and tolerant town where Italian, Venetian, Slovene, Friulian and German were all spoken in the streets, and where there was a flourishing cultural life.

The first victim of World War I in Gorizia was Countess Lucy Christalnigg, who was shot on 10 August 1914 by Landsturmer guards while driving her car on a mission for the Austrian Red Cross. Italy entered World War I on 24 May 1915, and the hills west of Gorizia soon became the location of fighting between Italian and Austro-Hungarian troops. Most of its inhabitants of Gorizia were evacuated by early 1916, the Italian army captured Gorizia in August 1916, but the town returned to Austro-Hungarian control at the end of 1917.

At the end of World War I, Gorizia was contested, and it was occupied by Italian troops again in early November 1918. In 1927, Gorizia became a provincial capital.

With the rise of Fascism, many Slovenes fled Gorizia to the Kingdom of Yugoslavia and South America, and the town borders were expanded. Mussolini visited the town twice, in 1938 and 1942. After the Italian armistice in 1943, the town was shortly occupied by Slovene partisans, but then fell to Nazi Germany.

But today the two towns form one conurbation that also includes the Slovenian municipality of Šempeter-Vrtojba. Since May 2011, these three towns are joined in a common trans-border metropolitan zone, administered by a joint administration board.

Borders in Europe have become meaningless. They respect cultural variety and celebrate difference. It is so sad that they could become a point of political argument and dissent that forget the peace that we have worked so hard to build in Europe not only since the end of World War II in 1945, but since the end of World War I 100 years ago in 1918.

A memorial to the victims of the Holocaust at the train station on the Italian side of the town is a reminder that we should never forget the horrors of racism and the destruction that war brings … Dachau, Buchenwald, Auschwitz, Mauthusen, Flossenburg, Ravensbruck, Risiera San Sabba … 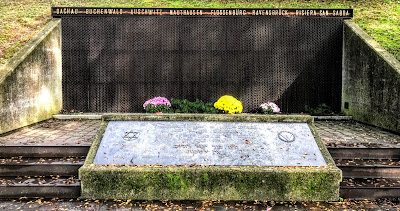