A stroll through the souk
of Tangier, once the haven
of spies and their intrigues

Tangier once had a reputation as a safe haven for spies and their spying activities. It played host nests of spies throughout the Cold War and before that during World War II, and the association of Tangier with spies and their secretive lifestyles has made the city a location for many books and films.

Because of its political neutrality in the mid-20th century, Tangier became a centre for spying and smuggling and attracted foreign capital. During World War II, a British bank in Tangier discovered the first samples of high-quality forged Bank of England banknotes produced by Nazi Germany in ‘Operation Bernhard,’ and US spies used Tangier to plot a landing in the ‘Torch Operation.’ 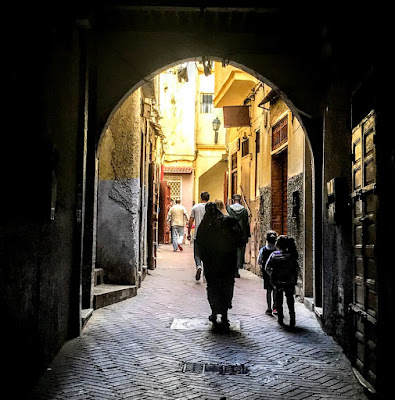 Tangier was a centre of spying and intrigue for centuries (Photograph: Patrick Comerford, 2018)

Tangier stands on the north-west coast Morocco, at the western entrance to the Strait of Gibraltar, where the Mediterranean meets the Atlantic. This too is where Europe and Africa meet, where the Islamic and Christian worlds find the frontier and meeting point of tolerance.

These all combine to give Tangier its unique international flavour. And so, during a brief stay in Seville – before winter began to close in in Ireland – I took the short ferry journey between the ‘Pillars of Hercules,’ from Tarifa in the south of Spain to Tangier on the north African coast. 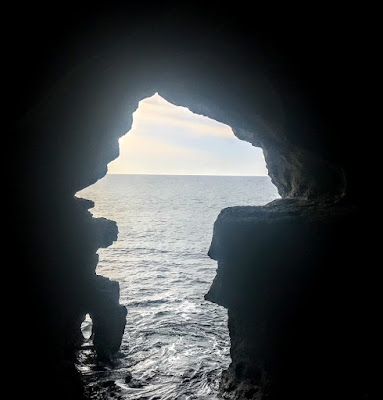 In the Caves of Hercules … Hercules was said to have slept here before completing his Twelve Labours (Photograph: Patrick Comerford, 2018)

‘The Door of Africa’

Because of its location, Tangier is known to Moroccans as Boughaz or ‘the Bride of the North’ and ‘the Door of Africa.’ Tangier has been shaped across the centuries by many civilisations and cultures. It was fought over by Berbers, Phoenicians, Greeks, Romans, Vandals, Byzantines and Arabs, and in more recent centuries by the Portuguese, English, Arabs, French and Spanish.

This legacy can be heard in the Souks and the Medina and seen in the architecture and the streets of the city, which still has its French, Spanish, British and American quarters – the golf course and race track are in an area known as California.

Arabic is the language of the people, but everyone seems to understand French, and Spanish and English are widely understood too, from the cafés and restaurants to the market stalls and tourist shops, and even among the traders and children in the souks and on the streets. 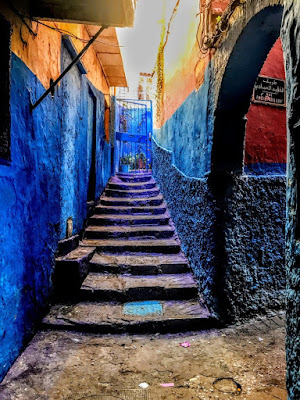 Tangier has been fought over by competing civilisations for centuries (Photograph: Patrick Comerford, 2018)

The city’s name is said to come from Tingis, the daughter of Atlas, the mythical supporter of the heavens. However, it is more likely the name derives from the Semitic word tigisis, meaning ‘harbour.’ The Greeks said Hercules slept on the coast south of Tangier, in the Caves of Hercules, before completing his twelve harbours.

But the beginnings of Tangier can be traced to the fifth century BC, when the Berbers made it a strategic town, followed by Phoenician colonists from Carthage, who made it a trading centre.

The commercial town of Tingis came under Roman rule in 146 BC and was a colony under Augustus. Originally, the city was part of the Roman province of Mauretania Caesariensis, spread across much of North Africa. Later the province was subdivided, with the area around present-day Tangier named Mauretania Tingitana. Under the Emperor Claudius, the colony was known as Colonia Julia from 38 BC.

In the early Christian period, this was the scene of the martyrdom on 30 October 298 of Saint Marcellus of Tangier, a centurion who refused to take part in sacrifices to the Roman gods on the birthday of the Emperor Maximian, and of Saint Cassian, who was beheaded a few weeks later on 3 December.

Tingis was still the main Roman city in Mauretania Tingitana in the fourth century, experiencing a new wave of political and commercial development. But the Vandals captured Tingis in the fifth century, and from here they swept across the Maghreb.

A century later, Tangier fell to the Byzantine Empire in 534-682 before coming under the control of the Umayyad Caliphate in 702-703. 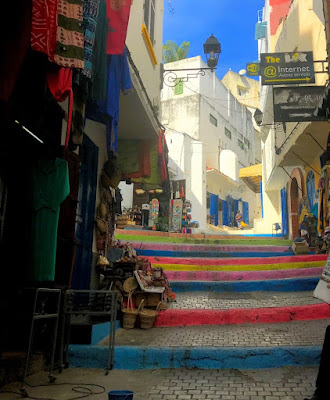 Tangier first developed its reputation as a city of spies and smugglers when it was an English colony (Photograph: Patrick Comerford, 2018)

When the Portuguese began their colonial expansion across the globe in the early 15th century, they failed to capture Tangier in 1437, but finally took the city in 1471. Portuguese rule lasted until 1662, when Tangier was given to King Charles II of England as a wedding present when he married the Portuguese Infanta, Catherine of Braganza.

The English gave Tangier a garrison and a charter that made it equal to English towns. During this brief period, English Tangier had three Irish-born governors.

Colonel Sir John FitzGerald, who was lieutenant governor in 1664-1665, was descended from a branch of the FitzGerald family of Glin Castle, Co Limerick, who were Knights of Glin.

William O’Brien, 2nd Earl of Inchiquin, was Governor in 1675-1680, and commanded the Tangier garrison during the Great Siege in 1679-1680. He was succeeded by a third Irish governor, Thomas Butler (1634-1680), Earl of Ossory. He was born at Kilkenny Castle, the eldest son of James Butler, 1st Duke of Ormond. However, Lord Ossory died before he could move to Tangier. His son, James Butler, succeeded as the 2nd Duke of Ormond in 1688.

Tangier first developed its reputation as a city of spies and smugglers during this short period as an English colony. The English planned to improve the harbour so that Tangier could play the same role that Gibraltar in later British naval strategy.

Sultan Moulay Ismail ibn Sharif of Morocco failed to seize Tangier in 1679-1680. But the unwillingness of Parliament to continue funding the English presence and a crippling blockade by the Sultan’s Berber troops finally forced the English to withdraw. Before they left in 1684, they destroyed the town and its port facilities. 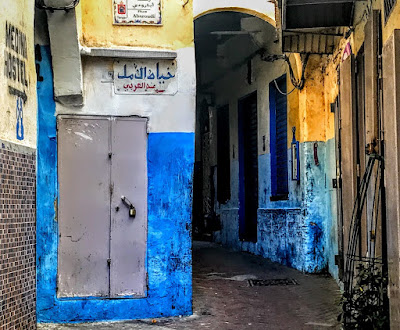 The city was partly rebuilt under Sultan Moulay Ismail. A century later, in 1777, Morocco was the first country to officially recognise the newly independent United States. But by then Tangier was in decline, and by 1810 it had a population of no more than 5,000. In 1821, Sultan Moulay Suliman gave the US the Legation Building in Tangier, the first foreign property owned by the US government. It is still standing today and is a popular tourist attraction. 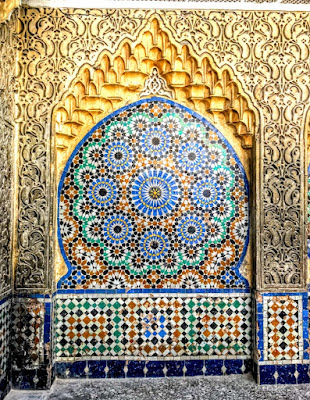 Tangier is a melting pot of languages and cultures (Photograph: Patrick Comerford, 2018)

But Tangier became a pawn in the hands of the European powers in the early 19th century. Britain blockaded the port in 1828 in retaliation for piracy; in 1844, it was bombarded by the French under François d’Orléans, Prince of Joinville; and Giuseppe Garibaldi lived in exile here in 1849-1850 after the fall of his revolutionary Roman Republic.

Later, Tangier gave its name to Tangerine oranges, first exported from Morocco through the port by Major Atway of Palatka, Florida, the first person to grow and cultivate the fruit as a distinct crop in the Americas.

Oranges were first exported from Tangier to Florida in the mid-19th century, giving Tangerines their name (Photograph: Patrick Comerford, 2018)

The city increasingly came under French influence. Morocco was partitioned between France and Spain in 1912, with Spain occupying the far north and far south, and France declaring a protectorate in the rest of the country. The last Sultan of independent Morocco, Molulay Abdelhafid, was forced to abdicate in favour of his brother, Moulay Yusef, and was sent into exile in Dar el Makhzen, a palace in the Kasbah in Tangier. 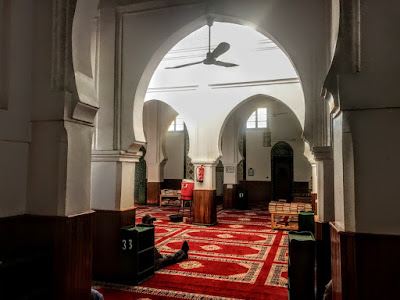 Inside a mosque in Tangier (Photograph: Patrick Comerford, 2018)

An international treaty signed in Paris in 1923 made Tangier an international zone administered jointly by France, Britain and Spain. Italy, Portugal and Belgium were added to the international administration in 1928, and they were joined by the Netherlands in 1929.

The international zone had an area of 373 sq km and by 1939 a population of about 60,000. Legally it not a part of Morocco, and Moroccans needed a passport to enter Tangier. But none of the international powers enforced a strict administration, and the port became attractive to spies and smugglers.

Spanish troops occupied Tangier on 14 June 1940, the day Paris fell to Nazi Germany. Despite calls by Spanish nationalists to annex ‘Tánger español,’ Franco claimed the occupation was a temporary wartime measure. When he abolished the city’s international status in November 1940, a diplomatic row erupted between Britain and Spain.

Eventually Spain guaranteed British rights and promised not to fortify Tangier, and the city became an international zone once again at the end of World War II in 1945. 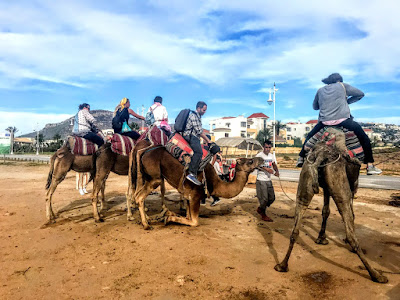 The protecting powers met in Rabat in 1952 and agreed to abolish the zone’s international status. Tangier was integrated into the rest of Morocco when full sovereignty was restored in 1956.

With its reputation for refined nightspots and loose living, Tangier attracted European and American writers and artists like Henri Matisse and William Burroughs, as well as Timothy Leary, Yves Saint Laurent, and Paul Bowls and a later generation of ‘Beat’ writers, as well as the Rolling Stones.

Tangier continued to be a hotbed of spies through the Cold War and it became a popular location for spy films, from My Favourite Spy (1951) and Espionage in Tangier (1965) to The Bourne Ultimatum (2007), starring Matt Damon, and the Bond film Spectre (2015).

An illustration of tolerance 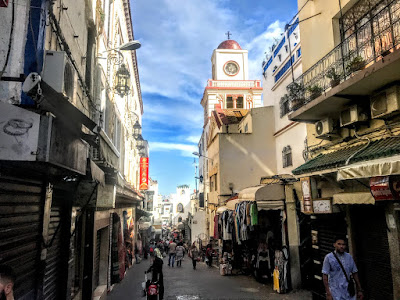 The Rue Es-Siaghinie in the centre of Tangier … the Rue Synagogue and the Spanish Mission Church are to the right (Photograph: Patrick Comerford, 2018)

At the heart of Tangier is the Medina or old walled city, a complex labyrinth of narrow streets and colourful alleyways leading down to the port. The centre of life in the Medina is the Petit Socco, a square once the haunt of drug dealers and prostitutes. Today it is lined with hotels, cafés, restaurants and tourist shops.

Because of its Christian past, Tangier remains a titular see in the Roman Catholic Church. A Spanish mission founded in 1630 was entrusted to the Franciscan friars. The city also has an Anglican church, Saint Andrew’s. 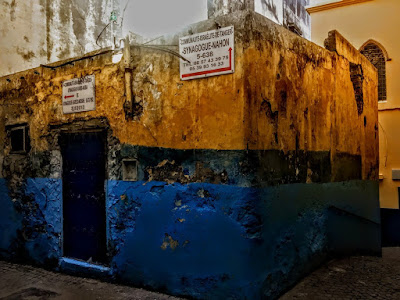 Rue Synagogue is a colourful side street beside the Spanish Mission Church (Photograph: Patrick Comerford, 2018)

After lunch in the Mamounia Palace, I went strolling through the old Medina and the Rue Es-Siaghinie, lined with cafés and bazaars, jewellers’ shops and an arts centre. I tried to find my way into the Spanish mission church, built in the 1880s. Instead, I ended up finding two synagogues on ‘Rue Sinaguogue,’ a colourful back street beside the church: the Rebbi Akiva Synagogue and the Moshe Nahon Synagogue.

The churches and synagogues of Tangier illustrate an openness and tolerance that many visitors do not expect in Islamic-majority and Arab-speaking countries in North Africa and the Middle East. 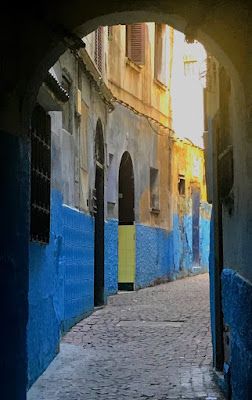 Tourists are distracted by the snake charmers, the stalls in the soukh, the camel rides on the beach and the stories of the Caves of Hercules. But Tangier is also benefitting from rapid development and modernisation, with new tourism projects, a modern business district, a new airport and a new football stadium. 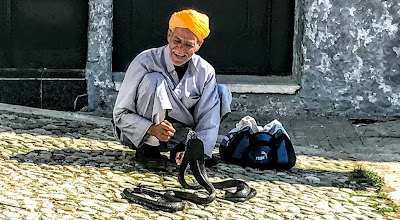 A snake charmer with his snakes in the Kasbah (Photograph: Patrick Comerford, 2018)

Tangier’s economy is also set to benefit from the new Tanger-Med port, a global logistics gateway on the Strait of Gibraltar connected to 174 ports worldwide, with handling capacities of 9 million containers. 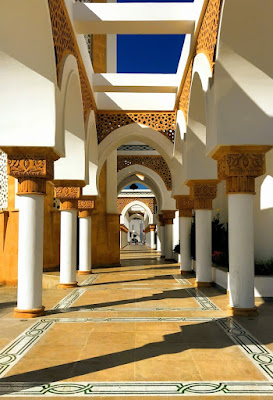 The colonnade of a modern mosque near the new port in Tangier (Photograph: Patrick Comerford, 2018)

This feature was first published in the ‘Church Review’ (Dublin and Glendalough) and the ‘Diocesan Magazine’ (Cashel, Ferns and Ossory) in December 2018 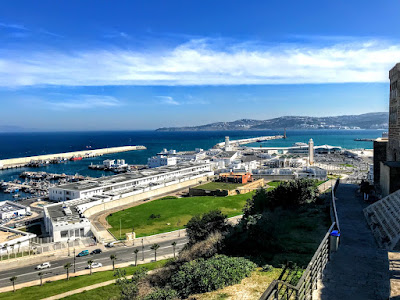 Tangier is at the meeting point of the Mediterranean and the Atlantic, of Europe and Africa (Photograph: Patrick Comerford, 2018)