Following the Stations
of the Cross in Lent 19:
Millstreet 2: Jesus
takes the Cross 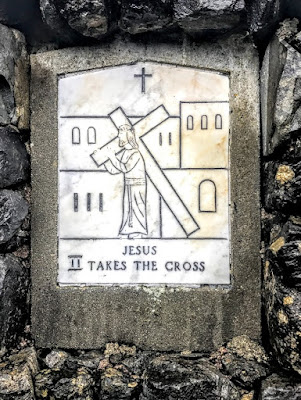 This is the Third Sunday in Lent [4 March 2018]. Later this morning, I am presiding and preaching at the Parish Eucharist (Holy Communion) in Saint Mary’s Church, Askeaton at 9.30 a.m., but weather conditions, including the heavy snow and high winds that have swept across Ireland, means that a decision was taken on Friday to cancel Morning Prayer in Saint Brendan’s Church, Kilnaughtin, Tarbert, Co Kerry, at 11.30 a.m., and I have also cancelled a planned visit to Warsaw in Poland.

In this second station by Liam Cosgrave in Millstreet, Christ stands alone in the city street as he holds the cross on his shoulder, his two hands beginning to grip one arm of the cross. 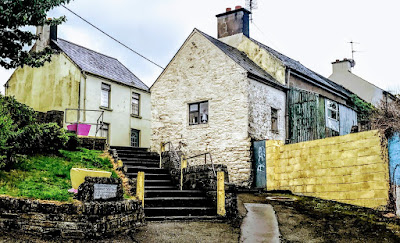 The Mill Race in Millstreet ... I have childhood memories of playing in the stream and on the steps (Photograph: Patrick Comerford)