A few days in Prague,
the Czech capital 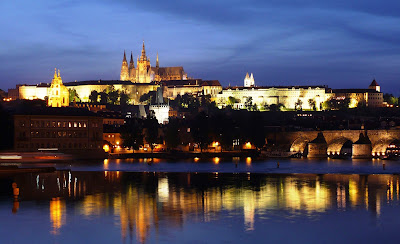 I arrived in Prague this afternoon [22 January 2019] on a Ryanair flight from Dublin and I am staying for a few days, until Friday morning, in the Grand Majestic Plaza, in the heart of historical and business centre of the Czech capital.

The hotel, at Truhlarska 16, is in the Stare Mesto or Old Town, within walking distance of all the major historic and architectural attractions of Prague.

The Old Town developed from the 11th century on, and the cobbled streets survive in many parts of the Old Town, which is a lively place, with cafés, restaurants, theatres and clubs.

The hotel is just a few steps from Republic Square and the Municipal House, Prague’s most prominent Art Noveau building with its flamboyant and exciting decoration, including its glass dome.

Here too are the Gothic Powder Gate and the Museum of Communism. The Old Town Square, Charles Bridge and Prague’s old Jewish Quarter are all within walking distance.

The open-plan Atrium Restaurant with its Winter Garden and inner courtyard, serves Czech and international cuisine.

I have only been through Prague airport, twice in 2005 and twice in 2007, on my way to and from Bucharest. Those were short stopovers, between an hour and three hours each time, with time for little more than a cup of coffee and little shopping.

Every schoolboy in my generation learned in history classes about the Defenestration of Prague, without knowing what happened or the meaning of the term. In fact, there were two incidents in the history of Bohemia in which many people were defenestrated or thrown out the windows. The first was 600 years ago in 1419, and the second almost 200 years later in 1618, although the term ‘Defenestration of Prague’ more commonly refers to the second set of incidents. Each helped to signal or trigger a prolonged religious conflict: the Hussite Wars in Bohemia after the first defenestration, and the Thirty Years’ War after the second defenestration.

This week I plan to go on a full-day walking tour of Prague, to visit the castle, the cathedral, the squares, some of the churches and Charles Bridge, to walk through Josefov, the old Jewish quarter, and visit some of the synagogues and cemeteries, and to go to a concert. and I may even read a little of Franz Kafka, Milan Kundera or Václav Havel, look for the Golem of Prague, sing about Good King Wenceslas, or learn a little more about the Prague Spring and the Velvet Revolution … and all without engaging in any defenestration.

Why not join me over the next few days as I explore the history and delights of this capital in the centre of Europe?