Saint John’s, a lost mediaeval
church, and the once forgotten
grave of John Redmond

The site of the mediaeval Saint John’s Church is behind the white-washed wall on the corner of Lower John Street and John’s Gate Street (Photograph: Patrick Comerford, 2019; click on image for full-screen resolution)

Saint John’s graveyard or cemetery is located on the corner of Lower John Street and John’s Gate Street, behind a lime-washed perimeter wall with rendered coping. The entrance is from Lower John Street, and Wexford Council maintains the cemetery. However, I found when I visited on yesterday afternoon [18 January 2019] that because of the fragile condition of the cemetery, it is still kept locked, as it has been for many decades.

This graveyard is an important element in the church history and heritage of the Diocese of Ferns and of Co Wexford. This Church stood outside the walls of Wexxford town, on the corner of John Street and John’s Gate Street in the present cemetery, but its ruins have long since disappeared.

Although no church ruins survive, this extensive graveyard occupies the site of the mediaeval Church and Hospital of Saint John, founded in the early 13th century by William Marshall, the builder of Tintern Abbey, Co Wexford. It was given to the Knights of Saint John by his son, the younger William Marshall.

Mediaeval Wexford once boasted 20 churches, but Saint John’s was the only church in the town with a steeple.

A presentment of a Jury of Wexford town and Corporation made in October 1537 found that, ‘On ye 20th day of March 1532, ye Suffreign and Comyns of ye Town of Wexford kept fyre to the doore of ye steeple of St. John’s for to let out a thyef that made escape of ye towne gaole.’

At the dissolution of the monastic houses at the Reformation, Saint John’s was suppressed and the site was granted in perpetuity to laymen. The church was demolished and its stones were used as building material. 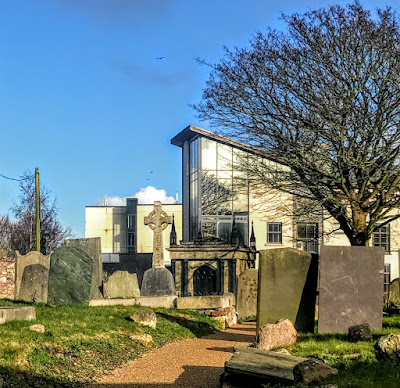 Saint John’s Church graveyard has a large collection of gravestones from 1723 and 1932 (Photograph: Patrick Comerford, 2019)

The graveyard has a collection of gravestones recording deaths between 1723 and 1932, and at least one marker is signed by James Byrne of Clone, an example of the Irish churchyard sculpture tradition in Co Wexford.

The most important graves and tombs in Saint John’s Cemetery are those of the Talbot and Redmond families.

The most prominent mausoleum was erected in 1828 on a rectangular plan. It is made of cut-granite, with a stepped roof, and has cast-iron fleche or ‘spirelet’ pinnacles at the corners, granite ashlar walls, a cut-granite plinth, cut-granite monolithic piers at the corners, and a beaded cornice on a blind frieze.

The Tudor-headed door opening is between paired clustered colonettes with a cut-granite step threshold, and a cut-granite flush block-and-start surround with chamfered reveals framing the cast-iron panelled double doors that have a quatrefoil-perforated overpanel. 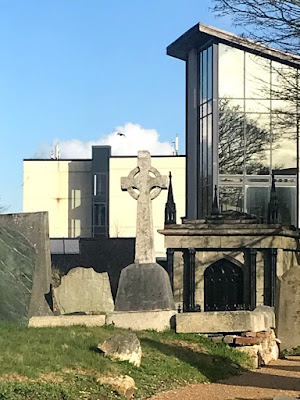 The Talbot and Redmond mausoleum is an important part of the early 19th-century heritage of Wexford (Photograph: Patrick Comerford, 2019)

This mausoleum is an important part of the early 19th-century heritage of Wexford. It was erected by John Hyacinth Talbot (1794-1868) after the death of his wife, Anne Eliza (née Redmond) (1799-1826). They were married in 1822 and she died in childbirth.

Towards the end of the 1700s, the Redmond family became involved in trade, commerce and shipping. John Edward Redmond was a liberal MP for Wexford Town from 1859 until he died in 1865. Through his influence, the railway was brought to Wexford, he developed Wexford harbour and the docks and he was responsible for the reclamation of 5,000 acres of Wexford harbour now called the slob lands.

The monument in Redmond Square to his memory is inscribed with his last words: ‘My heart is in the town of Wexford, nothing can extinguish that love but the cold sod of the grave.’

His nephews, John and Willie Redmond, grew up in Ballytrent House, near Rosslare. John Redmond was born on 1 September 1856 in Kilrane, Co Wexford. He was an MP first for New Ross (1881-1885), and then for North Wexford (1885-1891). He became the main ally and supporter of Charles Stewart Parnell, and after Parnell died in 1891 Redmond became the leader of the Irish Parliamentary Party.

Redmond remained in Parliament as the MP for Waterford City (1891-1918). In 1910, after two general elections, HH Asquith and the Liberals needed Irish support to secure the Parliament Act of 1911. Redmond’s support was won in return for the (third) Home Rule Bill introduced in 1912, and Redmond secured Home Rule in 1914.

However, his victory was side-lined with the outbreak of World War I later that year, and the Irish Volunteers soon split between those who enlisted in the army and those who supported the Irish rebellion.

During the Irish Convention on Home Rule, John Redmond died in London on 6 March 1918 from heart failure after an operation to remove an intestinal obstruction. His last words were, ‘Father, I am a broken-hearted man.’ He was 61.

Fearing street protests, Redmond’s friends and family took his body from Kingstown Harbour (Dun Laoghaire) and placed it on a special train to Wexford town. The people of Wexford turned out in their tens of thousands for his funeral in Wexford town. The bells of ever church in the town tolled simultaneously, every shop was closed, and house blinds were drawn.

His seat in Parliament was taken by his son Willian Archer Redmond, who had been MP for East Tyrone. But later that year, Redmond’s party was defeated by Sinn Fein in the general election in December 1918.

An inscription on the mausoleum reads:

A commemoration event in the town marked his death for many years. The centenary of his birth in 1956 attracted seven government ministers and in an address Éamon de Valera paid tribute to a ‘great Wexford man’ – while decrying his decision to encourage Irishmen to fight in World War I.

Outside, a panel on the John Street wall points out that graveyard is the burial place of Richard Monaghan (‘Dick Monk’) Captain of the John Street Corps of United Irish rebels in 1798. He led his men in actions in Co Wexford, Co Wicklow, Co Kilkenny, Co Carlow and Co Laois and was killed by a party of Yeomen near Bunclody around 27 June 1798. 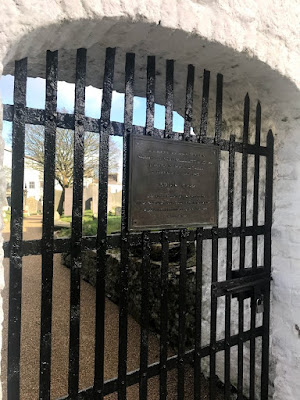 Over the years, however, the cemetery was kept locked, the Redmond mausoleum was neglected fell into disrepair, its granite walls covered in grime its railings rusting and the pinnacles falling off.

The tomb was cleaned up for the centenary of the passing of the Home Rule Act in 2014 and the cemetery was cleaned up for the centenary of his death. The local author Billy Roche has written two pieces for a walking tour, one for the mausoleum and another for Redmond Park, named in honour of John Redmond’s brother, Major Willie Redmond, who was killed at the Battle of Messines Ridge.

Saint John’s is open by request but is still closed to the general public. Wexford County Council has plans to re-open the graveyard and provide access to the Redmond mausoleum. The graveyard conservation works plan to return the site to a grassed space.

The author Billy Roche has written a pieces for the Redmond mausoleum as part a walking tour (Photograph: Patrick Comerford, 2019)