The daffodils are early this year. is a bright, sunny flower. They are growing along the sides of the road on the ditches and the banks, and already early daffodils are on sale in the supermarkets in this part of West Limerick.

It is all about three or four weeks too early, for daffodils normally do not arrive in the supermarkets until the first week in February. It is only a few years since I enjoyed heading out to see fields of fresh daffodils near Gormanston and Julianstown in Co Meath in late March or even early April.

Daffodils like to flower before the leaves grow on the trees, and this way they can get plenty of sunlight, but this is very early. They begin to flower in early spring, and usually grow in groups.

On Sunday morning [13 January 2019], it seemed the banks lining the road from Castletown Church east to Pallaskenry were alive with riots of daffodils on the north side of the road, taking advantage of the little sunshine that comes with the lengthening of days and the promise of winter turning to spring.

They grow in most places – along roadsides, in hedgerows, meadows and waste ground – and there are at least 50 different species of daffodil. From about the 16th century, they have also been known as ‘daffadown dilly’ or ‘daffydowndilly.’ But the daffodil has also been as the ‘Lent lily.’

In western countries the daffodil is also associated with spring festivals such as Lent and Easter. In Germany, the wild narcissus is known as the Osterglocke or ‘Easter bell.’ In England, the daffodil is sometimes referred to as the Lenten lily.

Perhaps because of its association with Lent, the daffodil became the national flower of Wales, associated with Saint David’s Day (1 March). Yet it is too early to start thinking of Lent, which arrives quite late this year.

I was surprised to learn yesterday that the daffodil is a form of narcissus. In Greek mythology, Narcissus (Νάρκισσος, Nárkissos) was a hunter from Thespiae known for his beauty. He loved everything beautiful, but he was so proud that he disdained all who loved him, causing some to end their lives by suicide to prove their unrelenting devotion to his striking beauty.

The word narcissus has come to be used for the daffodil, but is the flower named after the myth, or the myth after the flower? Or if there is any true connection at all? Although there is no clear evidence that the flower's name derives directly from the Greek myth, this link between the flower and the myth became firmly part of western culture.

The daffodil is prized as an ornamental flower, but some people consider narcissi unlucky, because they hang their heads implying misfortune. White narcissi are especially associated with death, and have been called grave flowers. In ancient Greece, narcissi were planted near tombs, and Robert Herrick describes them as portents of death, an association that also appears in the myth of Persephone and the underworld.

The daffodil or narcissus is the most loved of all Irish and English plants, and appears frequently in English literature. No flower has received more poetic description in English except the rose and the lily, with poems by writers from John Gower, Shakespeare, Milton, Wordsworth, Shelley and Keats.

Frequently the poems deal with self-love because of the association of the daffodil with Narcissus, and the flower that sprang from the youth’s death. Spenser announces the coming of the ‘Daffodil in Aprill’ in his Shepheardes Calender (1579).

William Wordsworth’s poem I Wandered Lonely as a Cloud (1804) provides many people with their main literary image of the flower. But Wordsworth refers to the daffodil in many.

AE Housman is referring to the daffodil when he writes about ‘The Lent Lily’ in A Shropshire Lad, describing the traditional Easter death of the daffodil.

Narcissi first started to appear in western art in the late middle ages, in panel paintings, particularly those depicting crucifixion, symbolising not only death but also hope in the resurrection, because they are perennial and bloom at Easter.

So perhaps there is a link in these daffodils appearing on the roadside near Castletown Church that helps to prepare the link between Epiphany and Good Friday, between Christmas and Easter, between birth and death, between the Incarnation and the Resurrection. 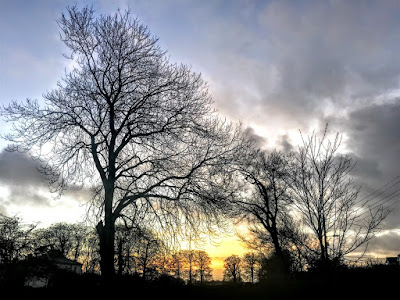 The skies after sunset at the Rectory in Askeaton, Co Limerick, last night (Photograph; Patrick Comerford, 2019)