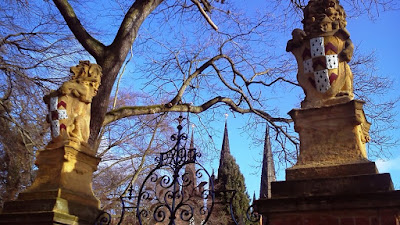 ‘Pax 1919’ is the overpowering message on the gates into the Garden of Remembrance in Lichfield (Photograph: Patrick Comerford)

I wonder whether we were we too soon in bringing the commemorations of World War I to an end at the end of last year.

The date 1919 is prominent on iron gates into the Garden of Remembrance in Lichfield, and the three medals most allied participants in the war received, including my grandfather, include the ‘Victory Medal 1914-1919.’

The Garden of Remembrance is a beautiful and peaceful garden in the heart of the Lichfield, beside Minster Pool and with the three spires of Lichfield Cathedral in the background.

The location was chosen because of its picturesque setting between Minster Pool and the Cathedral Close.

Work on laying out the garden began in 1919. The War Memorial was designed by the prominent architect, Charles Edward Bateman (1863-1947), and the work was carried out by the Lichfield stonemasons, Bridgeman and Sons of Lichfield.

The memorial, which is the focal point of the garden, is carved from Guiting stone, and the central figure of Saint George is sculpted in Portland stone. The dedication ceremony took place on 20 October 1920. The lower panels added later are dedicated to people who had died in World War II and later wars.

The stone lions on the gate piers reputedly came from Moxhull Hall in Wilshaw, near Sutton Coldfield. The 18th century stone balustrades and plinth came from Shenstone Court, south of Lichfield.

Each of the stone lions on the gate piers was embellished with the Lichfield city coat of arms, and the above the gates in wrought iron are the words and date PAX 1919. 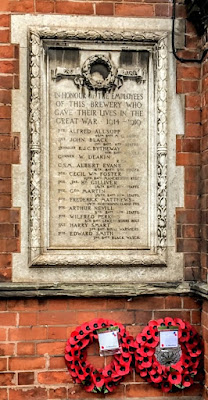 The dates ‘1914-1919’ are used on the memorial at the former Lichfield Brewery in Upper John Street (Photograph: Patrick Comerford)

At one time, I though the date 1919 referred to the year work began on laying out the garden. But then I realised that at first World War I was referred to as either the Great War or the 1914-1919 War – few realised that this was just the first among world wars, and that the second would begin just 20 years later.

The dates ‘1914-1919’ are used, for example at the memorial with 13 names at the former Lichfield Brewery in Upper John Street, Lichfield. The same dates appear on war memorials from Penkridge and Cambridge to overpowering war memorial at the entrance to Liverpool Street Station in London. 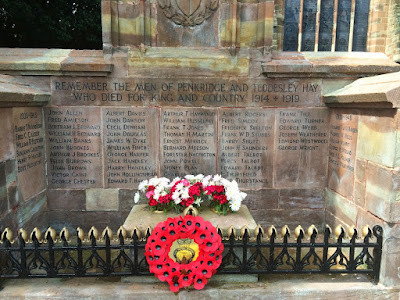 The dates 1914-1919 on the War Memorial in Penkridge, Staffordshire (Photograph: Patrick Comerford)

The medals received by most Irish and British participants in World I, including my grandfather, Stephen Edward Comerford, included the Victory Medal 1914-1919, which is inscribed ‘The Great War for Civilisation 1914-1919.’

I noticed in Venice recently how Italian memorials give the dates for World War I as 1915-1919. 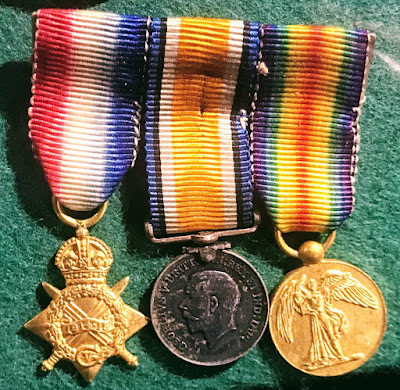 This is the date of the ceasefire on the Western Front. But hostilities continued in other regions, especially across the former Russian Empire and in parts of the old Ottoman Empire.

It took a further six months of negotiations at the Paris Peace Conference before the Treaty of Versailles was signed on 28 June 1919, ending the state of war between Germany and the Allied Powers. It was exactly five years after the assassination of Archduke Franz Ferdinand, one of the principal events leading to the outbreak of World War I – or should I say the ‘1914-1919 War’?

But what really strikes me each time I pass the gates of the Garden of Remembrance in Lichfield is that the central message is PAX, ‘Peace.’ Instead of wondering whether we were too soon in ending the commemorations of World War I, we might ask whether we too soon in giving up the struggle for Peace in 1919 and ensuring that those who died had died in a ‘war to end all wars.’ 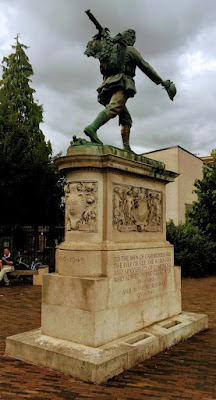