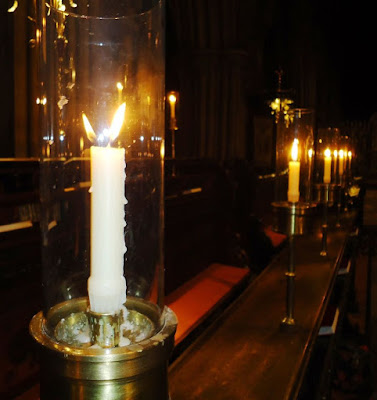 Today and tomorrow [27 and 28 February 2019] are the last two days to visit the ‘Pilgrimage and Prayer’ exhibition in Lichfield Cathedral, the first exhibition of the year in the cathedral.

The exhibits include a 14th century document listing relics owned by the cathedral, stonework linked with the mediaeval shrine of Saint Chad, a 1420 edition of Chaucer’s Canterbury Tales, and a 17th century casket that contained the relics of Saint Chad after the Reformation.

The exhibition ‘Pilgrimage and Prayer’ opened on 14 January and closes tomorrow (28 February 2019).

The on Friday (1 March), the cathedral holds the first of a number of services to mark the festival weekend of Saint Chad, Bishop and Missionary, patron saint of Lichfield Cathedral, whose feast day is on Saturday (2 March).

These begin with Morning Prayer and Litany at 8 a.m., followed by the Eucharist at 12.30 and the Solemn First Evensong of Saint Chad at 5.30 p.m.

Lent begins later next week on Ash Wednesday (6 March 2019). Over recent years, Lichfield Cathedral has developed the idea of ‘Ashes to Go,’ when the invitation to share in the beginning of Lent is taken outside the church walls. As people go about their daily business, they are offered the chance to receive the cross of ash as a token of repentance, to be prayed for and to receive a prayer card.

As an expression of the cathedral’s mission to people beyond the congregation, Canon Pat Hawkins will be offering this ministry in Dam Street at lunch time on Ash Wednesday, from 12 noon to 2 p.m.

During Lent, Lichfield Cathedral is hosting an exhibition on the theme of the Stations of the Cross and is hosing a series of Lent lectures.

‘Journey to the Cross’ is an exhibition of works by the cathedral’s Artist in Residence, Peter Walker, reinterpreting the Stations of the Cross.

This exhibition, from Ash Wednesday (6 March) to Easter Day (21 April), is the culmination of two years’ work to create a contemporary fine-art telling of Christ’s journey through Jerusalem to Calvary and his crucifixion, death and burial. The stations invite contemplation and reflection, enabling us to bring our life experiences into our prayer.

The Lent lecture series, ‘Perspectives on Abraham,’ explores the influence of Abraham on the faiths of Judaism, Christianity and Islam.

Wednesday 20 March, ‘A Christian Perspective,’ the Revd Dr John Binns of the Queen’s Foundation, Birmingham, a former vicar of Great Saint Mary’s, the University Church Cambridge, and a Visiting Professor and a founding director of the Institute for Orthodox Christian Studies, Cambridge.