Three books for
a pilgrim’s journey 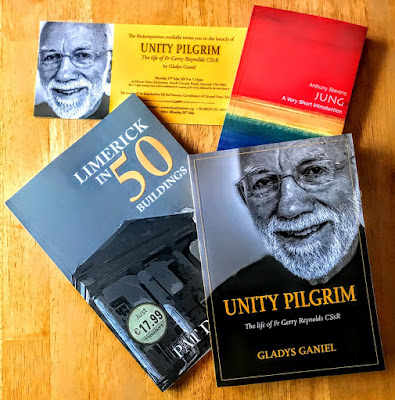 I was in Mount Saint Alphonsus, the Redemptorist church in Limerick, earlier this week [27 May 2019] for the launch of a new book by Gladys Ganiel on the life, witness and ministry of Father Gerry Reynolds (1935-2015).

The new book, Unity Pilgrim: The Life of Fr Gerry Reynolds CSsR (Dundalk, 2019), is published by Redemptorist Communications (€13.95). It was launched last month in Belfast by the Revd Ken Newell, Minister Emeritus at Fitzroy Presbyterian Church and a former Moderator of the Presbyterian Church in Ireland, and in Limerick. In Limerick, the book was launched by Ed Petersen, who worked with Gerry for many years in Clonard Monastery’s peace and reconciliation mission.

Gerry was from Mungret, on the edges of Limerick, and went to school in Saint Munchin’s College and Saint Clement’s College. Later, he was the Rector of Mount St Alphonsus in 1975-1978.

The author of this new book, Dr Gladys Ganiel, is a Research Fellow in the Senator George J Mitchell Institute for Global Peace, Security and Justice at the Queen’s University Belfast.

When Gerry first arrived in Belfast in 1983, the city was starkly divided by conflict and violence. Clonard Monastery is on the interface between the Catholic Falls Road and the Protestant Shankill Road.

His instinct to reach out to those who were suffering, on both sides of the community, became a lifelong devotion to the cause of peace and Christian unity.

This book tells about Gerry’s friendships of the Cornerstone Community and the Clonard-Fitzroy Fellowship, how he became involved in secret talks with republican and loyalist paramilitary groups, and how he set up of the ‘Unity Pilgrims.’

Gerry played a crucial role in the Northern Ireland peace process. He believed the Church could be ‘God’s peace process in human history’, and that dialogue and friendship would open hearts to the mutual understanding and trust that are the foundations of true peace.

His role in peace-making is not as well-known as that of his Redemptorist colleague, Father Alec Reid, who was the pivotal broker in the secret Hume-Adams talks. But Gerry assisted Alec behind the scenes and also developed a public ecumenical ministry. Gerry’s diaries reveal how the two Redemptorist priests were sustained during this time by prayer.

Gladys Ganiel says, ‘Faith is what made Reynolds who he was; without his confidence in the absolute goodness of God and his faith-filled friendships, he would not have made such a difference for peace.’

He became a member of the ecumenical Cornerstone Community, which had a house by the peace wall. With its leader, the Revd Sam Burch, a Methodist minister, he visited more than 50 grieving families on both sides of the wall. With the Revd Ken Newell, he developed the Clonard-Fitzroy Fellowship, which received the international Pax Christi Award in 1999.

He also formed the Unity Pilgrims, an initiative in which Catholics associated with Clonard worship with Protestant congregations on Sunday mornings. His last major project was ‘In Joyful Hope,’ in which Christians of all traditions attend each other’s Eucharistic celebrations.

Gerry was also a journalist in Dublin in the 1960s and 1970s on the Redemptorist Record, which later changed its name to Reality, and as the editor of Intercom, the influential priests’ journal.

Gerry believed we were cousins. We met for lunch in Rathgar when he was staying in Marianella, the Redemptorist house, and I was lecturing nearby at the Church of Ireland Theological Institute.

Although I am still not sure how we were related, he spoke of mutual cousins and Millstreet connections, including the Murphy, Crowley, Mahony and Riordan or O’Riordan families, and Clayton Love. I have never tried to untangle this side of the family tree, but the ecumenical generosity that marked his life was came alive in the way he invited me to share with him at the funeral of a mutual cousin, Rose (Walsh) O’Reilly, in 2005.

He truly was an ecumenical pilgrim, the ‘Unity Pilgrim’ that gives this book its title.

It was good to meet members of Gerry’s family on Monday evening, as well as many Redemptorist friends, including Brendan McConvery, Gerard Moloney and Seamus Enright.

On the day of the book launch, I bought two other books in Limerick: Jung, A Very Short Introduction (Oxford, 2001), by Anthony Stevens, and Limerick in 50 Buildings (Stroud: Amberley, 2019). Both should help me in my journeys as a pilgrim in very different ways. But more about them on another day, perhaps.