Visiting a convent church in
a quiet corner of Córdoba 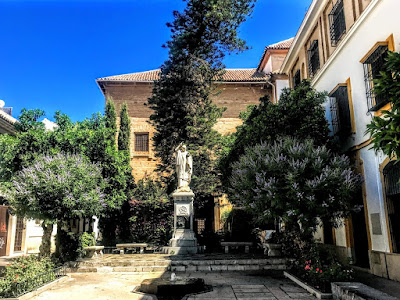 The Convent of the Capuchins is in a small square in the north-east corner of the centre of Córdoba (Photograph: Patrick Comerford, 2019)

On Friday morning [7 June 2019], with a few hours left in Córdoba before catching a train to Malaga in time for a flight to Dublin, I visited a few smaller churches in city.

I had already visited the he Mezquita-Catedral, or Great Mosque and Cathedral of the city, and the Royal Church of Saint Paul, once part of a larger Dominican complex.

I was staying in the Hotel Macia Alfaros, on the north-east edge of the old walled city, and another convent church close to the hotel was the convent of the Capuchin sisters or Capuchin Poor Clare and their church dedicated to Saint Raphael, the archangel often seen as the protector of Córdoba. 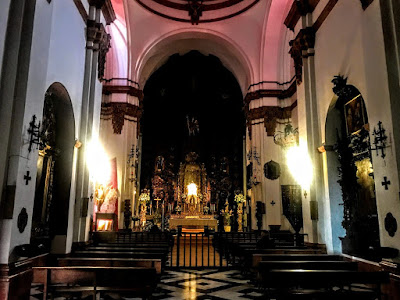 Inside the church of the Capuchin sisters in Córdoba (Photograph: Patrick Comerford, 2019)

The convent and church, popularly known as the ‘Convent of the Capuchins,’ were built in 1725 on the site of the former stately home of the Marquises of Sessa, dating from the 15th century.

Some of the original features survive in the cloisters, including the impressive Mudejar gate and Roman, Visigoth and Islamic capitals.

The convent church has a single nave with barrel vaulting above. 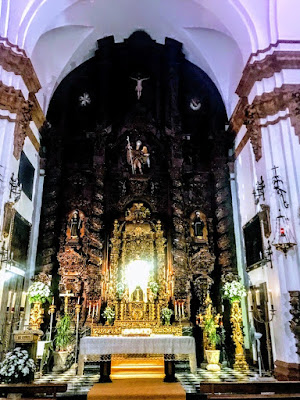 The high altar in the convent church (Photograph: Patrick Comerford, 2019)

The convent has three main courtyards. The first patio is the compass or anteroom of the convent and is surrounded by four galleries with arches over columns and coffered ceilings.

I did not get into the main cloister on Friday morning, but this gives access to the hall of the old palace, which has been converted into the refectory. The decorative ceilings and plasterwork in the refectory are also in the Mudejar style. The coat of arms of the family who donated the building is displayed on several ceilings and walls. 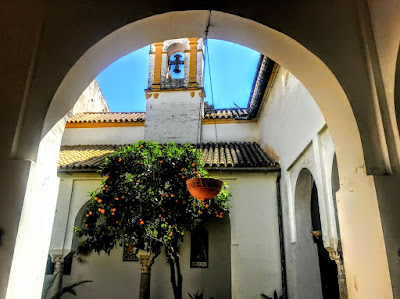 The bell and an orange tree grace the first of the courtyards or patios (Photograph: Patrick Comerford, 2019)

On the streets of Córdoba, I passed so many other church buildings, including the Church of Saint Nicholas, the Capilla Mudéjar de San Bartolomé and the Church of the Discalced Carmelites.

There is much to come back to Córdoba to see. 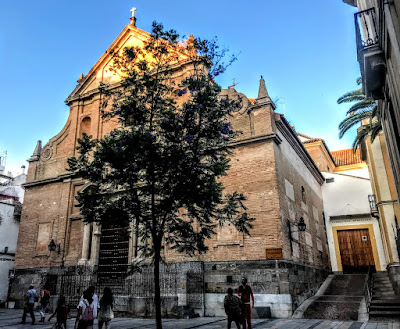 The Church of the Discalced Carmelites in central Córdoba (Photograph: Patrick Comerford, 2019)