‘Get up and go on your way;
your faith has made you well’ 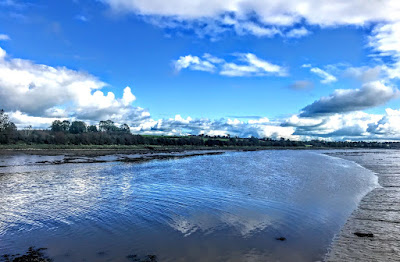 This morning’s Gospel reading provides many opportunities for many sermons on faith and healing, inclusion and exclusion, how Christ meets our every need, how we need conversion, on the connection between healing of the body and healing of the soul, perhaps even on the value of good manners and learning to say thank you.

Some parishes are going to hear about one Samaritan who returns and says thank you. Others may hear about nine other lepers who did exactly as they were told, went and showed themselves to the priests, received a clean bill of health and were restored to their rightful place in the community of faith.

But which is the greatest miracle for you: the healing of these 10 people? Or their restoration to their rightful places in the community of faith?

Perhaps it is worth noting that it is the 10 men, not Christ, who keep their distance on the outskirts of the village, because they are forced to behave this way, to be marginalised and to live on the margins.

Christ keeps his distance, as might be expected. Yet, from that distance, he sees. Many Bibles have verse 14 to say that ‘he saw them.’ But the Greek says simply, καὶ ἰδὼν, ‘and having seen,’ without any object, there is no ‘them.’

For Christ, we are not mere objects; and for Christ there is no ‘us’ and ‘them.’ He sees the future without the limits of the present.

This is a story about trusting in God’s plans for the future, rather than living in the past, living with the fears of the present, living without hope for the future … precisely the context for the urgings and exhortations to the exiles by the Prophet Jeremiah in the Old Testament reading (Jeremiah 29: 1, 4-7), precisely the hope the Apostle Paul has for Saint Timothy in the epistle reading (II Timothy 2: 8-15).

Christ sees … sees it as it is in the present, and as it could be in the future.

Even the village here is not named.

We should not forget that not one but 10 were healed. Christ does good – even to those who will not be thankful.

And even then, we do not know why the other nine did not return to say thanks. It took an eight-day waiting process for a person with leprosy to be declared clean by the priests.

After those eight days, did they then go and give thanks to God in their local synagogues?

Did they first breathe sighs of relief and return to the families they loved but had been isolated from for so long?

Did they return to that unnamed village, and find that 10 days later Jesus had moved on … the next named place we find him in is Jericho (see Luke 19: 110, the Fourth Sunday before Advent, 3 November 2019)?

Surely Christ does good without expecting a thanks that comes straight from some Victorian book on good manners.

How often when we give a gift to someone do we want to control how they use it?

I give a Christmas or birthday gift, and then I am upset when they do not like it, when they trade it in for something else, or pass it on to someone else, or simply just never say thank you or acknowledge what I have done for them.

But who was the gift supposed to benefit: me as the giver, or you as the receiver? What was it a token of: my love for you, or my need for you to acknowledge how important I am to you?

A begrudging attitude to how others receive and use the gifts I give, or taking offence when I feel they have not thanked me enough, amount to a passive aggressive attitude on my part, a desire to control. If we give gifts only to be thanked, are we truly generous?

And if I only say thank you so I remain in someone else’s esteem, perhaps even to be rewarded again, to be kept on their invitation list, am I truly grateful?

Christ is not passively aggressive in this story. He is not seeking to control. He sends the 10 on their way … and they go. If he had expected them to return, he would not have been surprised that one returned; he would have waited around in that unnamed village until the other nine had time to make their humble ways back there to thank him.

Instead, it is more important what Christ frees them for, and where he frees them.

He frees them to regain their place in the community, in the social, economic and religious community that is their rightful place.

For the Samaritan, his ‘faith has made him well’: ἡπίστις σου σέσωκέν σε, or, more accurately, your faith has saved you, rescued you, restored you. The word σῴζω is all about being saved, rescued, restored, ransomed, and not just about regaining health and physical well-being.

That land between Samaria and Galilee is where we find Christ today. The in-between place, the nowhere land, the place where people need to be saved, rescued, restored, ransomed.

We all find ourselves in the in-between place, the nowhere land … to borrow a phrase from TS Eliot, wandering in the ‘Waste Land.’

Perhaps, just for one moment, it is possible to imagine that Christ has arrived in that particular in-between place for a reason. For the land between Samaria and Galilee is neither one place nor the other.

This is the place where Christ is travelling through in this Gospel story. It seems to me that I am often travelling in that place every day, today.

It is difficult travelling in this in-between land. When we realise we are there, then it may be easier to identify with the 10 Lepers, cast out into the in-between land, not knowing where to go, rather than with those who appear certain about where they are going.

When we get to where you are going, we should remember how we feel about the present unknown, whether it is fear – ‘I will show you fear in a handful of dust’ – whether it is trepidation, anticipation, or joy that is tinged with all of these, in this in-between time, this nowhere place.

Shakespeare reminds us, in the words of Portia in The Merchant of Venice,

The quality of mercy is not strained;
It droppeth as the gentle rain from heaven … (The Merchant of Venice, Act IV, Scene 1)

These 10 lepers were cut off from all they knew and loved, all the certainties they once enjoyed or took for granted.

And when we move from an in-between place and nowhere land, we should not hold back from the call to join the task of cleansing, healing, restoration. We do it not for ‘Thank Yous’ and plaudits. It is not about you, it is not all about me.

Indeed, it is not this one man’s thanks that is important, but that his thanks is expressed in turning around, conversion, and praising God, bowing down before Christ as his Master and as the Lord God.

Martin Luther was once asked to describe the nature of true worship. His answer was the tenth leper turning back.

Christ invites us into that region between Samaria and Galilee, that space between wrong-doing and right-doing, between them and us – and bids us find our healing and salvation – and theirs. And in doing that we find ourselves engaged, quite naturally, in true worship. And in Christ we realise that there is no us and them – there is only us. 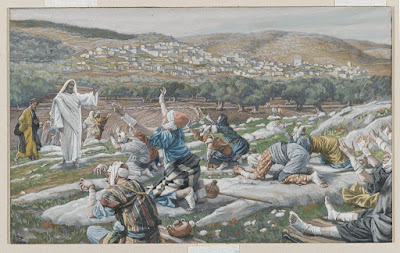 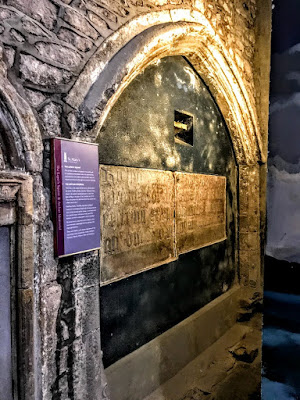 The ‘Leper’s Squint’ and the Arthur Memorial behind the organ in Saint Mary’s Cathedral, Limerick (Photograph: Patrick Comerford, 2018) 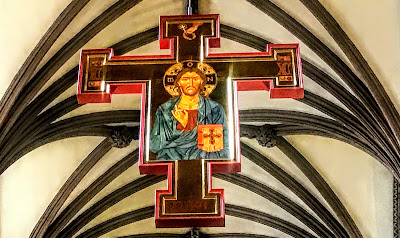 ‘Remember Jesus Christ, raised from the dead, a descendant of David – that is my gospel’ (II Timothy 2: 8) … the icon cross in Lichfield Cathedral (Photograph: Patrick Comerford, 2019) 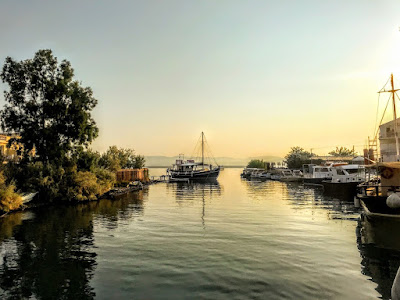