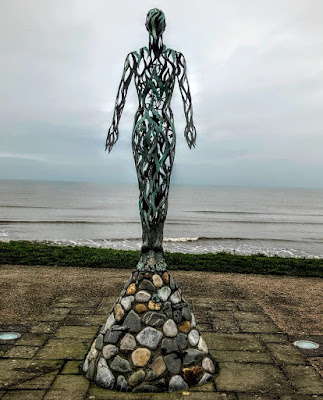 For one of our last walks on a beach this year, two of us decided to go to Laytown and Bettystown on the Co Meath coast yesterday afternoon [30 December 2019].

However, a full tide was in, it was getting dark, and walking along the beach below the car park at Laytown and north to Bettystown proved impossible at full tide.

I had stopped to photograph Linda Brunker’s Voyager above the beach at Laytown when we bumped into an old friend and colleague, and three of us decided to head on to Relish in Bettystown for a late lunch.

I could hardly believe that it is a year and a half since all three of us had been there for lunch, and it was time to catch up on the past year and on old times.

Linda Brunker’s Voyager was commissioned by Meath County Council and was unveiled in 2004. The stunning, 6-ft bronze figure matches Jarlath Daly’s sculpture, Flying a Kite, in Bettystown, and was inspired by the ocean and all that is in it, according to the artist. 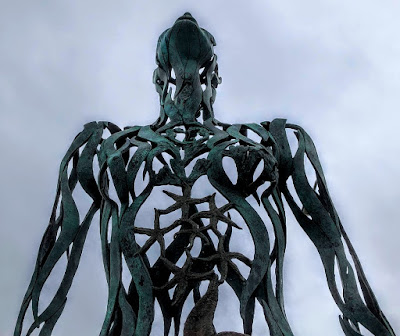 A detail of Linda Brunker’s ‘Voyager’ above the beach at Laytown, Co Meath (Photograph: Patrick Comerford, 2019)

Linda Brunker has designed pieces for the public park at Laguna Beach, California. The ocean has inspired her all her life and she was delighted to when she was commissioned by Meath County Council to design the Voyager. She told the Drogheda Independent some years ago, ‘I have always come to the beach at Laytown to collect elements to incorporate into these works. These include shells, seaweed and other items.’

Her beautiful sculpture on the seafront at Laytown led to much debate locally about the inspiration behind the work and the name it should be given. The suggested names for the work ranged from ‘The Lady of the Sea’ to ‘Inse’. Some residents said the 6 ft bronze lady reminds them of the ‘Little Mermaid’ at the entrance to Copenhagen Harbour.

The sculptor Linda Brunker was then based in Rathoath, Co Meath. She has exhibited around the world and designed pieces for the public park at Laguna Beach, overlooking the Pacific Ocean in California.

At time the Voyager was unveiled, she said it ‘is inspired by the sea and the myriad of life that is contained within it. ‘It reflects the draw that people feel toward the ocean and the healing effect it has on us.’

‘She is in a lively and uplifting pose and should be easily recognisable from a distance,’ she told the Drogheda Independent. ‘The closer the viewer gets the more they will see the details like fish, seaweed, starfish and shells.’

She revealed that moulds of sea creatures found on Laytown beach were used to decorate the Voyager. Colours of blue and green ordain the statute with details picked out in orange and white and black. All colouration was achieved using traditional chemical patination, and some areas are highlighted to accentuate the detail.

Several coats of lacquer were added to finish and protect he work from the elements. The figure stands on a base clad with rounded stones from Laytown, to echo the beach, and there are some bronze elements in the base, including namely fish and starfish. 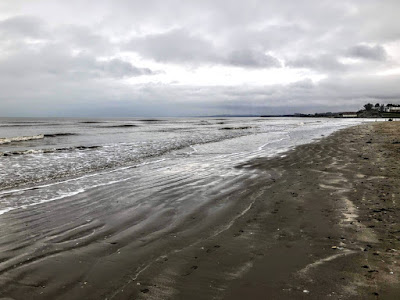 Linda Brunker’s other works include ‘The Children of Lir,’ a bronze sculpture overlooking Lough Owel, outside Mullingar, Co Westmeath. It was commissioned by Westmeath County Council in 1993.

She has received many public commissions through Ireland and in Brussels, London and the US, and her work is also in private collections in Ireland, Europe, Japan and the US.

Her other public works include the ‘Pact Woodland Sculpture Project’ (2006) in Tymon Park, Dublin; ‘The Healing Tree’ (2002), Virginia, Co Cavan; and ‘The Wishing Hand’ (2001), Department of Education, Marlborough Square, Dublin. 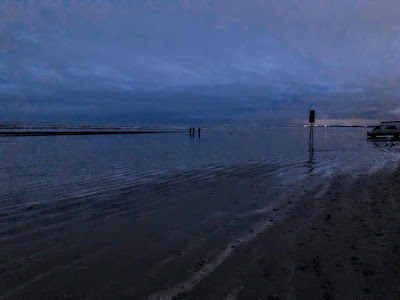