Fieldgate Street Great
Synagogue, once at the
heart of the Jewish East End 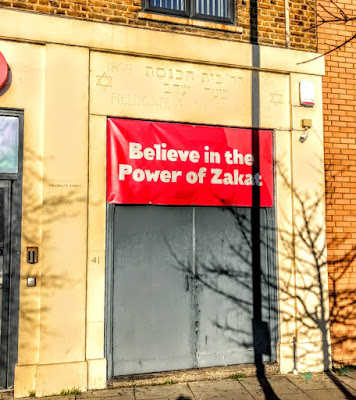 The former Fieldgate Street Great Synagogue, once at the heart of the Jewish East End, was sold to the East London Mosque in 2015 (Photograph: Patrick Comerford, 2020)

Fieldgate Street is in the London Borough of Tower Hamlets and stretches for about one fifth of a mile in the East End. It lies to the south of Whitechapel Road and leads east to New Road and Stepney Way. The east half of the street was once known as Charlotte Street.

The Fieldgate Street Great Synagogue was once a remarkable survival in the Jewish East End and was the last active synagogue in Whitechapel proper.

Whitechapel was known in the1880s for the Jewish community that filled the surrounding streets. Many of the newcomers were refugees fleeing anti-Semitic terror in Imperial Russia.

The relationship between the newcomers and the existing Anglicised community was an uncomfortable one; the immigrants suspected the Orthodoxy of the English Jews, while English Jews, who lived and worshipped in greater affluence, tended to look down on their less fortunate brethren. The new arrivals soon became a majority, but with no effective say in community affairs.

The MP for Whitechapel, Samuel Montagu (1832-1911), also feared for the safety of the members of small synagogues in cramped spaces, and he founded the Federation of Synagogues in 1887 to amalgamate them into larger, safer premises.

Many of the Federation’s synagogues used the title ‘Great’ in their names, and this also helps to explain the name of Fieldgate Street Great Synagogue.

The name of the Fieldgate Street Great Synagogue has survived in the present building (Photograph: Patrick Comerford, 2020)

Fieldgate Street Great Synagogue was founded by the Federation of Synagogues in 1899, with the amalgamation of three small chevrot through appeals that condemned existing premises as unsuitable for public worship.

It was built with a 90-year lease of land that was previously occupied by a private house and workshop that was the home of a ginger-beer maker and a tea chests dealer.

The building costs were estimated at £3,500. The Federation of Synagogues contributed £500, private members raised £700 and Samuel Montagu donated £200 of his own money.

Nathaniel Charles Rothschild performed the opening ceremony, Samuel Montagu, later Lord Swaythling, became the Honorary President, and Solomon Michaels, a clothier, was the Acting-President. A city-based architect, William Whiddington, was commissioned to design the synagogue in line with Ashkenazi traditions. 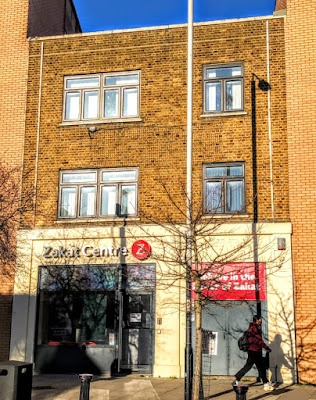 A reminder of the three-storey house that stood at the front of the synagogue, now housing the offices of a charity centre (Photograph: Patrick Comerford, 2020)

A three-storey house at the front of the synagogue included a shop, a first-floor caretaker’s flat and a top-floor committee room. To the right of the shopfront double iron gates opened outwards for two entrances, as the synagogue segregated men and women. The women’s door would lead directly to a staircase giving access to the gallery, while the men’s door led to a corridor to the main floor of the synagogue behind.

The synagogue itself was in a spacious, well-lit and ventilated, long room that could accommodate 280 men below and 240 women in the three-sided gallery. On two tiers of paired Corinthian columns, the ceiling rose to a part-glazed seven-sided central vault.

The bimah or reading platform in the centre of the synagogue flanked by high-backed benches on the long walls. Extra rows were inserted behind the bimah. The Aron haKodesh or Holy Ark holding the Torah scrolls was set against the back wall at the north end. It had a tall, upper tier with large Luhot or tablets representing the Ten Commandments flanked by Lions of Judah and topped by a semi-dome. Above it was a large round window.

The synagogue did not point to Jerusalem, as is traditional. This was not practical, and so the building had a north-south orientation.

The synagogue was badly damaged during the Blitz, as were many buildings in the East End did. A first phase of essential repair with new steel-work and concrete roofing for the main hall was carried out in 1947-19488 by Lewis Solomon & Son architects, SH & DE White civil engineers and RH Rhodes Ltd builders.

Work on the hall and gallery, retaining the Corinthian columns, was completed in 1952 by Ashby and Horner Ltd, builders, under the oversight of Lewis Solomon, Son & Joseph architects, and the synagogue chairman, Nathan Zlotnicki.

Fieldgate Street Great Synagogue reopened in 1959, retaining significant features from the earlier building. The house in front of the synagogue was refurbished as a communal centre in 1959-1960, when Ashby & Horner reconfigured the ground-floor layout and provided a plain front of brick above a rendered lower storey. New dedicatory inscriptions were put in place above and beside the main entrance.

Under the leadership of the Revd Leibish Gayer, the refurbishment kept the humble presentation of the old building. The passage along the east wall led into the synagogue, where the marbled columns and some old pews survived, the remade Ark bore a more humble Luhot and carved and gilt-painted Lions of Judah. To the left of the Ark was a stone Royal Family prayer tablet, a tradition introduced from 17th century Amsterdam that became common in many English synagogues.

Above the Ark, two high-level round windows had stained-glass with Stars of David. There were also Star of David light fittings, and a large ceiling lantern lit the whole space. Panelled gallery fronts served as donation boards, bearing commemorative inscriptions.

Leibish Gayer had arrived from Poland in 1934, and he remained the religious leader here until 1992. However, the Jewish community in the East End dwindled through the second half of the 20th century, moving to better housing and better lives in newer suburbs.

By the early 2000s, the synagogue had a reduced capacity of just 150, and attendances continued to fall gradually as the local Jewish population in the East End declined in numbers. A movable curtained trellis mechitzah was installed at the rear of the ground floor for a dwindling number of elderly women, so that they no longer had to climb the stairs to the original women’s gallery on the second floor.

The last regular service was held on 22 September 2007. However, the synagogue was reopened for services on the ‘High Holydays’ (Rosh Hashanah and Yom Kippur) in 2008 and, for a while, other services were held from time to time.

Around this time, one observer noted, ‘There is a lonely grandeur to the place today, worn and dusty now but still with evidence of the attention exercised in its care. Fine gilt texts upon panels around the balcony record benefactors and commemorate loved ones, never to be forgotten.’

Regular services had ceased by November 2009, and the synagogue was open only once a month for a symbolic Shabbat Services. The synagogue finally closed its doors in 2014. 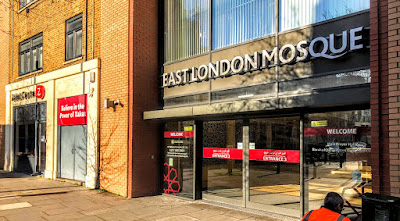 The Federation of Synagogues sold the building to the East London Mosque in 2015 (Photograph: Patrick Comerford, 2020)

The Federation of Synagogues sold the building in March 2015 to the East London Mosque, which by then enclosed the small synagogue building on three sides and dwarfed it.

Makespace Architects designed a conversion in which the synagogue furnishings were removed in 2016 and a new shopfront was created for a Zakat Centre, receiving Muslim donations to Islamic charities.

The changes at Fieldgate Street illustrate the story of the changing cultural and religious diversity of the East End. This diversity is celebrated in the Jewish, Christian and Muslim symbols, including a Star of David, that decorate the Fieldgate Oasis, opened on 18 August 2009 by Councillor Abdal Ullah of Tower Hamlets Council.

A verse at the base reads,

Life is but a stopping place,
a pause in what’s to be,
A resting place along the road,
to sweet eternity. 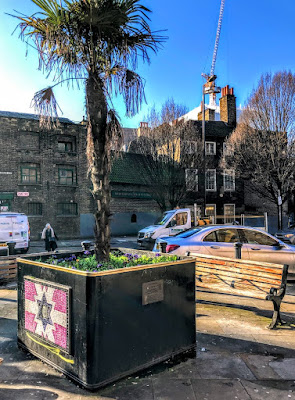 A Star of David on the Fieldgate Oasis … recalling the Jewish community that once defined Fieldgate Street (Photograph: Patrick Comerford, 2020)