San Nicolás: a Gothic and
Baroque jewel that is the
‘Sistine Chapel’ of Valencia 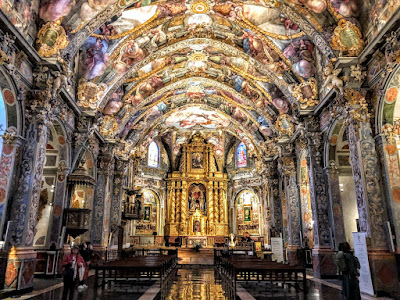 The Church of San Nicolás de Bari and San Pedro Mártir has been called the ‘Sistine Chapel’ of Valencia and a ‘Baroque jewel’.

The church is one of the finest examples of a Gothic church with baroque decorations. Frescoes and plasterwork cover the entire interior, from small pilasters in chapels, to the walls, apse and vaulted ceiling, creating a visual and colour spectacle.

The Church of Saint Nicholas in Valencia is tucked quite nicely into the streets of the old town. It is almost hidden from view in a laneway off Calle Caballeros, adding to the surprise awaiting visitors. 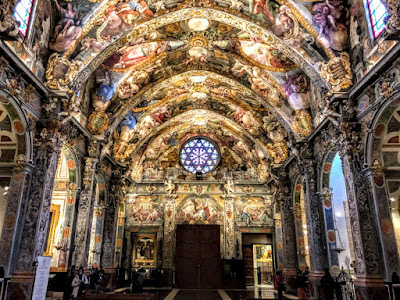 The church stands on the site of a Roman temple and a later mosque (Photograph: Patrick Comerford, 2020)

The church stands on the site of a Roman-Hispanic temple that later became a mosque with the Muslim conquest of the area. The church was founded in the 13th century as one of the first 12 parish churches in the city following the reconquest of Valencia by King James I in 1238, and from an early stage was associated with the Dominicans.

The church was built ca 1242, with a layout that includes a single-nave with six side chapels between the buttresses and polygonal apse.

The church was remodelled on the initiative of the Borja family in the Gothic style between 1419 and 1455, with the Gothic rib vault contracting in the central nave. The refurbishments include a rose window alluding to a miracle of Saint Nicholas.

Pope Callixtus III (1455-1458), also known as Alfonso de Borja, was the Rector of the Church of San Nicolás from 1418 and Bishop of Valencia from 1429 before becoming Pope in 1455. A plaque nearby recalls the prediction of Saint Vincent Ferrer that Alfonso de Borja would become Pope and would then canonise him. 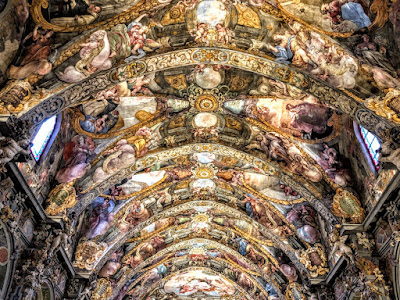 The interior of the church was completed between 1690 and 1693 (Photograph: Patrick Comerford, 2020)

The interior of the church was completed between 1690 and 1693, and was decorated in the baroque style by Juan Pérez Castiel.

The interior was filled with and frescoes depicting the lives and miracles of the two patrons of the church, Saint Nicholas of Bari and Saint Peter of Verona or San Pedro Mártir (Saint Peter Martyr).

Saint Nicholas of Bari or Myra is the guardian of children and the source of the stories about Santa Claus. Saint Peter Martyr was a 13th century Dominican friar from Verona who was martyred in 1252, and is remembered for miracle involving a dying child in his church. 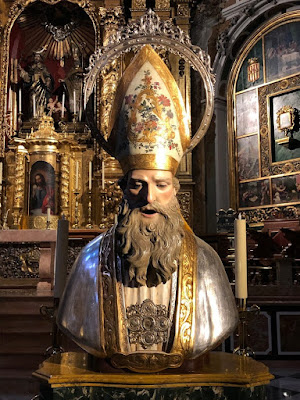 The reliquary of Saint Nicholas in front of the High Altar(Photograph: Patrick Comerford, 2020)

The stories from the life of Saint Nicholas told in the frescoes include the healing of an old woman, the miracle of the three young women, the restoration of a dying child, the rescue of three children and an innkeeper’s conversion, the humiliation of Arius at the Council of Nicaea, and the death of Saint Nicholas.

The frescoes also include a self-portrait of Antonio Palomino and Dionis Vidal on the west wall. The window on the West Wall is in the shape of the Star of David.

The 18th century reliquary at the High Altar contains a relic of Saint Nicholas.

The baroque organ dates from the 18th century.

The gate overlooking the square of San Nicolás is a neo-gothic 19th-century recreation. 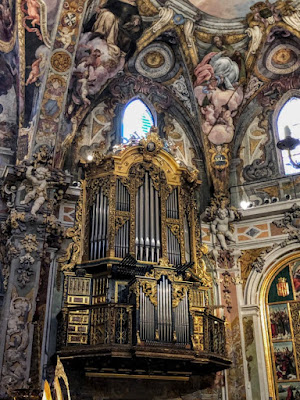 The Church has been restored recently, revealing a pictorial display that experts have called the ‘Sistine Chapel’ of Valencia. The restorations were overseen by the former director of the restorations at the Sistine Chapel in the Vatican. The restoration has been classified as ‘the most important architectural and pictorial-ornamental work ever carried out anywhere in the world due to the scale of the work and the techniques used.’

The project was completed in collaboration with the Faculty for Heritage Restoration at the Technical University of Valencia (UPV) and with support from the Hortensia Herrero Foundation.

The church still preserves some traditional devotions, including the famous ‘Walking on Saint Nicholas’ or Devotion to Saint Jude Thaddeus, patron of lost causes, on Mondays. This means the church is closed to tourist visits on Mondays, but it is open Tuesday to Friday from 10:30 to 19:30, and on Saturdays from 10:30 to 18:30. Tours are available in English and Spanish. 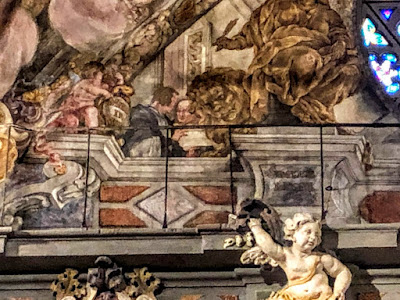 The self-portrait of Antonio Palomino and his pupil Dionis Vidal on the west wall (Photograph: Patrick Comerford, 2020)