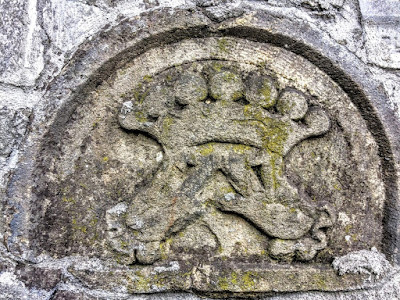 Hands raised in the priestly blessing on a gravestone in the Jewish cemetery in Kraków (Photograph: Patrick Comerford)

If we are all coughing into our elbows instead of our hands, surely it would be safer to shake hands than to bump elbows?

Until all church services in my diocese were cancelled yesterday, I imagine the exchange of peace in many churches tomorrow with people more likely to grin or grimace at each other than to shake hands or bump elbows. I even imagined some people joining hands in a prayerful gesture and bowing to each other, like Japanese monks or Mother Teresa’s nuns.

On one social media page earlier this week, there was a suggestion that we should use Mr Spock’s ‘live long and prosper’ raised hand gesture in Star Wars, which was based on the blessing gesture of the cohanim or Jewish priestly caste. However, posters were quick to respond that only cohanim are allowed to use this hand gesture.

Mr Spock was a half-human, half-Vulcan character in Star Trek, portrayed by Leonard Nimoy, who died five years ago, on 27 February 2015.

Spock became known for his ‘Live Long and Prosper’ divided-finger hand gesture based on the hands raised in blessing by the cohanim. This motif is often seen on the gravestones of cohanim or descendants of the priestly tribe, and in synagogues in the decoration of the Aron haKodesh or Holy Ark holding the Torah Scrolls.

Nimoy was born in Boston, the son of Jewish immigrants from Ukraine. He spoke Yiddish and in later life was immersed in Jewish heritage and culture. The ‘Vulcan Salute’ was among Spock’s recognised and unique symbols. Nimoy created the single-hand sign himself from his childhood memories of the way cohanim hold both hands when speaking the blessing (Numbers 6: 24-26):

Nimoy summarised this blessing in his own catchphrase, ‘Live long and prosper.’

He explained that while attending synagogue services as a child, he peeked from under his father’s tallit or prayer shawl and saw the gesture. He thought the priestly gesture looked sufficiently alien and mysterious when he made it part of Star Trek lore.

Late in his career, Leonard Cohen often ended concerts with the Priestly Blessing, reciting it in Hebrew.

Cohen (כֹּהֵן) is a common Jewish surname, and it often indicates – though not always – that someone is descended from Aaron the Priest, brother of Moses, and their patrilineal ancestors were priests in the Temple in Jerusalem. A single priest is known as a cohan, and the hereditary caste is known collectively as the cohanim.

On the other hand, the title comer (כומר) describes a Christian priest, and is used in modern Hebrew for Anglican Orthodox and Roman Catholic priests, and for Protestant ministers, rather than the word cohan, which continues to be reserved for a Jewish priest.

As languages changed in the diaspora, the name Cohen acquired many variants. Not every family with related surnames are cohanim, and not all cohanim have related surnames. In the Tsarist Empire, where Jewish males were conscripted, there was an exemption for priests and some men are said to have claimed to be cohanim to avoid being drafted.

Some cohanim families have added a secondary name to their surname to distinguish themselves from other cohanim. The Cohen-Scali family in Morocco, for example, trace themselves back to the priest Zadok, and the Cohen-Maghari or Meguri family from Yemen trace their ancestry back to Jehoiariv, the first of the 24 priestly divisions.

But if being a cohan is a privilege it also brings limitations in Jewish law. For example, a cohan may not marry a divorced woman, may not marry someone who has converted to Judaism, and should not come into contact with the dead or enter a cemetery. 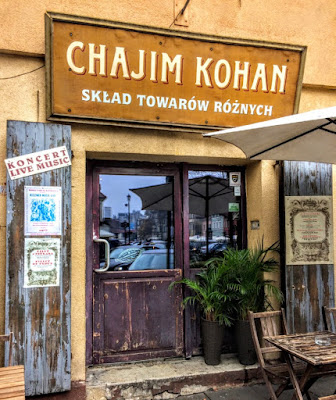 The Kohan name on a café in Kraków (Photograph: Patrick Comerford)

An effort to trace whether people named Cohen actually have a common genetic origin is using a genealogical DNA test associated with the Cohen Modal Haplotype.

Other variants include Kaplan and Rappaport. The Kaplan name is said to have similar roots to the word chaplain. The Rappaport family claim descent from a famous family of cohanim from Italy, the Rapas of Porto, including Rabbi Avraham Menachem Rapoport, author of Minchah Belulah. A popular family story says the Vilna Gaon, Rabbi Eliyahu, said they are the only family of cohanim known to be meyuchasim or of provable status.

Some variants of the name can even sound like Irish surnames, such as Quinn, Keohan, Keane, Conway or Cowan. The Greek forms include Koen, Kots, Kotais, Kotatis and Kothanis. 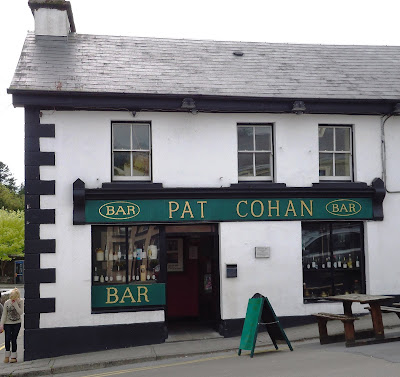 The Priestly Blessing (ברכת כהנים; birkat cohanim), is known in rabbinic literature as raising the hands or rising to the platform because the blessing is given from a raised rostrum.

The Jewish Sages stressed that although the priests are the ones carrying out the blessing, it is not them or the ceremonial practice of raising their hands that results in the blessing, but rather it is God’s desire that his blessing should be symbolised by the hands of the cohanim.

The former Chief Rabbi, Jonathan Sacks, says the Torah explicitly says that though the cohanim say the words, it is God who sends the blessing: ‘When the cohanim bless the people, they are not doing anything in and of themselves. Instead they are acting as channels through which God’s blessing flows into the world and into our lives.’

He adds, ‘Only love does this. Love means that we are focused not on ourselves but on another. Love is selflessness. And only selflessness allows us to be a channel through which flows a force greater than ourselves, the love that as Dante said, “moves the sun and the other stars”, the love that brings new life into the world.’

The practice continued in synagogues after the destruction of the second Temple in Jerusalem, and today in most Jewish communities, cohanim bless the worshippers in the synagogue during special services.

Only male cohanim over the age of 13, in direct male line of descent from Aaron, may perform the Priestly Blessing. And the blessing should be performed only in the presence of a minyan or quorum for worship, even if the cohanim themselves must be included for a total of 10 adult males.

All cohanim present should to take part, unless disqualified in some way, such as drinking too much alcohol, having a severe speech impediment, blindness, having taken a human life, having married a disqualifying wife such as a divorcee or convert, or the recent death of a close relation.

In many communities, it is customary for men in the congregation to spread their tallitot or prayer shawls over their own heads during the blessing and not look at the cohanim. If a man has children, they come under his tallit to be blessed.

A tradition among Ashkenazim says that during this blessing, the Shekhinah becomes present where the cohanim have their hands in the shin gesture, so that gazing there would be harmful.

An understanding of how the God’s light is thought to be present through the outstretched fingers of the cohanim may lie behind the well-known lines of Leonard Cohen: 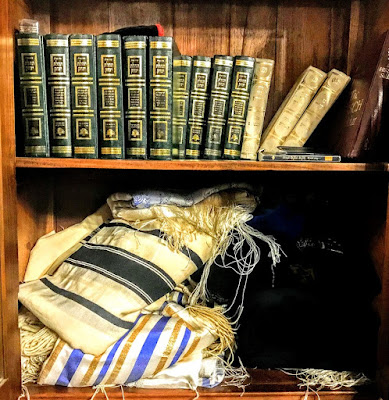 Prayer shawls and prayer books in the Etz Hayyim Synagogue in Chania, Crete … a man’s children come under his tallit to be blessed (Photograph: Patrick Comerford, 2019)

The text of the Priestly Blessing is also used by Jewish parents to bless their children on Friday night before the Shabbat meal. It is usually prefaced, for boys with the prayer, ‘May God to make you like Ephraim and Manasseh’ (see Genesis 48: 20), because these sons of Joseph never fought with each other; and for girls, the traditional prayer, ‘May God make you like Sarah, Rebecca, Rachel and Leah.’ The blessing is often said to the bride and groom under the chuppah.

Rabbi Jonathan Sacks says this is among the oldest of all prayer texts, and he describes it as the simplest and most beautiful of all blessings.

He points out that the words have a strong rhythmic structure. The first part refers, to material blessings: sustenance, physical health and so on; the second part refers to a moral blessing or grace, what we show to other people and they to us; but, he says, the third blessing, for is the most inward of all, and that without peace no blessings can be enjoyed.

Lord Sacks points out that the Hebrew name Hashem used for God in the priestly blessings, and in almost all the priestly texts, names God as he relates to us as persons, individuals, each with our unique configuration of hopes and fears, gifts and possibilities. Hashem is the aspect of God that allows us to use the word ‘You’ in addressing God. He is the God who speaks to us and who listens when we speak to him.

He says that knowing God turns his face towards us – that we are not just an indiscernible face in a crowd, but that God relates to us in our uniqueness and singularity – ‘is the most profound and ultimate source of peace.’

‘Faith means that I believe that God cares about me. I am here because he wanted me to be. The soul he gave me is pure … We do not need to prove ourselves in order to receive a blessing from God. All we need to know is that his face is turned toward us. When we are at peace with ourselves, we can begin to make peace with the world.’

‘To bless, we must love, and to be blessed is to know that we are loved by the One vaster than the universe who nonetheless turns His face toward us as a parent to a beloved child. To know that is to find true spiritual peace.’ 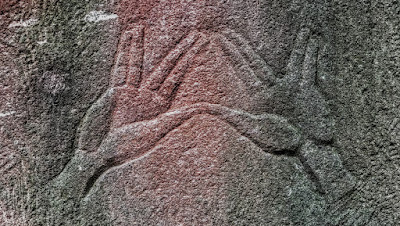 Hands raised in the priestly blessing on a Holocaust memorial in Berlin (Photograph: Patrick Comerford, 2018)