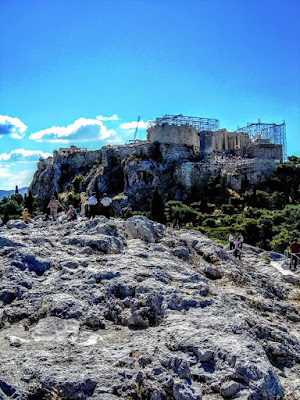 The Hill of the Areopagos in Athens, looking across to the Acropolis (Photograph: Patrick Comerford)

There is a link to readings HERE. 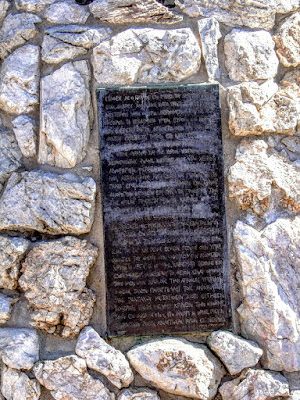 Saint Paul’s words inscribed on a plaque on the Areopagos in Athens (Photograph: Patrick Comerford)

An early Christian thinker, Tertullian, once asked, ‘What has Athens to do with Jerusalem?’

What have the ways of the world got to do with the way we live our life as Christians?

How does God respond to the cry of the poor?

How is God present in our lives?

How do we live a life of love that shows we know the love of God, Father, Son and Holy Spirit?

Where do we find God in the midst of all this?

All these questions are asked regularly, and this morning’s readings are a reminder that God never leaves us alone.

This is what the Apostle Paul is saying at the Areopagos in Athens in this morning’s reading from the Acts of the Apostles (Acts 17: 22-31). The people who worshipped the unknown God on the slopes beneath the shadow of the Acropolis were assured that God had heard their prayers, and they are now being invited to join in communion with this God through Saint Paul’s proclamation.

The Stoa of Attalos is one of the many splendid buildings beneath the slopes of the Acropolis in Athens. This stoa (στοά), covered walkway or portico in the Agora was built by and named after King Attalos II (159-138 BC) of Pergamon. Its arcades were divided into shops and stalls, and it was a popular place for wealthy Athenians to meet and gossip.

There were many stoas in Athens, including the Stoa Poikile or Painted Porch, built in the fifth century BC on the north side of the Agora.

This is where we find Saint Paul this morning, in one of the most famous sites in ancient Athens. Its fame was enhanced by the paintings and loot from wars displayed there. It was in this porch that Zeno of Citium ca 333-262 BC) taught Stoicism, the philosophical school that takes its name from this place.

The Stoics believed in a god, and this god played an important role in their general philosophy. But Stoic theology was fluid in its concept of god. Zeno argued that the cosmos is an intelligent being, although he seems not to have explicitly identified that intelligent being as God.

According to the Roman orator and philosopher Cicero, the Stoics recognised four main questions in theology: they prove that the gods exist; they explain their nature; they show that the world is governed by them; and that they care for the fortunes of humanity.

Essentially, Stoicism is a philosophy of personal ethics. It teaches that the path to happiness is found in accepting this moment as it presents itself, by not allowing ourselves to be controlled by our desire for pleasure or our fear of pain, by using our minds to understand the world around us and to do our part in nature’s plan, and by working together and treating others in a fair and just manner.

The Stoics taught that emotions resulted in errors of judgment that were destructive, due to the interaction between cosmic determinism and human freedom, and the belief that it is virtuous to maintain a will that is in accord with nature. To live a good life, they taught, one had to understand the rules of the natural order since they taught that everything is rooted in nature.

Later Stoics believed that virtue is sufficient for happiness.

During his visit to Athens, the Apostle Paul debates with Stoic and Epicurean philosophers in the stoa, the marketplace or the agora. They take him to the shrine of the unknown god at the Areopagos (see Acts 17: 16-19).

Saint Paul tells them that they already know God in their hearts, they just have to come to realise who God is. In his speech at the Areopagos, Saint Paul also quotes the Cretan philosopher Epimenides: ‘In him we live and move and have our being.’

Epimenides was a poet and philosopher from Knossos, so he was familiar with the ancient Greek myths. All of his works are now lost, but he is remembered because he popularised the story in Crete that Zeus was dead, which led him to being condemned as a liar by his Greek contemporaries, and because he is quoted by Saint Paul not once but twice in the New Testament.

At the Areopagos in Athens (see Acts 17: 22-34), Saint Paul, quotes from Epimenides, reference to one of ‘your own poets,’ when he says: ‘For “In him we live and move and have our being”.’

Later in the New Testament, when Saint Paul writes to Saint Titus about his mission in Crete, he commits a logical fallacy by quoting Epimenides: ‘It was one of them, their very own prophet, who said, “Cretans are always liars, vicious brutes, lazy gluttons.” That testimony is true’ (Titus 1: 12-13a).

The ‘lie’ of the Cretans is that Zeus was mortal, for Epimenides believed that Zeus is dead. The logical inconsistency of a Cretan asserting that all Cretans are always liars may not have occurred to Epimenides, nor to Callimachus, who both used the phrase to emphasise their point, without irony.

However, Saint Paul must have thought long about the idea of a dead god and the dead god’s tomb as he sought to preach the Resurrection Athens and in Crete.

The American theologian John Piper is a fundamentalist whose views on women and Jews I find misogynist and bordering on the antisemitic. Dismissing the horrors of domestic violence, he has said, ‘If her husband isn’t requiring her to sin, but simply hurting her, then i think she endures verbal abuse for a season, she endures perhaps being smacked one night, and then she seeks help from the church.’

In his latest book, Coronavirus and Christ, Piper claims that Covid-19 is God’s judgment on society, and singles out, among other things, gay people as a deserving ‘due penalty.’ When I hear things like this, I wonder whether preachers like this believe in the dead Zeus rather than the Risen Christ and the God in whom ‘we live and move and have our being.’

The old myths and superstitions are dead and gone, and with them the false expectations and demands they made on us. But the one true God has been with us always. This is Saint Paul’s message to the people of Athens in the first century.

We do not believe in a superstitious way in a god like Zeus who exerts his control over weak humans in an angry and vengeful way, sending plagues and viruses to wipe us out as a way of asserting his control.

In this time of pandemic lockdown, as people ask where God is in the middle of this crisis, perhaps we should realise that he is at work through everyone who is already doing God’s work. And we should rejoice in this and affirm this. 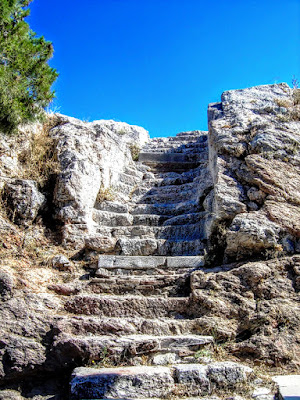 The steps leading up to the top of the Areopagos (Photograph: Patrick Comerford)

[Jesus said:] 15 ‘If you love me, you will keep my commandments. 16 And I will ask the Father, and he will give you another Advocate, to be with you for ever. 17 This is the Spirit of truth, whom the world cannot receive, because it neither sees him nor knows him. You know him, because he abides with you, and he will be in you.

18 ‘I will not leave you orphaned; I am coming to you. 19 In a little while the world will no longer see me, but you will see me; because I live, you also will live. 20 On that day you will know that I am in my Father, and you in me, and I in you. 21 They who have my commandments and keep them are those who love me; and those who love me will be loved by my Father, and I will love them and reveal myself to them.’ 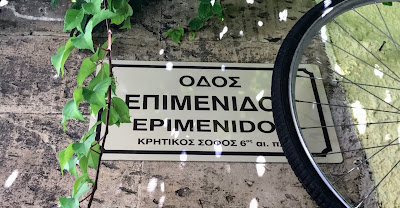 Epimenidou Street in Rethymnon … the philosopher from Crete gives his name to streets in towns and cities throughout Crete (Photograph: Patrick Comerford, 2017)

God our Father,
whose Son Jesus Christ gives the water of eternal life:
May we also thirst for you,
the spring of life and source of goodness,
through him who is alive and reigns with you
and the Holy Spirit,
one God, now and for ever.

Dismissal (from Easter Day to Pentecost): 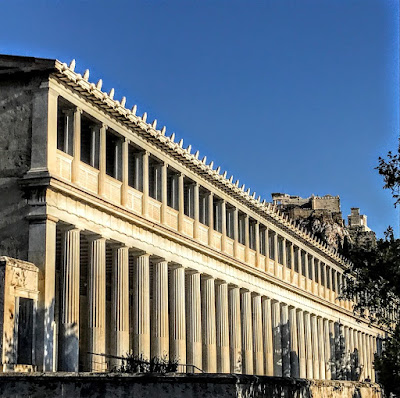 ‘What has Athens to do with Jerusalem?’ (Tertullian) … the Stoa of Attalos, beneath the slopes of the Acropolis in Athens (Photograph: Patrick Comerford)

This sermon was prepared for Sunday 17 March 2020, the Sixth Sunday of Easter, and was part of a celebration of the Eucharist in the Rectory, Askeaton.

The hymn suggestions are provided in Sing to the Word (2000), edited by Bishop Edward Darling. The hymn numbers refer to the Church of Ireland’s Church Hymnal (5th edition, Oxford: OUP, 2000). 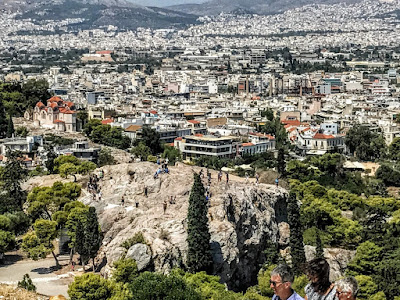 ‘Lord of the boundless curves of space’ (Hymn 31) … looking across the Hill of the Areopagos and Athens from the Acropolis (Photograph: Patrick Comerford)