Finding Matthew Comberford,
elegant comb maker among
the Pirates of the Caribbean 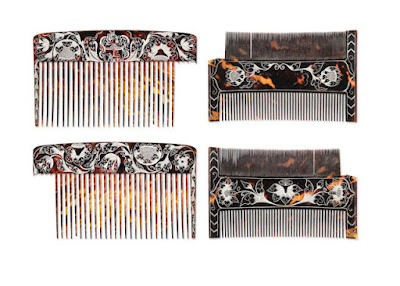 Between 1671 and 1692, Matthew Comberford and Paul Bennett were the key figures in the tortoiseshell industry in Port Royal in Jamaica. It was a key industry in Port Royal in the late 17th century, although the place is better known for its pirates who roamed the Caribbean at the time, as a centre of the slave trade, and for its rum and debauchery.

Port Royal, at the mouth of Kingston Harbour in south-east Jamaica, was founded by the Spanish in 1494 and was once the largest city in the Caribbean. It was the centre of shipping and commerce in the Caribbean by the second half of the 17th century, until it was destroyed by an earthquake and a tsunami on 7 June 1692.

Port Royal was once home to privateers who were encouraged to attack Spanish vessels at a time when England and other smaller European powers dared not make war on Spain directly. As a port city, Port Royal was notorious for its gaudy displays of wealth and loose morals. It was a popular home-port for the English and Dutch-sponsored privateers to spend their treasure during the 17th century.

The town was captured by England during the invasion of Jamaica in 1655. By 1659, 200 houses, shops and warehouses had been built around the fort, and by 1692 five forts defended the port.

The English initially called the port Cagway, but soon renamed it as Port Royal. For much of the period between the English conquest and the 1692 earthquake, Port Royal served as the unofficial capital of Jamaica, while Spanish Town remained the official capital.

Combs and comb cases of turtle-shell and tortoiseshell were made by Matthew Comberford and Paul Bennett of High Street, Port Royal, from 1673 until 1692, when Port Royal was devastated by the earthquake and tsunami.

These cases and combs have been described as being among ‘the earliest art objects made in the British West Indies displaying European influence.’ The business has been described in detail by Philip Hart in his paper ‘Tortoiseshell Comb Cases: a 17th century Jamaican Craft’ in Jamaica Journal, the quarterly journal of the Institute of Jamaica, Vol 16, No 3 (August 1983), pp 13-20.

Paul Bennett and his successor Matthew Comberford ran Workshops on the High Street in Port Royal, cutting and engraving the shells of the local hawksbill turtle. A spectacular example of their craft was a comb in a case inscribed ‘Port Royal in Jamaica’ and dated 1688. It sold for $22,000 at Sotheby’s in New York in 2018.

Two turtles-hell combs made in Port Royal by Comberford and Bennett in the last quarter of the 17th century were sold at auction for £1,657 (€1,825), including premium, by Bonham’s in Oxford earlier this year (19 February 2020).

The decoration on their surviving comb cases seems to suggest there were two distinct phases of production, possibly following the death of Paul Bennett and when the business was the taken over by Matthew Comberford, who was living in Port Royal from 1673.

The first of the combs sold by Bonhams this year, has well-spaced long teeth, engraved with a coat of arms between flowers and leaves. It measures 24 cm wide x 14.5 cm high. The second comb was double-sided, measuring 21.5 cm wide x 13 cm high.

The catalogue noted that the coat of arms engraved on one of these combs is most unusual. Coats of arms are usually found on comb cases, but more rarely on the combs themselves, and this coat-of-arms has not been identified.

British settlers in Jamaica in the last half of the 17th century brought with them coats of arms to which they were not necessarily entitled. These were often the rightful arms of unrelated armigers with the same surname. Others invented their own arms, often using the exotic flora and fauna of Jamaica. The tree on this comb may well be a palm, native to Jamaica.

Elegant comb-making, with fine art work and heraldic embellishments, seems an unlikely refined business in a Caribbean port associated with pirates and privateers, slave trading and sugar plantations, rum and excessive debauchery. But it caught the imagination of even the most famous pirate of all.

Sir Henry Morgan, better known as a pirate or privateer, was Lieutenant Governor of Jamaica from 1674 to 1682, while Matthew Comberford was living and working in Port Royal. Morgan sent a present to Sir William Coventry in 1676 of ‘two large turtle-shell combs in a case of the same,’ describing them as of ‘no value’ but possibly of interest. Perhaps they too were made by Matthew Comberford.

Matthew Comberford was living in Port Royal from 1673 to 1692. But I have yet to establish his family background.

Was he a member of the Comberford family from Staffordshire?

Was he a member of a branch of the Comerford family in Ireland?

Did he survive the earthquake and tsunami in 1692?

I am being merely speculative when I wonder whether he was related to Nicholas Comberford, the 17th century Stepney cartographer, who was born in Kilkenny and a member of the London Drapers’ Company.

Other researchers ask about the details of Matthew Comberford’s cartoon. Was he a comb-maker, an engraver or a craftsman in tortoiseshell?

As for Port Royal, after the disaster in 1692, its commercial role was steadily taken over by the nearby Kingston, which was designated the capital of Jamaica in 1872. Severe hurricanes have regularly damaged Port Royal, and there was another severe earthquake in 1907.

Port Royal was the one of the settings for the film Captain Blood (1934) starring Errol Flynn. More recently, Port Royal has been featured as a location in Disney’s Pirates of the Caribbean series, although much of the location work for Port Royal was actually carried out on the island of Saint Vincent and not in Jamaica.

Plans were put forward in 1999 to redevelop the small fishing town as a heritage tourism destination to serve cruise ships. The plans envisaged Port Royal capitalising on its unique heritage, with archaeological findings from pre-colonial and privateering years providing the basis for possible attractions. 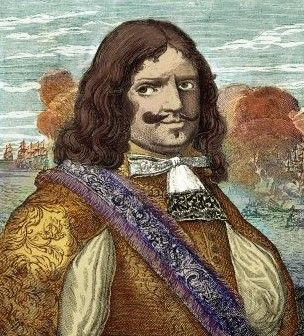 Looking forward to hearing more about your research into your genealogy.