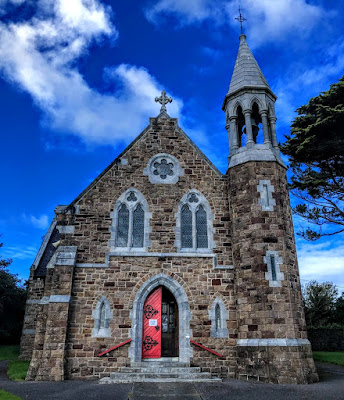 The Church of the Immaculate Conception in Knightstown, Valentia … designed by Ashlin and Coleman and built in 1914-1915 (Photograph: Patrick Comerford, 2020)

The island also has two Roman Catholic churches that I visited on this ‘road trip.’ The Roman Catholic parish on Valentia Island was created about 1819.

The first church in that parish was built at Chapeltown, and a second church was built at Knightstown as the number of workers at the Cable Station continued to expand. 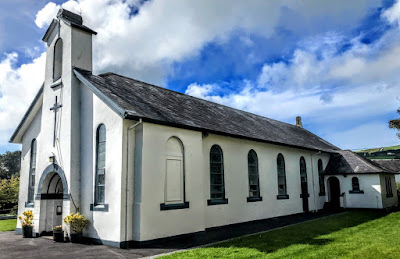 The Church of Saint Dorarca and Saint Teresa was built in Chapeltown in 1939 (Photograph: Patrick Comerford, 2020)

Chapeltown is one of the many villages developed around newly-built churches after Catholic Emancipation in the 1830s. The present church in Chapeltown was built in 1939 and is dedicated of Saint Dorarca and Saint Teresa.

Saint Dorarca is the patron saint of Valentia. She is said to have been one of Saint Patrick’s sisters and to have been the mother of 19 children.

Chapeltown, known in Irish as An Caol, is the second major settlement on the island. The village is in the centre of the island, about 4 km from Knightstown and about 3 km from the bridge linking Valentia to the mainland at Portmagee. To the north of the village, Geokaun mountain dominates the northern skyline. 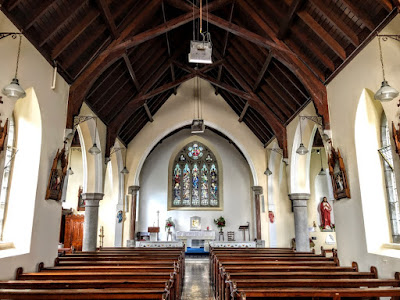 Inside the Church of the Immaculate Conception in Knightstown (Photograph: Patrick Comerford, 2020)

The Church of the Immaculate Conception on the Promenade in Knightstown was paid for by the people who worked at the Cable Station and by local people.

It was designed in the Gothic-revival style by Ashlin and Coleman, the architectural partnership of George Coppinger Ashlin (1837-1921) and Thomas Aloysius Coleman (1865-1950). Ashlin was noted for his work on churches and cathedrals throughout Ireland, including Saint Coleman’s Cathedral, Cobh, and was AWN Pugin’s son-in-law.

The Church of the Immaculate Conception was built in 1914 and dedicated on 1 August 1915. This is a cruciform-plan, double-height, Gothic Revival church. It is oriented on a west/east axis instead of the traditional east/west liturgical axis, but this gives beautiful views of the sea to people as they leave the church by the front door. 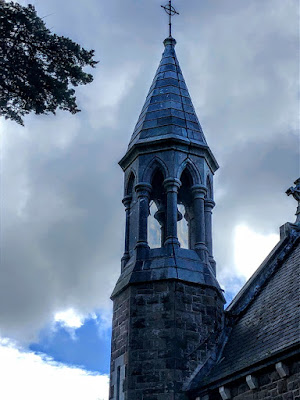 The open belfry and spirelet is a feature of the Church of the Immaculate Conception in Knightstown (Photograph: Patrick Comerford, 2020)

The church has a three-bay nave, single-bay transepts at the north and south sides, a two-bay chancel at the west gable end, a two-bay single-storey sacristy projection, an entrance bay at the east gable end, and a single-bay, two-stage corner turret at the north-east, with an octagonal plan, a limestone ashlar open belfry at the upper stage and a spirelet above.

The roofs, appropriately, are of pitched Valentia slate. There are decorative ridge tiles, cut-stone coping at the gables with finials, a coursed rubble stone chimneystack and a limestone ashlar flue.

The coursed rubble stone walls have a continuous cut-limestone sill course and cut-limestone brackets at the eaves. There is a base batter at the plinth of the turret with cut-stone coping and the cut-limestone open belfry at the upper stage.

The lancet arch door at the east gable end (the liturgical west end) has a cut-limestone, block-and-start, fielded doorcase with timber double doors. There are paired lancet arch window openings and a rose window over the entrance. 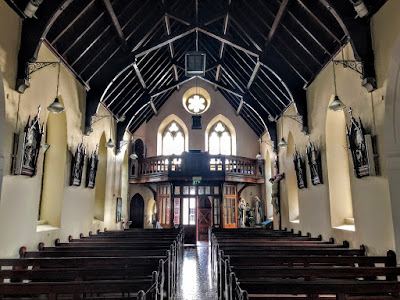 The Church of the Immaculate Conception has an open scissors-truss timber roof (Photograph: Patrick Comerford, 2020)

Inside the church, the full-height interior opens into the open scissors-truss timber roof. There are decorative tiles on the floor, timber pews, carved timber Stations of the Cross, a pointed-arch chancel arch on moulded corbels, and an organ that came from an opera house in Piccadilly, London.

The sanctuary was refurbished in the 1960s to meet the needs of the liturgical reforms introduced by Vatican II. 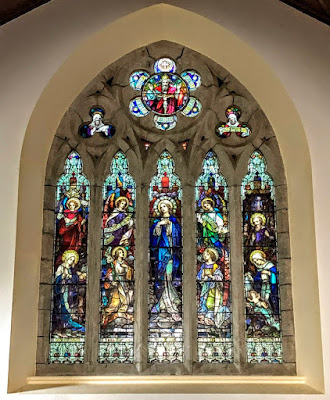 The five-light window by the Earley Studios above the altar in Knightstown (Photograph: Patrick Comerford, 2020)

The five-light traceried window above the altar in the west end (liturgical east) is filled with a stained-glass window made by the Earley Studios in Dublin 1916-1917.

This window was donated to the church by the Galvin family of the Royal Valentia Hotel in Knightstown, where we stayed for two or three days during that first week of this year’s ‘road trip.’ 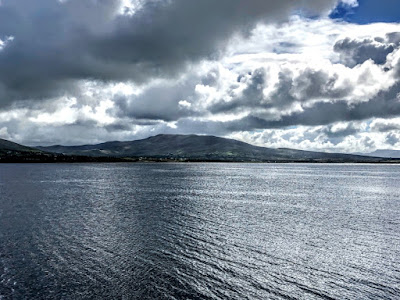 The view from the front porch of the Church of the Immaculate Conception in Knightstown (Photograph: Patrick Comerford, 2020)