Lismakeery, a ruined
mediaeval church and
site outside Askeaton 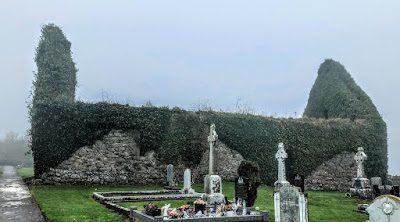 The church ruins at Lismakeery, seen from the north side (Photograph: Patrick Comerford, 2020)

Two signs mark the entrance into a small housing estate in Askeaton: one road-sign points into Lismakeara; a second, carved marker with the outline of a traceried, three-light Gothic window, names the estate as Lismakeera.

Both signs into this housing estate, opposite Colaiste Mhuire and Saint Mary’s Church of Ireland parish church, take their name from a mediaeval church site, about 3 km outside Askeaton.

Apart from Saint Mary’s Church, there are three church ruins within walking distance of Askeaton that have served as Church of Ireland parish churches in times past: the church at Morgans North (or Dysert), which I visited at the end of last month, and the churches at Lismakeery, near Creeves and Toomdeely, near the point where the River Deel flows into the Shannon Estuary.

The two signs at the entrance to the housing estate in Askeaton were an invitation to visit Lismakeery or Lismakeera earlier last week. 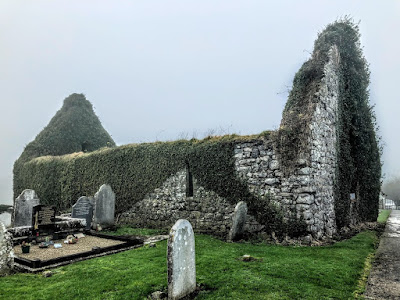 The church ruins at Lismakeery, seen from the south side (Photograph: Patrick Comerford, 2020)

The church site is about 3 km south-west of Askeaton, close to Altavilla and Creeves, on the west banks of the River Deel.

The name of Lismakeery comes the Irish Lios Mhic Thíre (‘he enclosure of Mac Tíre’), although one account claims the Irish means ‘MacKeery’s Fort.’

Lismakeera was a parish in the Diocese of Limerick from the early 14th century. When it was surveyed for Papal Taxation in 1302, the parish was referred to as Lismaceyre and later as Lismakeery.

Later in the 14th century, Lismakeery was held by the Augustinians of Keynsham Abbey, between Bristol and Bath in Somerset, along with Saint Mary’s Church, Askeaton, and a number of other churches and parishes in this part of Co Limerick.

After the Tudor Reformation in the 16th century, Lismakeery passed into the hands of the de Lacy family. James Roe Lacy, who held Lismakeery, was executed in Limerick in 1571 during the Desmond rebellion. Lismakeery then passed to John de Lacy of Ballingarry. 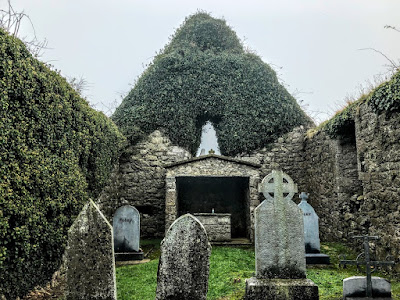 Dr Hugh Lacy, clerk (priest) and former Bishop of Limerick, was granted a 21-year lease of Lismakeery in 1577. He had been appointed Bishop by the Pope in November 1556 in succession to William Casey, who had been deposed that year by Queen Mary.

Lacy took the oath of allegiance to the Crown that year, and he remained in office during the first few years of Elizabeth I’s reign. He was the Queen’s Commissioner in Limerick in 1564, but he was deposed in 1571 as a supporter of the Pope and was replaced as bishop by his predecessor, William Casey.

By 1573, Lacy was described as an adherent of the Pope, and he was placed in the See House by the supporters of the Earl of Desmond in 1573.

As a ‘clerk’ or priest in the Diocese of Limerick and a former bishop, Lacy was granted a lease of Lismakeery in 1577, which indicates he was in good standing in the Church of Ireland once again. But he was under house arrest by 1579, and probably died in 1580.

It is an interesting but not exceptional anomaly that he appears on the lists of both the Church of Ireland and Roman Catholic Bishops of Limerick. 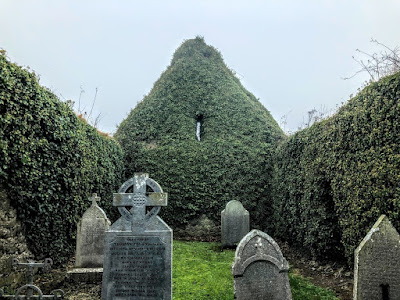 That year, Berkeley was also granted Askeaton Castle and 40 acres, offered to wall Askeaton, constituted the ‘Manor of Rock Barkley,’ and established a fair and weekly market in Askeaton.

Askeaton became a parliamentary borough, sending its own MPs to Irish House of Commons. Askeaton was incorporated by a charter of 1614, with a provost (or mayor) and 12 burgesses, and Edmond Drew was the first provost or mayor of Askeaton.

Meanwhile, in 1612, Berkeley leased Lismakeery to Edmond Drew, the Provost of Askeaton. Berkeley died at Askeaton Castle on 20 December 1615. 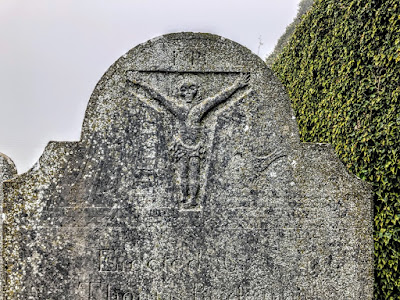 A Bateman family grave in Lismakeery with traditional signs of the passion, crucifixion and death of Christ (Photograph: Patrick Comerford, 2020)

From this time, there is a separate list of Vicars or Rector of Lismakeery in the Church of Ireland from 1617 until 1790.

The names of the Church of Ireland Rectors of Lismakeery are the same names as the Vicars of Askeaton at the time, with the addition of the Revd Cyprian Eames, who was the vicar in 1639, and the Revd Walter Finglass, who was a curate in 1703-1704 and a Vicar Choral of Saint Mary’s Cathedral, Limerick. 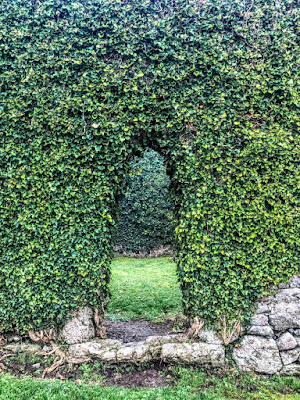 The north door of the church in Lismakeery, looking out into the churchyard (Photograph: Patrick Comerford, 2020)

The separate parish of Lismakeery seems to have been abolished or absorbed into the parish of Askeaton after William Sprigge died in October 1790.

In the Roman Catholic Church, the parish of Lismakeery continued to be associated with the de Lacy family. Dr Edmund Lacy of Conigar in Lismakeery and his brother, Father Thomas Lacy, who lived in exile, commissioned the ‘de Lacy Chalice’ in 1662.

Father David Lacy was registered as the Catholic pastor of Askeaton, Lismakeery and Toomdeely in 1704. Four years later, he was suspected of having Jacobite sympathies, and he was indicted in 1714 and again in 1719 for not taking the Oath of Abjuration. 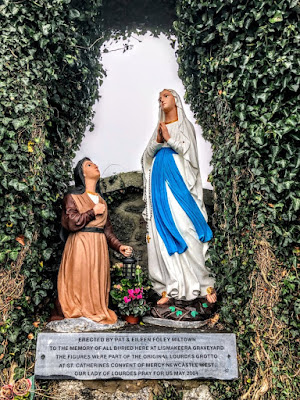 The Lourdes-style grotto inserted in the east wall in 2004 (Photograph: Patrick Comerford, 2020)

By 1837, Samuel Lewis noted in his Topographical Directory of Ireland that Lismakeery, also known as Lismacdiry, was ‘a rectory in the Diocese of Limerick, forming part of the union of Askeaton,’ and that ‘the tithes amount to £180.’ One of the leading families in the parish at the time was the Bridgeman family of Altavilla.

Lismakeery Church was known locally in the 1840s as the ‘de Lacy Church.’

The ruined church stands on a raised site and measures 59 ft in length and by 22 ft 6 in width. It dates from the 15th century but stands on the site of the earlier 13th century foundation. Archaeologists say there is evidence that part of one wall may date back to the eight century. 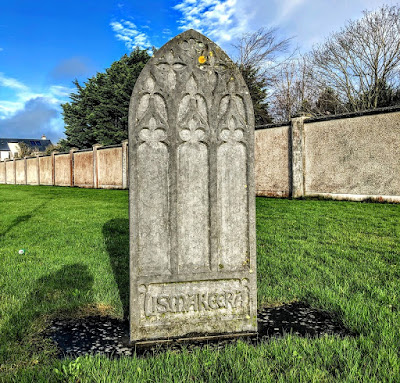 In recent decades, a canopied altar has been erected inside the ruins at the east end, and a ‘Lourdes Grotto’ shrine, originally in the Convent of Mercy, in Newcastle West, was inserted on the outside east wall by the Foley family in 2004.

The surrounding, rectangular graveyard measures about 60 metres north to south, about 30 metres east to west, and is enclosed by a stone wall. Most recent burials lie north of church, with a scattering of headstones south of church dating from the 19th and 20th centuries. There are many burials inside the church ruins too.

Some of the older gravestones I found include those of Welsh family (1787) and the Bridgeman family (1794 and 1809), with traditional symbols of the Passion and Crucifixion. 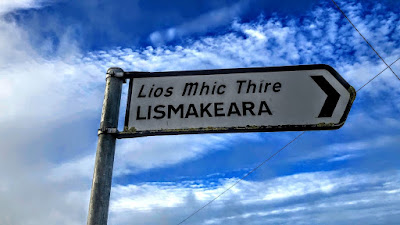