Monkstown House, built
in an ‘Italian-Byzantine’ style
for the Pim family in 1859 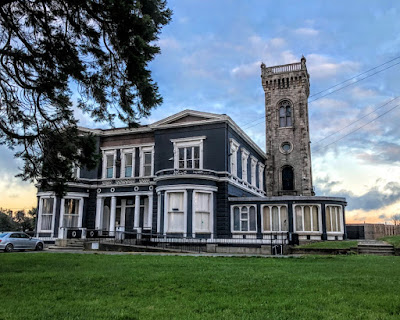 Monkstown House with its landmark tower, was designed by Carmichael and Jones for William Harvey Pim (Photograph: Patrick Comerford, 2020)

If Monkstown Castle is highly visible because of its prominent position on a busy roundabout in suburban Monkstown, Monkstown House might remain unnoticed by many people but for its prominent tower.

Monkstown House is tucked away in Monkstown Avenue, an almost-hidden cul-de-sac in Monkstown. It was designed in a mixed Italian-Byzantine style in 1859 by the architects Carmichael and Jones for William Harvey Pim (1811-1878). The builders were Roberts & Son, the clerk of works was William Dockrell, the contractors for the plaster and cement were Hogan & Sons and the ironwork is by Hodges & Sons.

Hugh Carmichael had been a pupil of William Deane Butler, and his partnership with Jones lasted until Carmichael died in 1860.

Alfred Gresham Jones (1824-1915) was born in Dublin, a son of George Jones, a merchant tailor. At an early stage in his career, Jones was awarded a Silver Medal by the Royal Dublin Society in 1843 or 1844 for his watercolour reconstruction of the Parthenon in Athens, a project whose influences can be seen in his designs for Monkstown House over a decade later.

After studying at the RDS School of Architectural Drawing, Jones spent some time in London. He returned to Dublin, and by 1852 was working with John Skipton Mulvany. A year later, he was working from his father’s home at 7 Garville Avenue, Rathgar. He formed a partnership with Hugh Carmichael in 1854.

After Carmichael died in 1860, Jones practised on his own. He was a member of the Blackrock Town Commission (1874-1875) for the Monkstown ward.

At the height of his successful, prolific career in Dublin, and for reasons that are still unexplained, Jones emigrated with his family to Australia in 1888. By then, he was already in his mid-60s, and he started a successful practice in Australia, where he also wrote poetry. He died in Melbourne in 1913 at the age of 91. 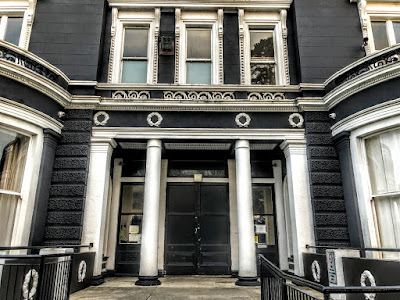 The original Monkstown House was the home of a Quaker merchant, Thomas Pim (1771-1855), who was born in Mountmellick, Queen’s Co (Laois). He was educated at Ballitore School, Co Kildare, before he was apprenticed to Joshua Edmundson, a linen draper in Dublin. He began trading as a merchant from the premises of his eldest brother, James Pim, at 69 Grafton Street. By 1802, he had become the principal in a partnership with his younger brother, Jonathan Pim (1778–1841), at 22 South William Street, Dublin.

The firm began as general merchants specialising in the import and wholesale distribution of cotton wool, and it soon built up a trade with New York, Liverpool, and the West Indies. The Pims’ business exported linen to all three markets and also supplied poplins to Liverpool and coarse cotton products to the West Indies.

They imported spices from the West Indies and sourced cotton wool directly from New York and indirectly from Liverpool, and also imported fancy goods. At home, they supplied fancy goods and poplins to the retail trade, but the largest constituent of their business was the supply of cotton wool to Irish manufacturers.

To maintain and expand the market for cotton wool, Thomas and Jonathan Pim often bankrolled customers such as James Greenham, who had a manufacturing concern at Roper’s Rest in Dublin. To finance his expansion, Greenham mortgaged the property to Thomas Pim and in 1808 built a weaving mill at Greenmount, Harold’s Cross. When he bought Temple Mills at Celbridge, Co Kildare, Greenham was employing 1,600 weavers and using 27 tons of cotton a week supplied by Thomas Pim.

Greenham encountered difficulties in 1813 and mortgaged his Harold’s Cross premises to Thomas and Jonathan Pim. Around the same time, the youngest Pim brother, Joseph Robinson Pim, joined the family business. Greenham went bankrupt in 1824, and from 1826 the firm headed by Thomas Pim took over running the Greenmount mills and added manufacturing to their growing number of businesses. The volume of goods being imported and exported had become so large that Thomas owned three ships: Hannah, Margaret, and Hibernia.

The partnership was restructured in 1831 as Joseph Robinson Pim and Thomas Pim began to devote more time to their shipping concerns. In 1834, they installed 100 power looms at the Greenmount mills, which by then used a mixture of water and steam power. The mills employed more than 300 workers, for whom the Pim brothers built cottages and gardens.

Thomas Pim was wealthy enough in 1841 to buy the adjoining premises at 23 South William Street. A year later, he was involved in the foundation of Pim Brothers on South Great George’s Street with his son, Jonathan Pim (1806-1885). His firm had become so large that it had agents in New York and London.

Thomas Pim had several other business interests. He was involved in the first attempts to found a Dublin Chamber of Commerce, was a founding shareholder of the Irish Marine Insurance Co, and was the first chair of the Dublin & Kingstown Railway Co, to which his family contributed 20% of the initial capital. He was involved in a mercantile and brewing partnership with his cousin James Pim, and was a director of the National Insurance Co. The business interests of his brother, Joseph Robinson Pim, included the Patriotic Insurance Co, the St George Steam Packet Co and the Irish Mining Co. 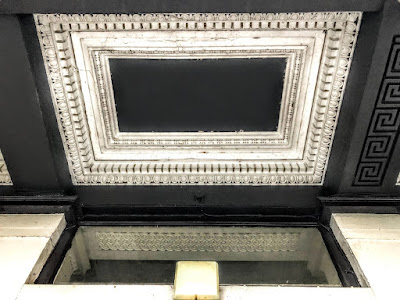 Thomas Pim of Monkstown House was one of the early Quakers involved in Monkstown Meetinghouse (Photograph: Patrick Comerford, 2020)

When Thomas Pim died in Dublin on 29 November 1855, he was described as one of the most distinguished merchants in the city.

His son, William Harvey Pim, who rebuilt Monkstown House, was born on 23 December 1811. He never married, and he died at Monkstown House on 19 November 1878, aged 66. William Harvey Pim’s brother, Jonathan Pim (1806-1885), was the secretary for the Quaker Relief fund during the famine and was Liberal MP for Dublin City from 1865 until 1874 – the first Irish Quaker to sit in Parliament. He was president of the Statistical and Social Inquiry Society of Ireland between 1875 and 1877. 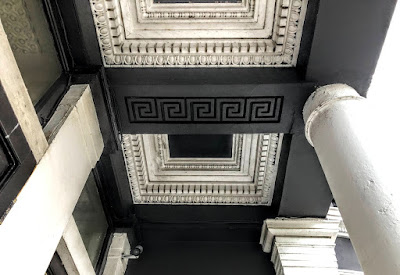 Monkstown House was offered as auxiliary hospital at the beginning of World War I (Photograph: Patrick Comerford, 2020)

During World War I, a number of private individuals offered their houses for use for the war effort, often as auxiliary hospitals. One of these was Monkstown House, which was offered by John Harold Pim, son of Thomas Pim.

The Liverpool-born architect Charles Herbert Ashworth (1862-1926) drew up the plans for conversion of Monkstown House into a private auxiliary hospital in 1914, including the addition of its landmark tower.

Ashworth was the architect to the Board of the Richmond, Whitworth and Richmond Hospitals and Monkstown House was the first auxiliary hospital to open in Ireland in October 1914.

Ashworth was also the architect of the Dublin Artisans’ Dwelling Company, which was pioneering the provision of distinctive, well designed, one- and two-storey houses for working class families throughout Dublin, including the Coombe, Portobello and Kingstown (Dún Laoghaire). Ashworth gave meticulous attention to the smallest details of design, construction, and maintenance.

He also had an extensive private practice, which included the design of the Bank of Ireland, Saint Stephen’s Green, the Royal Bank of Ireland, Dolphin’s Barn, bakeries, and factories, and he was architect to the Gaiety Theatre and the Theatre Royal in Dublin.

Monkstown House continued in use as a hospital until recent decades, and Conor, who lives in the caretaker’s apartment in the basement, explained how Monkstown House retains many of its original features and houses a number of community facilities.

As for Thomas Pim who died in the earlier Monkstown House in 1855, his descendants are found today in a large nexus of families, including the Bewley, Goodbody, Green, Griffin, Gwynn, Harvey, Haughton, Hogg, Jacob, McCoy, Kelly, Pim, Richardson and Wigham families. 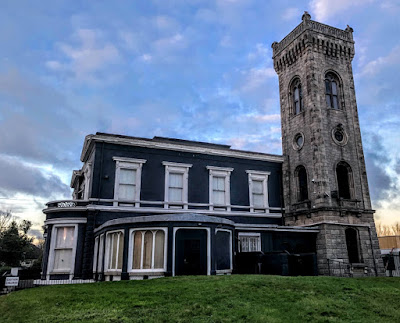 The descendants Thomas Pim of Monkstown House are found in a large nexus of families (Photograph: Patrick Comerford, 2020)